A box in the middle of nowhere 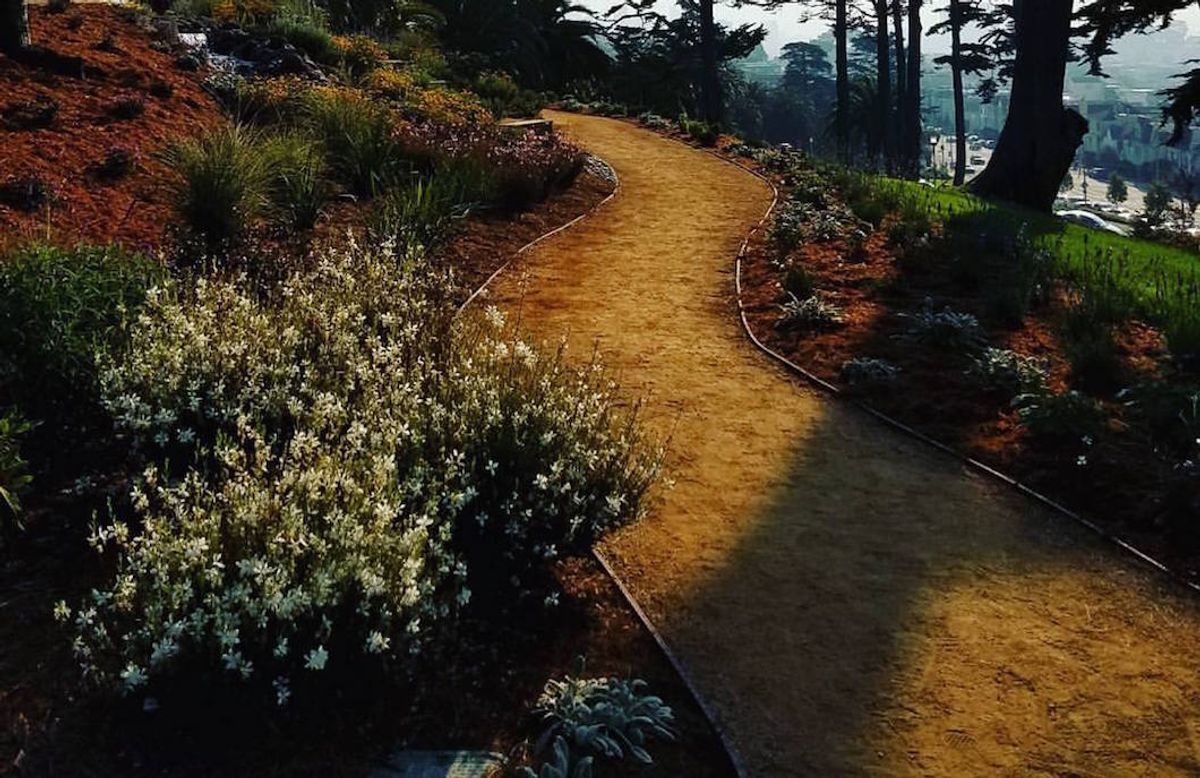 My watch froze at 7:07, many things could be attributed to its paralysis. Maybe it became paralyzed the moments time stopped for its wearer. Few are the moments in one’s life were life hits you with blows stronger than the human mind can process. Sometimes it makes you see colors where there once was plain canvases. Other moments it pulls at your lifeline and requires you to fall on your knees and pray to your deity or life itself.

The moments that embrace the human condition can be characterized as dramatic because of their impact on fast-paced “lifers.” Life truly never stops in reality, but it makes me question why it is that one has to suddenly stop and hold at the imaginary rails.

It was 7:00 pm, the wind was stronger than it had been in weeks. Its force was destructive to the point of ripping the scarf from my neck. I was in the middle of a forested trail going up a steep climb, towards my secluded hiding spot behind a group of trees at the top of the mountain. A minute had passed and thoughts began flashing through my mind as I escalated the dusty trail with bushes hiding stalker raccoons.

Every time I’ve told people my life anecdotes, there are always raccoons, to which I can assert their presence 99 percent of the time. I reached the top by 7:02 and took in the view. Before me were the peaks of a majestic church, the city to my left and the ocean to my right. I had to sit on the bench to prevent my death because no matter how many times I’ve gone up that trail I still have to catch my breath. Making sure no one saw me, I directed myself through the path between the dense line of trees and walked for 35 seconds exactly, until I reached the patch of land that was encircled by the trees.

The expiration date to abandon this place was arriving and a nostalgic wave began to swoon over me. I sat in the semicircle on the wooden box I had used as a chair all those months. The sun was setting and the ocean touched the sunset almost like a painting. Up here the wind was violent and the sounds from the city had ceased. The “Gandhi Spot” as I had come to refer it, was a place where I spoke to myself and maybe God. There was a mental shift where I bid the sunlight farewell some days and where I truly got to think.

The day was May 17 and thus the day my watch, at 7:07 completely stopped. I don’t believe in coincidences, but as I looked perplexed at my paralyzed watch it hypnotized me to the point of receiving a wave of realization. I realized how human I was. How, in a series of weeks of going through life like an automaton I had reached the top of the mountain, once more, with a change in my persona.

Perhaps I could argue the end of this moment in time had resulted in me being able to recite my whole notes on brain anatomy, but it was more than that. The lens through which I had viewed circumstances had shifted into a more focused shot. It was a moment in which perhaps the symbolic stop of time of the watch had ordered me to stop as well. There was a sudden necessity to crawl into my mother’s arms and cry. But how was I to do that? I was supposed to be a grown woman, a woman with knowledge and strength?

I did not want to look weak. Yet in the real world I had lost the essence of innocence I had arrived with. I felt weak of heart, and I felt the urge to cry. I felt the necessity to be a child again, to come home to my pink bed and book-filled shelves. I missed my childhood adventures of baking cakes in microwaves with my neighbor, of keeping secrets about my grade school crush. Back to when the only disappointment was finding beans inside a Nestle cookie dough container. Where had life gone?

It was impossible to pinpoint the feeling into a single emotion. I wanted the sensation of innocence and childhood. I thought about the people who couldn’t come along with me in my life journey. I thought about my Twilight posters, and favorite butterfly blanket. The sun had set to a dim in the horizon, and I just had to be vulnerable at that moment. I had to be brave enough to show, that perhaps I was an adult or maybe not, but I needed to let my walls down for a moment.

I had to dial the 7 digit number and tell my mother just how much pain heartbreak had caused. In other words, “mom, my heart hurts, how do I make this hurt stop”. I don’t think time was a solution, but rather acknowledging that I had to be weak to be strong. I had to be humble if I wanted to be great. I had to cut the “it’s a Capricorn thing” bullshit and real talk myself.

No one likes to bow their head when you can radiate strength. I could say that was an existential crisis perhaps, while two pairs of glowy eyes watched me give an Oscar-worthy performance of “Rocio’s grief-stricken episode”, but to be honest I think it snapped me out of the narcissistic need to have everything together. The watch maybe broke down because I have been wearing it since I was 9. Maybe, who knows. But it caused a triggering effect where I had to accept humans are but humans.

That if I was to be strong for other people I had to accept that being strong implied being fragile. That if I wanted to bring laughter into people’s lives I had to cry too. I don’t know if fixing the watch will be in the plans anytime soon, perhaps it’s a valuable reminder to stop. To “7:07” myself every once in a while.

On May 18, I sat there for the last time, having breakfast with my friend, the fat raccoon who apparently liked Wheat Thins or maybe it just took advantage of my peace and love moments. It was then, I realized raccoons had an impressive ability to steal food.

I truly cannot really say what it was that struck me. The watch stopped, I watched the dramatic horizon, I cried, I felt weak, but I left the mountain ready to grow while remaining rooted.