How pants are tearing society apart 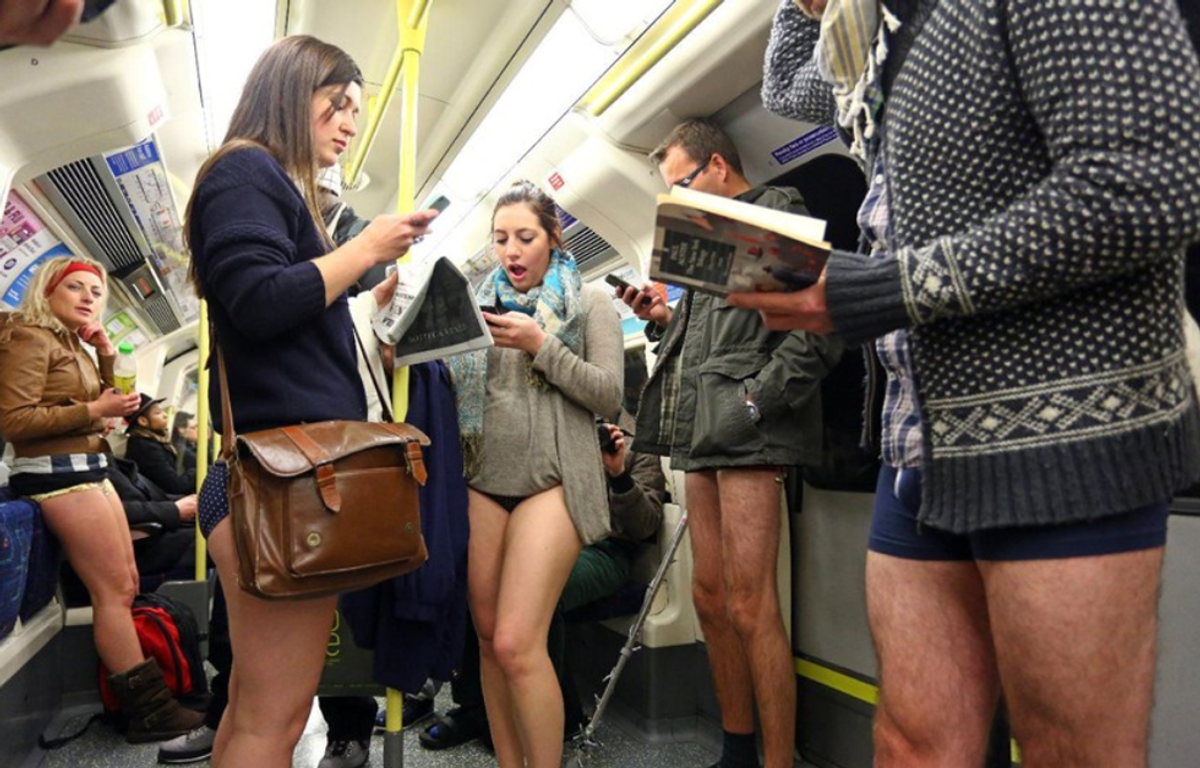 People not wearing pants on the subway

I don’t care if I get strange looks or laughed at when I say it. I genuinely just HATE pants. That doesn’t mean that I don’t wear them, because I certainly do, but I definitely don't enjoy them. Pants are, as one of my good friends would say, “a social construct,” which has been created to divide people. Based on sizes, which are not uniform among manufacturers, people (most often girls) are taught to devalue themselves because they don’t fit into pants as well as another person might. No, I don’t wear skirts or dresses. I don’t walk out of my house pants-less and I don’t believe that people should be forced to either wear or not wear pants. I do however stand by my belief that if there wasn’t such a strong, non-wavering societal pressure to wear pants, people would be more comfortable accepting their own bodies and also those of others.The Mere Exposure Effect is a phenomenon which states that there is a correlation between the amount of one’s of exposure to certain stimuli, and the individual’s favorability of said stimuli. So if a person is more often exposed to their own body, is it not possible that they could begin to gain confidence and admiration for it?

Personally, I try not to look at the size of my pants. As a girl who is constantly uncomfortable with and self-conscious about her body, I have not only refrained from sharing my size with others, but I’m apprehensive to even check my size. I feel uncomfortable going shopping with friends because of this. I'm not remarkably large for a girl of my age and height, but that doesn’t make it any easier to accept the body I have. As a kid, I would complain when my sister got more food than I did, and would then be told never to compare what I have to what someone else has. And while as a child that may seem impossible, it only gets harder with time. Not with food exactly, but with money, bodies, success, relationships, etc.

When it all boils down, size is just a number and pants are just fabric on your body. That number simply determines how much material goes on each of our bodies. There should be no correlation between the number of your pants and the self-worth of the person in the pants. But even then, I would very hypocritically do just about anything to be a size 2, even when I know it’s unrealistic, and probably wouldn’t make me feel any better about myself. The mere fact that female models in commercials and advertisements are a size double zeros or are otherwise considered “plus size” is not only degrading, but also nonviable. Essentially companies make these models the “ideal” image which heightens the insecurities of people who don’t fit these paragons of what a person “is supposed to look like”. But even more ridiculous is our society’s reaction to these misrepresentations and occasional “risky decisions” to attempt to accurately depict society. Accurately representing society’s diversity in size has become something of a “revolutionary” marketing decision. But why? I understand that it is a big deal when a company goes from advertising a size-2 model to a size-10 model, but still, representation in numbers is still too few to celebrate. I will celebrate when I feel that not only the extremes are being celebrated in the modeling and advertising world, but also everything in between.

Recently, I read an article called I Went To A Nude Beach And Hated Every Minute Of It, by Buzzfeed staff member, Loryn Brantz. She speaks about how uncomfortable she felt getting naked on a nude beach at the age of 31 after having overcome an eating disorder and most of her body dysmorphia. She describes her experience of going to a nude beach for the first time and the lack of comfort she felt while trying to embrace her body. Society creates these boundaries of comfort which confine our bodies into clothes and make us feel nerved when we try to or are forced to break free of its restraints. This article illustrates the negative effects which forcing someone to hide behind clothes can have. With a very different perspective on the topic of clothes, Matt Bellassai, former host of Buzzfeed’s Whine About It series, presents us with a comprehensive list of reasons why “Wearing Pants Is The Absolute Worst”. Matt Bellassai sets up a comical exploration of pants and how they essentially ruin his life. While meant to be humorous and comedic, the sentiment and arguments he proposes genuinely bring light to a number of different realities which society has made taboo.

I constantly find myself frustrated by the lack of uniformity which exists in the clothing industry, most notably in the style, size, stretch, and durability of pants. Why does there exist such extreme variation in not only pants from different manufacturers but also among a single manufacturer’s products? I have bought pants in one denim wash that didn’t fit in a different wash (wash being the color/way the pants have been treated) yet had the same number and style written on the inside. I have angrily tried pants on that should have fit perfectly on account of a similar pair of same-name brand pants fitting perfectly. But even when a pair of pants has the same cut, material, size, and style as a different pair, everything is basically up in the air until it is tried on. In a video entitled “Women Try Jeans In One Size, Different Brands”, Buzzfeed’s Candace Lowry and Kristen Chirico address the illegitimacy and lack of uniformity of pants sizes across different brands. They each try on a number of different brand jeans in the same size and debunk the existence of a standard for defining size. Not only is the video informative but the vast majority of comments on the video express a similar distress and frustration in finding jeans.

In public I constantly feel self-conscious about the way my stomach flops over the band of my pants when I'm sitting but not while I'm standing or the way that some pants fit tightly onto my body until I sit down when an enormous gap suddenly appears in between the band of my pants and the small of my back. I have very rarely felt entirely comfortable in a single pair of pants. My sophomore year, as I battled depression, I hid my weight gain behind a pair of big sweatpants and an extra-large sweatshirt. I vowed after overcoming my struggles to never again wear sweatpants out in public. In leggings, I feel self-conscious about how my curves appear. In jeans, nothing ever fits perfectly. In denim shorts, I feel larger than I really am and everything feels like it’s bulging out. In capri shorts, I feel like I'm trying to hide something. In “boys” cargo and basketball shorts I feel comfortable physically, but I become overly anxious that people are judging me for wearing “boy’s clothes”. Any girl who has ever bought a pair of jeans knows how much of a joke girl’s pockets are. They are impractical and genuinely serve no purpose (due to their small size) other than to carry a phone—that is if your phone even fits in your pockets, because mine certainly doesn’t.

Pants genuinely do more harm than good and if society stopped shaming people who don’t believe in the sanctity of wearing pants, I believe people would be able to more easily accept their bodies because “our bodies weren’t designed to be wrapped in leg Tupperware”. As a very wise, intoxicated Matt Bellassai said, “That’s all pants are. They’re just obstacles. Pants are designed to hold you back from achieving all your hopes and dreams.”

Glorie Martinez
4579
Why I Write On Odyssey