Disney veterans collaborate to bring an exciting, magical and heart-warming animated movie anchored by an origin story filled with love 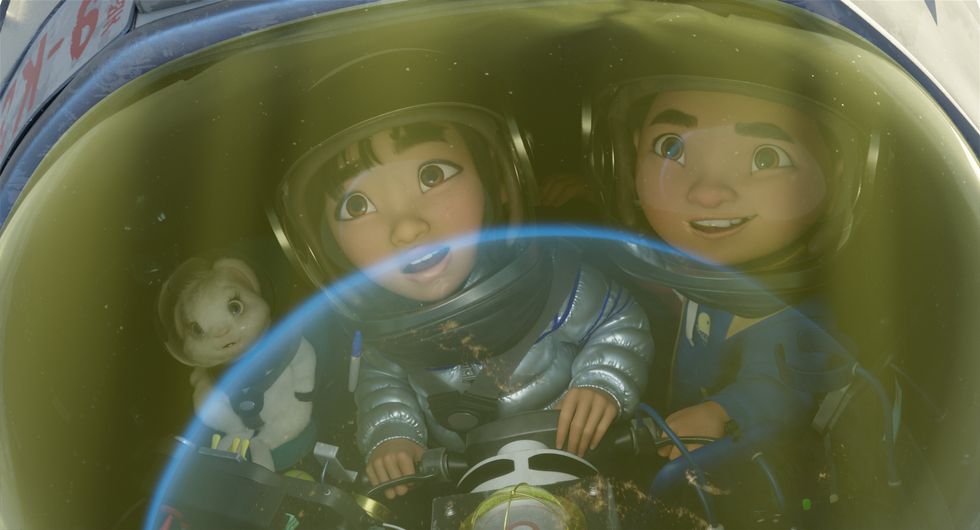 Reading through the film credits, viewers should take note of the incredible cast and crew involved in making "Over The Moon."

So it's no wonder that the musical movie beautifully sends its message about imagination, grief and love to audiences with poise.

Fei Fei (Cathy Ang) is a bright girl with a wild imagination and a passion for science, traits that she shares with her mother (Ruthie Ann Miles) and father (John Cho). She loves celebrating the Autumn Moon Festival and hearing the legend of Chang'e, a Chinese moon goddess who was given immortality at the cost of never seeing her true love again. They are memories she clings to that help her cope with grief after her mother dies. But her beliefs in her childhood tales are challenged when Mrs. Zhong (Sandra Oh) and her son Chin (Robert G. Chiu) enter her family's life.

With her pet rabbit Bungee, Fei Fei sets off on a journey in space to prove Chang'e (Phillipa Soo) is real. Ken Jeong, Margaret Cho and Kimiko Glenn also star in this stellar all-Asian cast.

OVER THE MOON | Official Trailer #1 | A Netflix/Pearl Studio Production www.youtube.com

The animation is extremely mesmerizing. Characters are intricately detailed with 3D animation. But throughout the movie, there's also 2D hand-drawn animation to describe the legend of Chang'e and Houyi's love and to annotate Fei Fei's creative process as she builds her rocket ship. World-building for Fei Fei's hometown feels authentic with details like shades of peeling paint and Luminaria, Chang'e's home, is a bright, astronomical setting that fills viewers with joy.

Writing is another outstanding element to this film. Writer Audrey Wells ("The Hate U Give" and "Under the Tuscan Sun") died from cancer before the film could be released. According to production notes from Netflix, she chose her final projects carefully and wrote "Over The Moon" as a love letter to her husband and daughter. But before knowing the script's origin story, it's clear how deeply the creators connect to themes like grief and wonder through the movie.

More context in the last quarter of the movie would've been nice, specifically learning more about Mrs. Zhong's past and family history. But in this case, maybe the unknown is better left unsaid.

And like all good animated movies, kids will love the goofy nature of these characters and bright colors, but adults will appreciate the hidden melancholy themes. For example, when viewers meet Chang'e's Luminaria citizens, they're cute blobs that exude happiness. But there's a somber origin story to these adorable creatures that may strike a chord.

There's plenty to love about "Over The Moon," from the nine original songs to the loving origin stories, making it one of this year's must-see animated movies.