College may not have been right for you, but I don't think it's fair to diminish the value of the education it provides for many others. 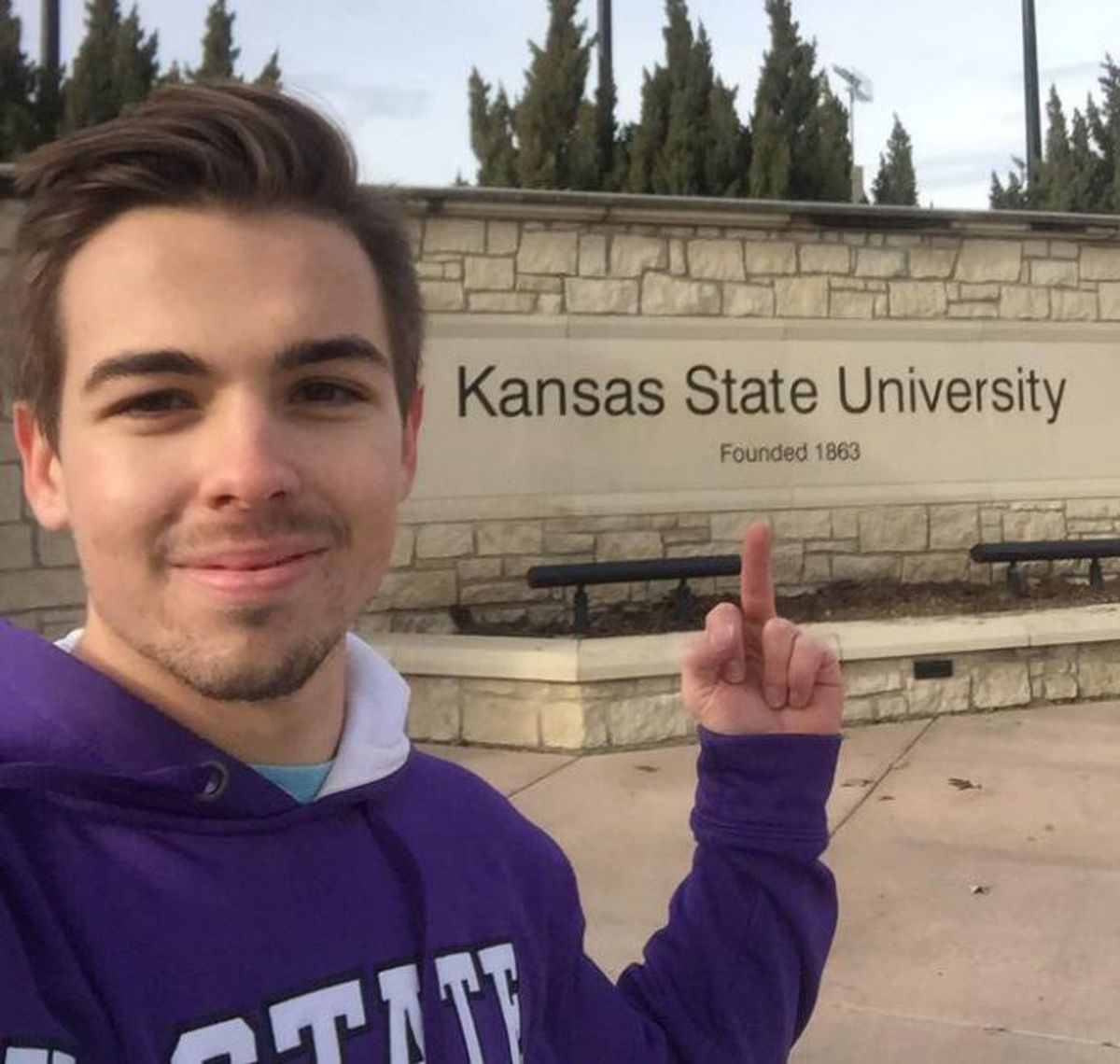 I actually don't think that's a safe thing to say. First amendment rights make it legally safe of course, but I think your implications are harmful to your mindset (as well as to others') of education. State universities are not the right fit for everyone, trade schools aren't always the right fit either, and only engaging in real world experiences don't quite cut it for some of us. However a person chooses to educate themselves after high school is up to them, and I'm not here to judge them for it. I do think it is important to have a positive outlook on education as a whole, however, and to direct your criticisms of the academic world in the right places.

"Colleges are REQUIRING people to spend money taking gen. ed. courses to learn about the quadratic formula (and other shit they will never use) when they could be giving classes on MARRIAGE and HOW TO DO YOUR TAXES," Willson wrote.

Well, as it turns out, K-State does offer classes like those--and thankfully, students have electives they're required to fill with courses of their choosing. There's FSHS 550: The Family; FSHS 660: Marriage Preparation and Enrichment; SOCIO 640: Sociology of the Family; PFP 101: Money 101 (which is offered online at one credit hour, so you can take it on your own time); and 34 other courses beginning with PFP which help people unlock the mysteries of personal finance.

Here is a link to the course catalog search if any K-State student does not already know about it.

In a student's first semester, they are likely focusing on completing their general education requirements: not on taking courses such as marriage and personal finance, although anyone is welcome to enroll in those classes (or their prerequisites) at any time. I am not here to shame you for dropping out after one semester, but I do think having only one semester under your belt does not make you all-knowing.

Furthermore, broadening your knowledge through taking classes that don't necessarily directly relate to your major is not a bad thing. If you go into a class and honestly can tell me you will never use anything you've learned in it again, I think that's your problem. Learning does not always have to entail reciting textbook facts; it can be much more broad. Maybe you've learned through studying eugenics legislature that America isn't always a bright, shining place of opportunity. Maybe you learned the quadratic formula, and even if you don't necessarily use it in your job, one day you are able to help your kid in a math class because of it. Maybe you learned the value of working hard, or how to deal with difficult people. Maybe you learned how to think critically. Reducing learning concepts which don't directly relate to your major to just being "other shit they will never use" is both inaccurate and damaging to the pursuit of intellectual growth.

"I once even had an engineer tell me 'I learned more in my first 30 days working than in my 5 years of college.' What does that tell you about this system?" Willson later asked.

What that tells you about the system is that the college probably did well in training them on the basics. As a result, they held the potential to learn so much, so quickly, on the job. I honestly feel like I learned more in the first 30 days of college than I felt like I learned in my three years of high school. However, that does not mean high school was a waste of my time. It prepared me for long nights of studying and provided a strong foundation so I could focus on broader (but also narrower) concepts in college.

It also means that maybe he or she did not try their hardest to milk every drop of knowledge from their classes. (Who knows? I know I sure didn't always do that in high school.) It could be easy to make it through college with minimal to moderate effort for some people, but that makes it their own fault for feeling as though they wasted their money. Even if you get a 4.0 your first semester, it could feel like you've learned nothing because you did not think you had to work for it. In many cases, I again feel that is the student's fault. If you try in class to learn more than just the basics of what the professor is teaching, visit them from time to time during office hours, do your homework, actually read your textbook and contemplate its broader implications on the world, or maybe start to turn an at-first-glance 'basic paper' into a piece of undergraduate research.... Maybe college will feel more meaningful. Furthermore, then you'll know if college is the right way for you to continue learning. (It's okay if it isn't.)

Like you, this fall was my first semester at K-State. January begins my second semester, and I will be heading in with a 4.0 just like you would have. There were some moments where I questioned if college was really worth it, and those moments were when I tried my hardest to create meaning out of my experiences. I'm not saying college is right for everyone, because that isn't true. College may not have been right for you, but I don't think it's fair to diminish the value of the education it provides for many others.

So, Billy, you're focusing on the wrong things.

Rather than complaining about having to learn too many things, why not focus on the problems that some aspects of college actually have? Why rant about "being put thousands into debt to learn things you will never even use" and "wasting 4 years of your life to be stuck at a paycheck that grows slower than the rate of inflation," when you could talk about the rising costs of tuition, the difficulty for minorities to access quality education, the lack of funding state universities receive, or the student loan interest rates?

That's the time to use your "#FuckInjustice."

Yes, K-State has its problems. Heck, I will have two courses next semester in Eisenhower Hall, where the heating system clanks loudly every three seconds, the windows leak hot or cold air depending on the season, and there's probably enough humidity in the building to curl my papers. However, the problems with university spending, prioritization, the 2025 plan, and budget cuts should not justify bashing the pursuit of a higher education. If you feel as though your education is sub-par and you've done everything you can to fix it, feel free to find another university, community college, online school, trade school, or to set out on an adventure in the real world.

Being 'forced' to become a well-rounded student is not the problem.

However, I see you've started your own company, so a future employer, business partner, or customer looking back on your Facebook posts might be.

Wishing you the best of luck,
Lynsey Akin

Emmaline B
The Narrative
72984
https://unsplash.com/photos/O0T1SIgHAfM