One Night At The Steeze
Odyssey

One Night At The Steeze

It's time for a pizza run. 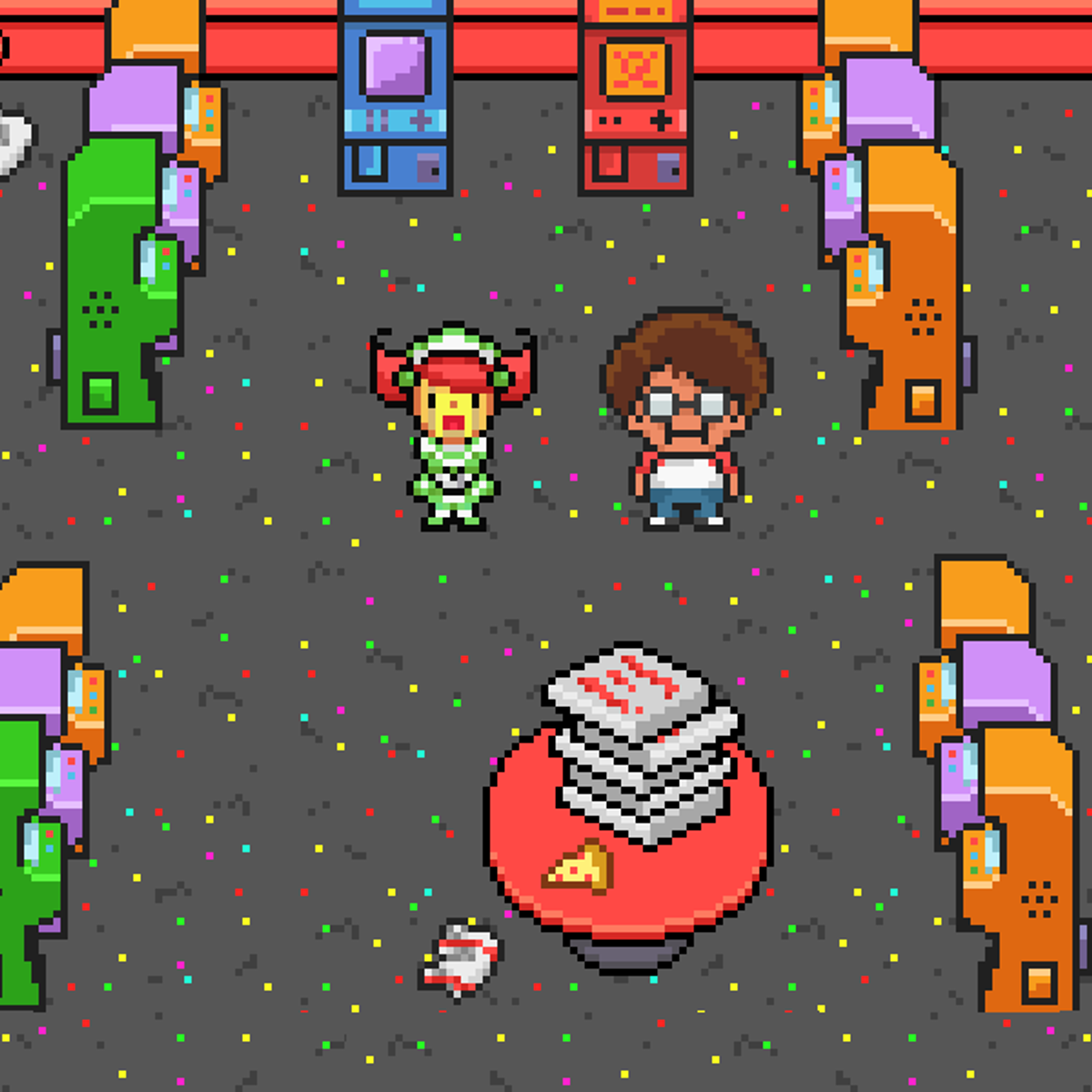 You’ve heard of Five Nights at Freddy’s, now get ready for One Night at The Steeze. However, despite what the title would lead you to believe, it’s not a fan game. Rather, it was inspired by the concept of a spooky pizzeria. Instead of going with a gritty, horrific tone, One Night at The Steeze is filled with childlike goofiness, with some horror peppered in.

It’s Saturday night, some time in the 80s… and it’s time for a pizza run. That’s the only story you are given before you begin playing, welcomed to the entrance of a pizzeria with an 8-bit rendition of Somebody To Love by Queen. It’s hard to judge the story, since there really isn’t one until the very end. You’re given no context for why you’re there, or what you’re supposed to do. There are only two other people in the pizzeria, and the most they reveal is that it’s an hour until closing, and that you should keep your cats away from the establishment.

It’s easy to give a low score to the story for barely existing, but then that begs the question: what if there was a lot of story? Most fans of Five Nights at Freddy’s can tell you that the game holds a ridiculously convoluted plot, but it’s also a series with over four main titles, a book, and allegedly a future movie. One Night at The Steeze is supposed to be just one night. In fact, only one hour. So a lack of a plot suits the gameplay. The Steeze is more about what you’ve found, than why you’ve found it.

I will, however, dock points because of the ending. The game tries to throw you for a twist, but instead just feels very rushed and forced (and makes it very awkward when you re-enter a save file).

Right off the bat, this game’s visuals exude an aura of Earthbound/Mother 3. Which makes sense, since the creator states the graphics were based on them on the game’s profile. The art style isn’t incredibly detailed, but each asset portrays the right amount of information to the player that it needs to. The pizzeria is very decorated, with tables, plaques, arcade cabinets, mysterious green stains, you know the usual. This makes the tilesets not feel too repetitious, even if they are.

And I have to say, the chubby little blank stare of our protagonist is absolutely hilarious. From his squishy walk cycle to his puffy hair he just exists in a state of adolescent awkwardness that we can all relate to. Coupled with such bright and diverse environments, I can’t help but smile.

You can’t go wrong with Queen. The description for the game calls back to the nostalgia of visiting pizzerias as a child, and music straight out of the 70's remade in 8-bit synth pushes The Steeze’s retro factor to another level.

On the other hand, a major strength of this game is its silence. There are multiple parts of the pizzeria, such as the vents or ball pit, that are dead silent. The moment I entered a back room and the music cut out, I felt a chill up my spine. There was nothing spooky about the room itself, aside from a poster saying “EAT!” that paid homage to Mr. Fredbear himself. But there’s a reason why “it’s quiet, too quiet” is such a common trope. Sometimes silence speaks the loudest.

Beginning out in the front of the pizzeria with little to do, I went around clicking on garbage on the ground. To my surprise, collecting garbage is a gameplay element. Trash bins in the game can level you up, or give you fireworks to use as a weapon. I have never before been so jazzed up to pick garbage. However, the battling isn’t too fun, even with fireworks. Your enemies have an unbelievable amount of health, considering the bulk of them are balloons. Battling isn’t necessarily hard, it’s just tedious and not engaging.

It is made better though with the multitudinous pizza boxes left stacked upon the tables. They fully heal you, and can be visited at any time. It leaves a lot of wiggle room in the difficulty, which I’m all for in a game that’s mostly about exploration. There is violence outside of the battles too though, in the way that a key mechanic is punching things—like wet floor signs and metal grates. This does beg the question, though, how can a young boy shatter a hunk of hard plastic in one blow, but take a good three or four shots to deflate a balloon? But I suppose a world that has possessed hand puppets out to eat you shouldn’t be searched for logic.

The Steeze effectively captures childhood nostalgia and creepiness together in one tight package. When I’m not swaying along to the music, I’m tensed up to the neck with fear. The game’s creepy factor has a natural progression, not throwing it all in your face at once. I won’t say any more on the topic though, since I feel it really is a game to go into knowing as little as possible about what scary things that await you. It’s not that these things are so magnificent or mind-blowing, but the contrast of the creepy against the quirky makes the surprise all the better. While in many other horror-tinged games, I can see what’s coming, I was really caught off guard by what I saw in here.

This game has a good balance of scary and funny. You (probably) won’t be jumping out of your seat with fear or laughter, however it’s still a great experience to spend one night at The Steeze.