I'm Just A Girl, Standing In Front Of A Fibromyalgia Diagnosis, Asking For It To Get Better

How I'm learning to cope with my chronic pain at a young age. 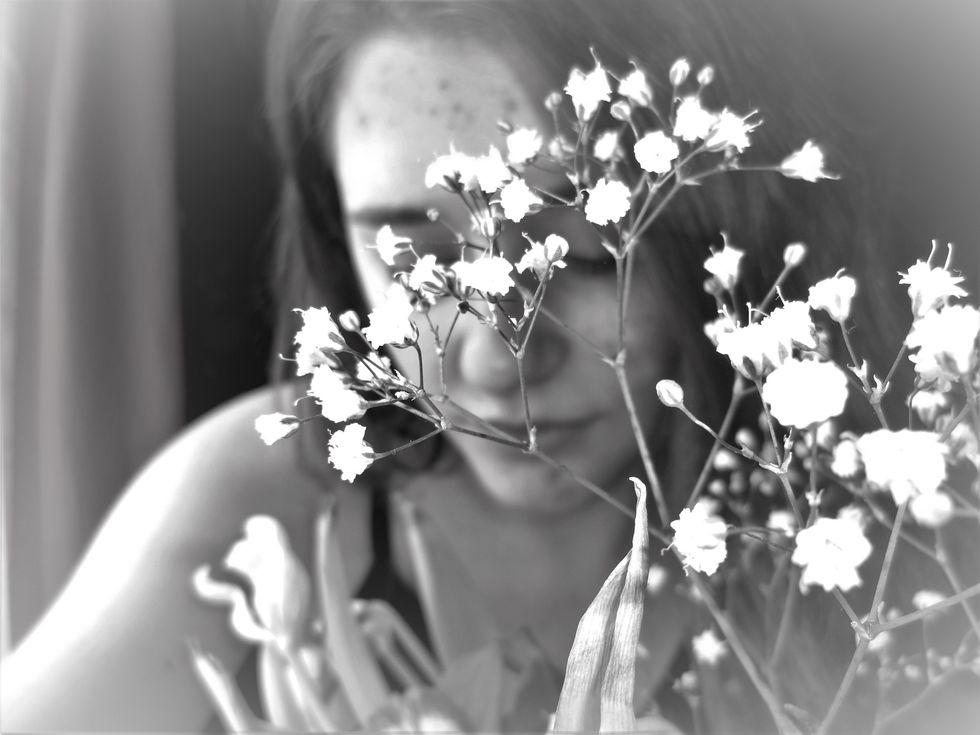 I was diagnosed with Fibromyalgia a few years ago, after having recurring bouts of back pain for my whole life. It never really seemed like a big thing. Or at least, I don't remember it affecting me too much.

I stopped doing P.E. the year before my "big flare," as I found it painful to move my arms in repetitive actions and running could strike up immense pain. Soon after that, I started getting a lift to school every day since carrying heavy bags was, again, causing pain. Despite the nights of extreme pain after not pacing myself enough, I was coping as best as I could. To be honest, I think my GCSE stress acne felt like more of a problem to me at a time.

I think my stable friend group helped me a lot, but they didn't know I had FM. I can't remember what I said to them when I said I couldn't do P.E. anymore, probably just that "I get backache sometimes." I remember a girl I was friends with said to another friend of mine, "her mum probably writes her a note for P.E. because she doesn't like it. LOL" and every time I entered the library instead of P.E., the librarian asked, "what was wrong with you then?" I just told her I don't do P.E. and "where do you want me to sit?"

Things like that made me feel embarrassed and somewhat ashamed.

Fast forward to last year when I met new friends and disconnected with a few old ones, started the sixth form and started dating my current boyfriend — I mention these things as they could be a contributor, but who knows? A month or so into our relationship, my pain began to get worse: I remember being sat on his balcony, him holding my hair, and being in so much pain that I felt like I needed to vomit. From there, I started to develop more and more symptoms.

Unlike a lot of other chronic pain sufferers that I've spoken to, I personally find any heat unbearable. A lot of people with chronic pain find cold weather causes their joints to stiffen and an increase in pain, but for me, the catalyst to my flare was the heat. It caused me migraines and extreme pain, that ruined my holiday and kept me in bed for most of the summer.

Once my pain began to spiral, it seemed that it didn't even need specific stimuli to set it off anymore (heavy lifting, exercise, food or heat), which made school very difficult. I barely ever made it through the whole week — it was usually about eight hours a week around that time. What made it more of a struggle was the lack of understanding and means to cope with my condition from my school: my teachers weren't giving me any slack on homework (which I wasn't even in school for when it was set), I was regularly asked why I was off school and they threatened to give me detention when I didn't bring my whole folder in (which was too heavy for me).

Time after time we had to remind the school and teachers that my condition has its restrictions — that I'm doing my best.

After a mixture of medications and more stability in my life, I slowly began to improve. I went through all the stages of grief. Every time summer rolls around, I still fear I'll get bad again, but I'm trying to move on. My brain is not the same as it was before my health got bad and brain fog has left everything I've tried to learn during this flare as soggy remains. I feel far more dazed than I used to be, making it harder to focus. Interestingly, it makes me more philosophical, which is fun (or weird, if you ask my boyfriend).

Soon I'll be finished with school, probably with lower grades than I would have had and liked, and I'll hopefully be able to manage my pain and stress more efficiently. I'm afraid the change will cause another flare. I'm afraid of the hot weather coming back again, which usually would make me excited. But I got through it once and I believe I can do it again. As said by C.S. Lewis, "You can't go back and change the beginning but you can start where you are and change the ending."

In the worst times, I didn't think I could get through my life in that amount of pain, but I have, I can and I will. I believe I can get by with a little help from my friends (and myself, some medication and some therapy, of course).

13 Tips To Help You Keep A 4.0 And Your Sanity In The Middle Of A Pandemic