O'Malley Who? The Unknown Candidate
Odyssey

O'Malley Who? The Unknown Candidate

An inside look at the Democratic presidential candidate Martin O'Malley. 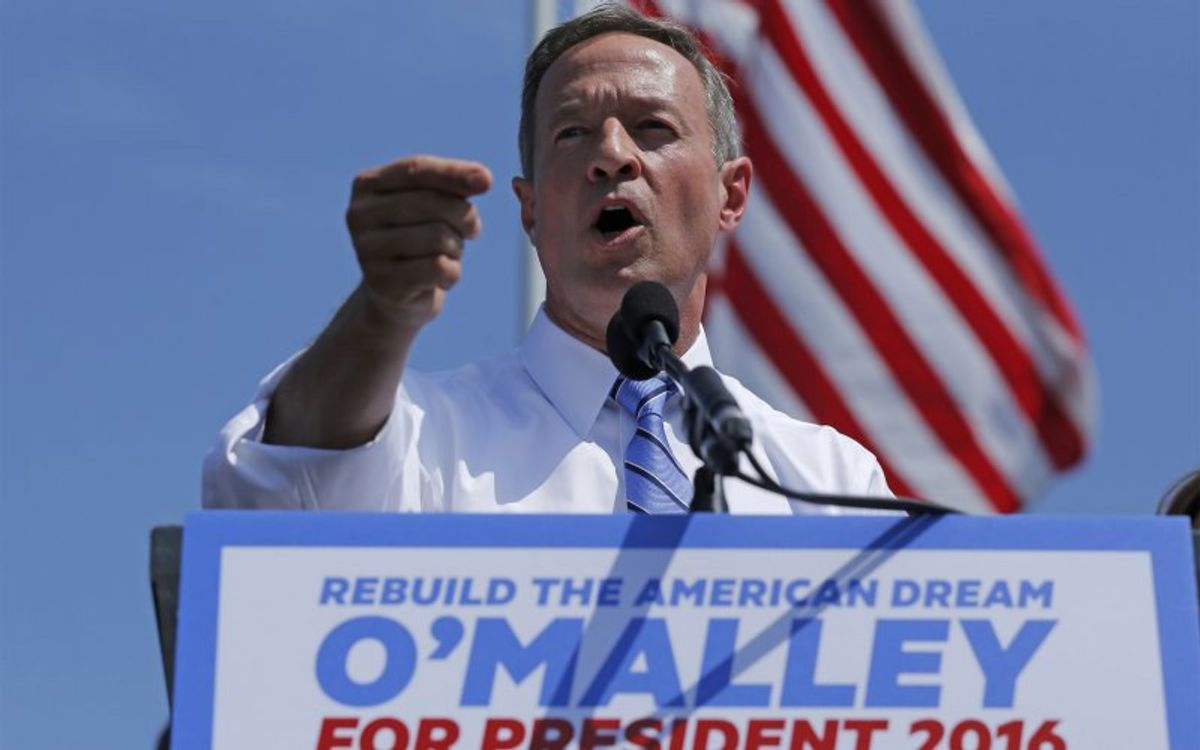 Two weeks ago in Las Vegas, Nevada, America witnessed their first Democratic debate for this primary election season. Many were eager to see Clinton and Sanders duel it out but were left scratching their heads at the other candidates. The two lowest pollers of the field, Jim Webb of Virginia and Lincoln Chafee of Rhode Island, have since dropped out of the Democratic race.

And then these three candidates were left. College students will recognize Hillary Clinton and Bernie Sanders, who represent two very different sides of the Democratic Party. But who’s on the right? The tall mysterious man is Martin O’Malley of Maryland. Most students, and even adults, I have polled, replied with questions like “Who?” when asked if they know who Martin O’Malley is. Out of all the students polled, only half recognized the candidate’s name.

Who is this guy? Martin O’Malley is a Democratic presidential candidate who has formerly served as the governor of Maryland for two terms following an eight-year run as Baltimore mayor. Many know him as the third wheel of the Democratic primaries. In this article we will dig deeper into the life of the Unknown Candidate.

Martin O'Malley is very open with his political career on his website where I found all of the information for this article.

To better understand O’Malley, it is crucial to know him on a more personal level than is currently being displayed in the media. Other candidates who have received more media attention have openly talked about their lives. Hillary Clinton has a major advantage with this, seeing as eight years of her personal life was in the spotlight during her time as first lady of the United States.

O’Malley, like most male politicians in America, is married with a family. He met his wife, Katie Curran, at law school in 1986. They were married in 1990 and have since had four children.

A considerable aspect of O’Malley’s life that is not commonplace in a presidential candidate is religion. O’Malley is a Roman Catholic who attended Catholic high school and university. If elected, O’Malley would become only the second president who follows Catholicism, the first being John F. Kennedy.

An appropriate fact in examining the candidate's personal life is that he fronts an American Celtic rock band in his home of Baltimore. O’Malley’s March was founded by Martin himself in 1988, and still plays today.

After graduating from high school, O’Malley stayed local to D.C., attending the Catholic University of America. The presidential candidate then moved on to Maryland where he attended law school.

It was at the University of Maryland School of Law where O’Malley began working on a presidential campaign for Gary Hart in the early '80s. Not surprisingly, O’Malley would perform his music at small campaign fundraisers.

In the same year O’Malley formed his band, he graduated from law school and subsequently passed the Bar Exam. The following years were immense ones for the newly graduated lawyer.

From 1988 to 1990, O’Malley worked for the city of Baltimore as the assistant state attorney. He carried on his government work for Baltimore when he was elected on to City Council for two terms.

Apparently, Baltimore loved him so much that he was quickly elected the city’s mayor in 1999. On O’Malley’s website he claims that “at the time, it was the most violent, abandoned, and addicted city in America.” This campaign marked the beginning of O’Malley’s focus on reducing violence in Baltimore and beyond. The candidate won the mayoral election with 90 percent of the votes — a monstrous victory. During his terms, O’Malley asserts on his website that he “promoted important investments in the local economy — bringing fiscal stability to schools and cracking down on crime, which drew investments and people back to the city”. The Mayor’s victorious term can be summed up in Time Magazine when he was named one of the Top 5 Mayors in the U.S.

In 2007, Martin O’Malley was sworn in as governor of Maryland. During his two terms as governor, O’Malley had a lot of large scale accomplishments. O’Malley’s presidential campaign website lays out his achievements, beginning with his accomplishment of Maryland gaining back 100 percent of the jobs lost during America’s recession. His first campaign was full of progressive agendas such as passing renewable energy legislation.

In 2010, O’Malley announced his intention to run for reelection. Ironically, Hillary Clinton, who he would eventually run against in the presidential primaries, praised him in a private email saying, “he should be reelected by acclamation for steering the ship of state so well.”

In his second term he championed same-sex marriage legislation, college tuition price dropped, he repealed the death penalty, and passed the Firearm Safety Act of 2013. His tenure as a governor reflects his identity as a progressive candidate.

The “Rock ‘n’ Roll Governor” made a surprise appearance at the most recent GOP debate. O’Malley spoke outside the debate discussing his favorite topic: gun control. He called for immediate action to further gun control. He gathered with the families of mass shooting victims.

This Friday, Nov. 6, O’Malley will face off with Clinton and Sanders in Rock Hill, South Carolina. Rachel Maddow will moderate the highly anticipated event.