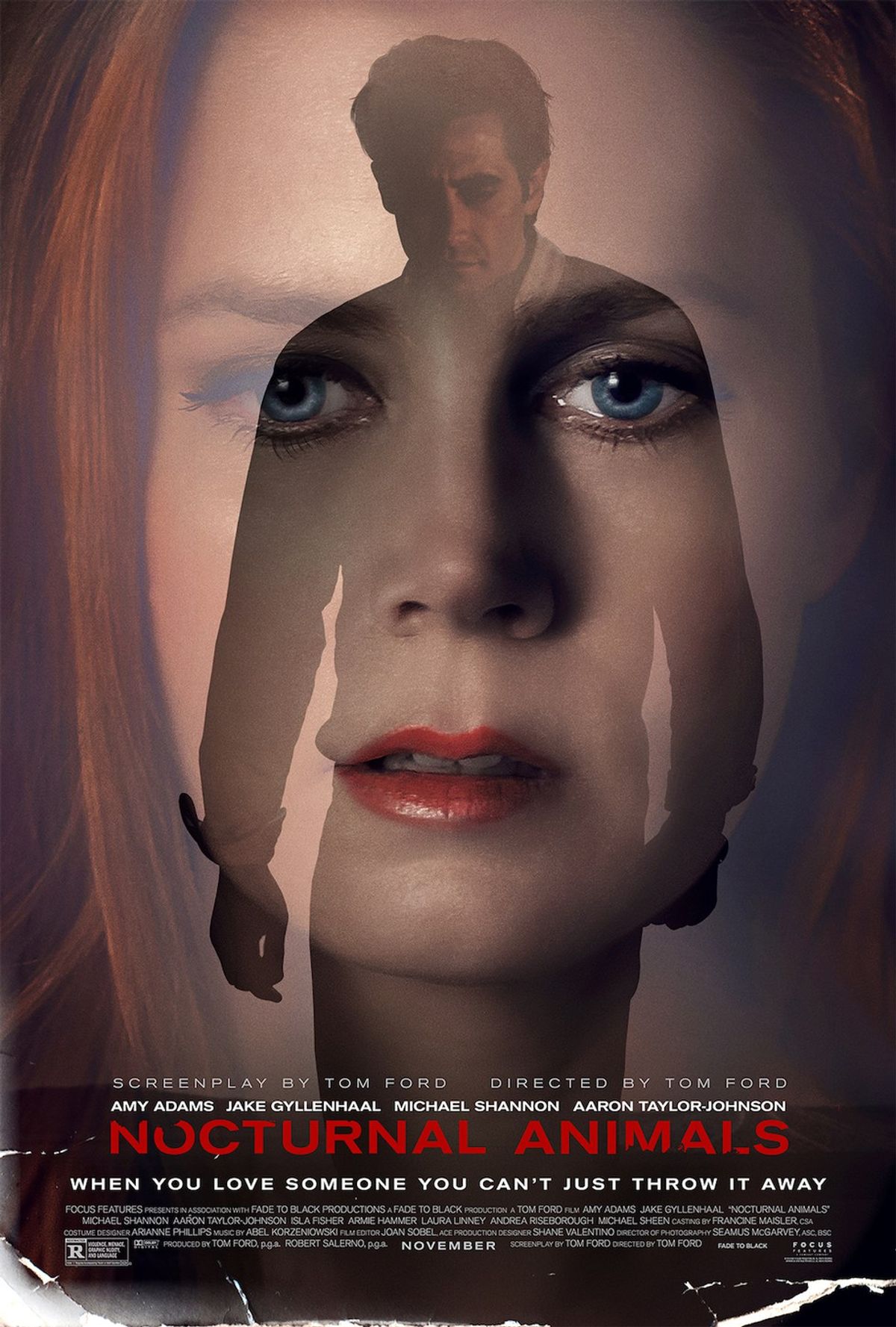 Written and directed by Tom Ford

Tom Ford, most famous for his work as a fashion designer and his self-titled label, is a curiously inventive director. Having proved himself with the exceptional A Single Man in 2008 with Colin Firth and Julianne Moore, Ford has now crafted his second motion picture in 9 years. So here we have Nocturnal Animals, an original thriller of malicious and sensuous undertones.

The film stars Amy Adams as Susan Morrow, an art gallery owner who has just received a transcript of an upcoming thriller novel from his ex-husband, Edward Sheffield (Jake Gyllenhaal), named “Nocturnal Animals”. Susan is now in the midst of a rocky marriage with an unfaithful businessman, Hutton Morrow (Armie Hammer), so Edward and his manuscript have acquired Susan’s curiosities (the film then cuts to a different scenario, which is the “novel” Susan is reading. In other words, Nocturnal Animals shows a story within the film’s main plotline of Susan, and that story is the manuscript she received from Edward). The novel follows a horrific night for Tony Hastings (also played by Gyllenhaal) and his wife, Laura (Isla Fisher) and daughter, India (Ellie Bamber). As they drive one night through the desert highways of West Texas, the family is terrorized by three local weirdoes led by Ray Marcus (a creepy Aaron-Taylor Johnson), which proceed to kidnap India and Laura while a powerless Tony watches. Later on, Tony is helped by detective Bobby Andes (Michael Shannon in another magnificent performance) to track down the three hoodlums. As she begins to read the story of the Hastings’ family, Susan becomes intrigued with the novel’s dark and emotional themes, which she finds strangely familiar from her previous marriage to Edward.

If you had any trouble trying to make sense of this film’s plot and storyline, that’s because it is meant to be. However, Ford and the film’s editors start off to a rocky beginning overall (the unusual opening credits will probably alienate or repel some viewers) as there is some confusion in making sense of what is real life and what is fictional (from the manuscript Susan reads). Another baffling element is the casting of Jake Gyllenhaal as two characters in the real life and in the manuscript from Edward. At first, we wonder why is Susan’s ex-husband in the story of Tony Hastings’s family and their horrifying ordeal. My take is that this casting was done to show how there is an emotional connection between Edward (Susan’s ex-husband) and Edward’s character in his manuscript (Tony Hastings). People may write certain characters based on themselves, and this must have been the point.

Despite a lackluster beginning, the film itself starts making sense slowly as we have established which person is which and what scenes pertain to what storyline (either real life or Edward’s manuscript). Also, there are many elements that establish the film’s genre as a creepy yet seductive and capturing thriller. The look of the film is exquisitely shot, bringing lush colors and vivid scenery that echoes sexual thrillers such as Paul Verhoeven’s Basic Instinct (the director who crafted last year’s erotic thriller, Elle) or the stylistic thrillers from filmmaker Brian De Palma such as Dressed to Kill and Blow Out. The score, by Abel Korzeniowski, gives off the right tone of uncertainty and sleaziness (although a little too similar to composer Bernard Herrman’s scores) that are comparable to these flawed characters such as the unfaithful yet astute Susan or the good-hearted yet ominous detective Bobby Andes. As for the performances, everyone in the cast shows effort in their work, especially the underrated Michael Shannon, who gives yet another career-high performance. Shannon, nominated for an Oscar for his role, is exceptional at showing an experienced man of the law with nothing left to lose.

Overall, Nocturnal Animals accomplishes what it sets out to be, which is a thriller with a twisty tale of murder and fiction. Sometimes it doesn’t work, but for the most part, it’s a satisfying film that contains many things worthy of being admired. Proceed with caution, as this is a violent and grim film. For those who crave an intriguing and stylish neo-noir thriller, it delivers. I am eager to find out what director/writer Ford has to offer next in the near future.