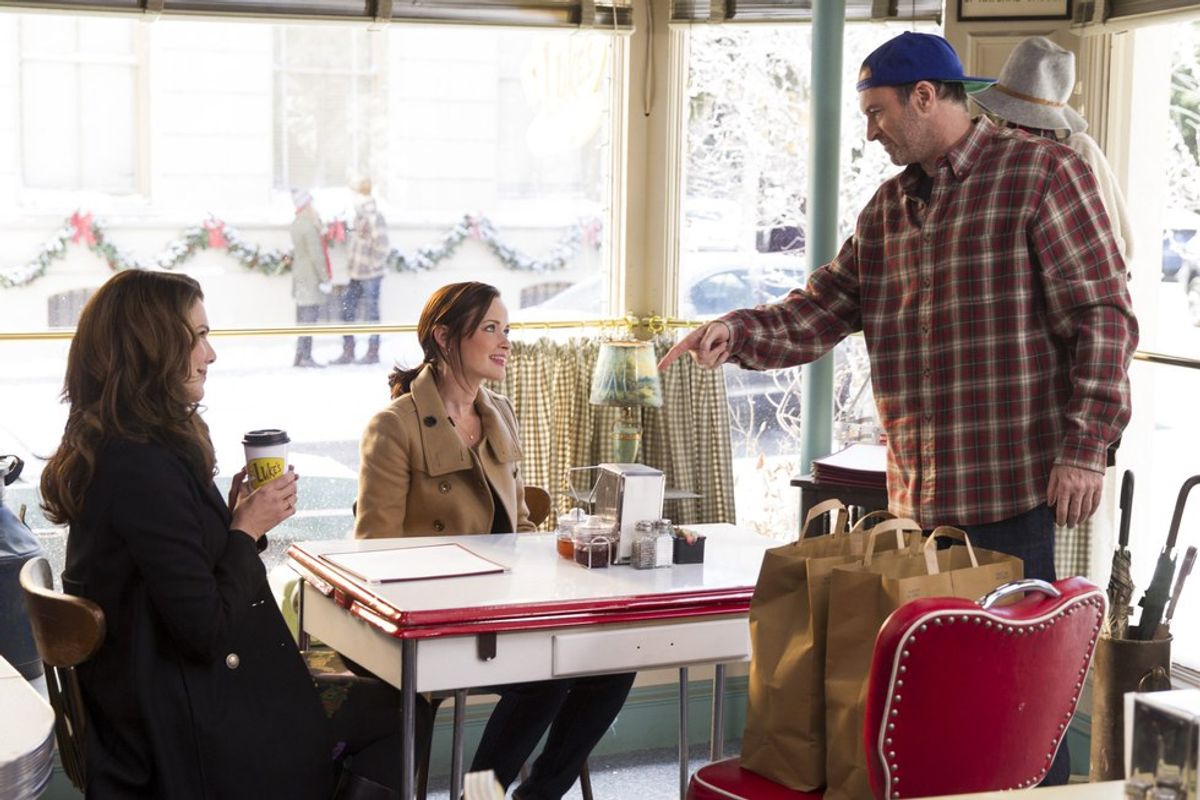 I have no idea how to fully express my love for the early 2000’s TV hit Gilmore Girls. I first learned about the speedy-speaking mother-daughter duo in middle-school (a la abc Family reruns) and have since become a loyal fan. While the show itself may be somewhat idealized-okay, very idealized- it still attracts a wide audience. Who doesn’t want to watch a show about a hilarious single mom and her brilliant daughter? Add in a crotchety diner-owner who has a thing against the lovably annoying town grocer, a retired New York showgirl-turned-dance teacher, and a pair of clueless, affluent grandparents who love their daughter and granddaughter, and you’ve got a hit. It’s a quirky, but heartwarming series, one that satisfies and leaves you wanting more.

Speaking of crotchety diner-owners (or, rather, the aforesaid crotchety diner-owner), for those of you who have not been introduced to the amazing Luke of Luke's Diner, please, let me do the honors. Featured prominently in the series is a flannel-wearing, five o' clock shadowed gentleman who runs and owns the Gilmore girls' favorite eating spot. He is sarcastic, a little anti-social, is pretty much Lorelai's best friend (besides Sookie, of course) and, at one point, boyfriend. He also provides comic relief during episodes where he and Taylor, the town grocer, meet.

I can already feel fellow fans rolling their eyes: yeah, yeah, yeah, we know, Luke's great, so what? Well, what if you could actually go to Luke's for a day? What if that hardware store/diner really existed? Well, whether you believe it or not, the fictional coffee shop has been brought into the real world, folks, and while I myself was unable to visit the famous diner, many others were. Celebrating the show’s 16th anniversary, pop-up Luke’s Diners were sprouting in local coffeeshops around the country, 200, in fact, according to ABC News. Coffee shop employees donned Luke’s Diner aprons, patrons drank out of Luke’s Diner paper coffee cups, and there was even a cut-out cardboard Luke watching the entire scene unfold. Oh, and did I mention the coffee was free? That’s right, free coffee. Imagine, you could be Lorelai for a day, sideling up to the counter, grabbing your morning pick-me-up, and never even so much as dropping a dime into the barrister’s hands. Pure perfection.

Although it may seem like I'm turning a bit delusional, I love it when fictional places are taken out of their made-up settings and put, for a short time, into our wonderful little dimension. There are some who may cringe at the thought of pop-up Lukes' and replicated Dragonfly Inns (is there one?), but I'm one of those strange supporters of the temporary TV show attraction. For frenzied and closeted fans alike, replicated fictional landmarks become fun and exciting real-world connections to the places we'd like to visit, but never can. They provide a short escape from everyday life, and while I'm sure a plethora of audience members would love to live in Stars Hollow, there are those of us who are content to stay in our less-than-perfect homes, but would still love a taste of the Gilmore Girls' life. Are such stunts for promotional purposes solely? Probably, but hey, who cares? Already being a loyal viewer means such promotional tactics won't work (you're already planning on watching the new season, duh), and for those who have no idea what the heck is going on, it's a quick adventure into a new world.

While it seems the pop-up phenomenon has ended, lasting only for that too brief period of time, fans can still get excited about the show’s comeback next month. Featuring a much older Lorelai and Rory, it appears that the original cast has been preserved as much as possible, so that the ‘true’ Gilmore Girls experience is maintained. Of course, with changing ages come changing times, and a lot has certainly shifted since the early 2000’s. The Gilmores will be entering an age of smartphones, overpriced coffee beverages, and hipsters.which all makes great fodder for their witty sarcasm.