9 Klingon Phrases You Have To Know

9 Klingon Phrases You Have To Know 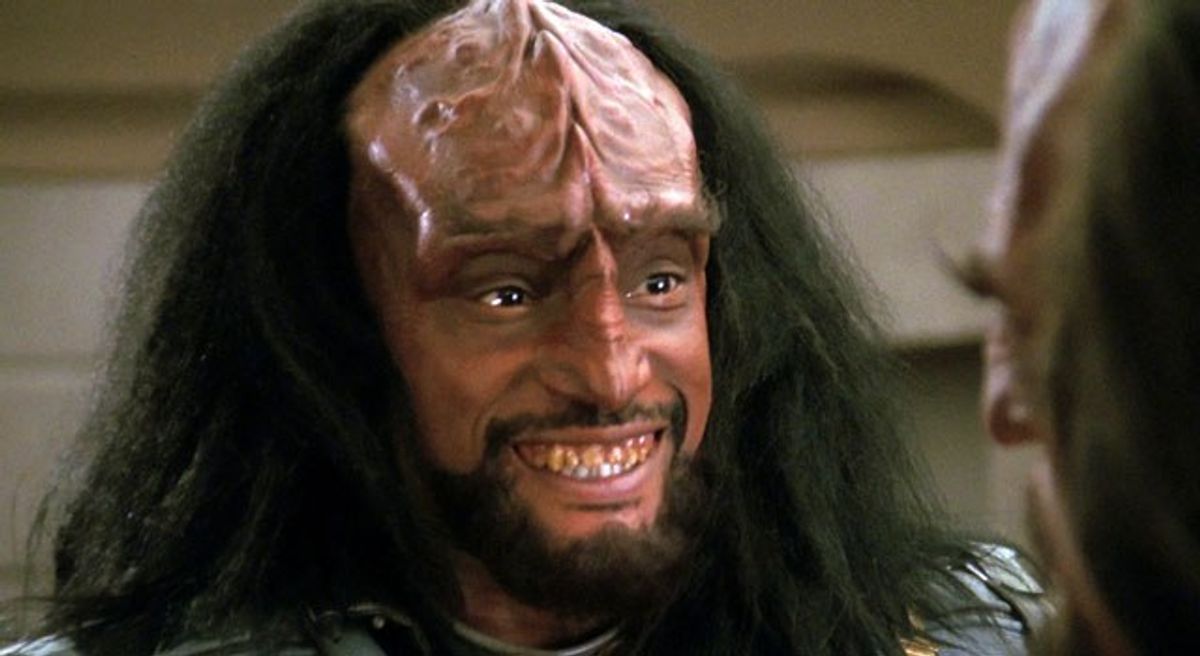 Do I speak Klingon? No. (Or, ghobe'.) Should I? Defs. Just with any language, there are some truly glorious phrases that are very useful, and so in my learning, I'll share them with you. Klingon's like German -- sounds aggressive no matter what you're saying. Unlike German, it really is.

This is the Klingon expression of neutrality or indifference in the face of questions or other statements. Like, "How did you feel about that battle where we smashed in the heads of those humans?" "Eh, my hovercraft is full of eels." Except both of those sound way cooler in Klingon.

Chocolate is, for Klingons, a very important part of their culture. It's like catnip, but for battle and swearing. Asking this question basically means that you're about to warm-up for some good ol' bat'leth swinging and raging. Fun times, amiright?

It's a basic good-luck blessing, as you can tell by Worf's delighted face here. Klingons love that sort of stuff. Pain and gore and stuff, they dig that so much. Tell this to every Klingon and Klingon-speaker you know. Say this as much as a vegan says they're vegan. Just always.

This is pretty self-explanatory. Klingons like to fight and kill and stab things, and this phrase is the basic greeting. If you don't say it, you're impolite and 'so repulsive.'

This is super deep and a Klingon proverb guaranteed to impress whoever hears it. Especially if you can pronounce it. However, it is also a challenge to the Klingon warriors around you, boasting your own prowess and opening up yourself to be killed by a "running man" -- because if you kill him, then you're just bomb. If he kills you, then you're just one of four thousand. Listen, it's another species. Nobody said they had to make the same sense as humans.

Klingons love to yell. These ones above are yelling because it's a really bad pun in Klingon that makes everyone groan. It's old hat and over used, but it does offer a good insight into the culture, so it's good to know. Also, it reminds me of my roommate's theory of Vulcans and their propensity to mind-meld with the dying (specifically Spock, but that's irrelevant) alongside their link of seeming-abstinence for about seven years. She's implying something there.

You've probably heard it before, but this is a great insult in Klingon. It's a really good way to start a fight, so if you're aiming to be really Klingon, use it a ton. It can also, in some situations, be used as a pick-up line, but you have to have good discretion to tell which is which.

Yeah, no Klingons really use this. But you, as a human learning Klingon, might find it useful, especially if your friends take your lead and start learning Klingon too, or you want to be sarcastic. Klingons have no understanding of sarcasm, so this is a great phrase to definitely never use with them unless you want to confuse the poor souls.

If after all this, you're like qu'StaH nuq? (perhaps because you've actually seen Star Trek, or you do really speak Klingon) and want further explanation, I will only say: Qo'. It's a Dup. Don't get na'.