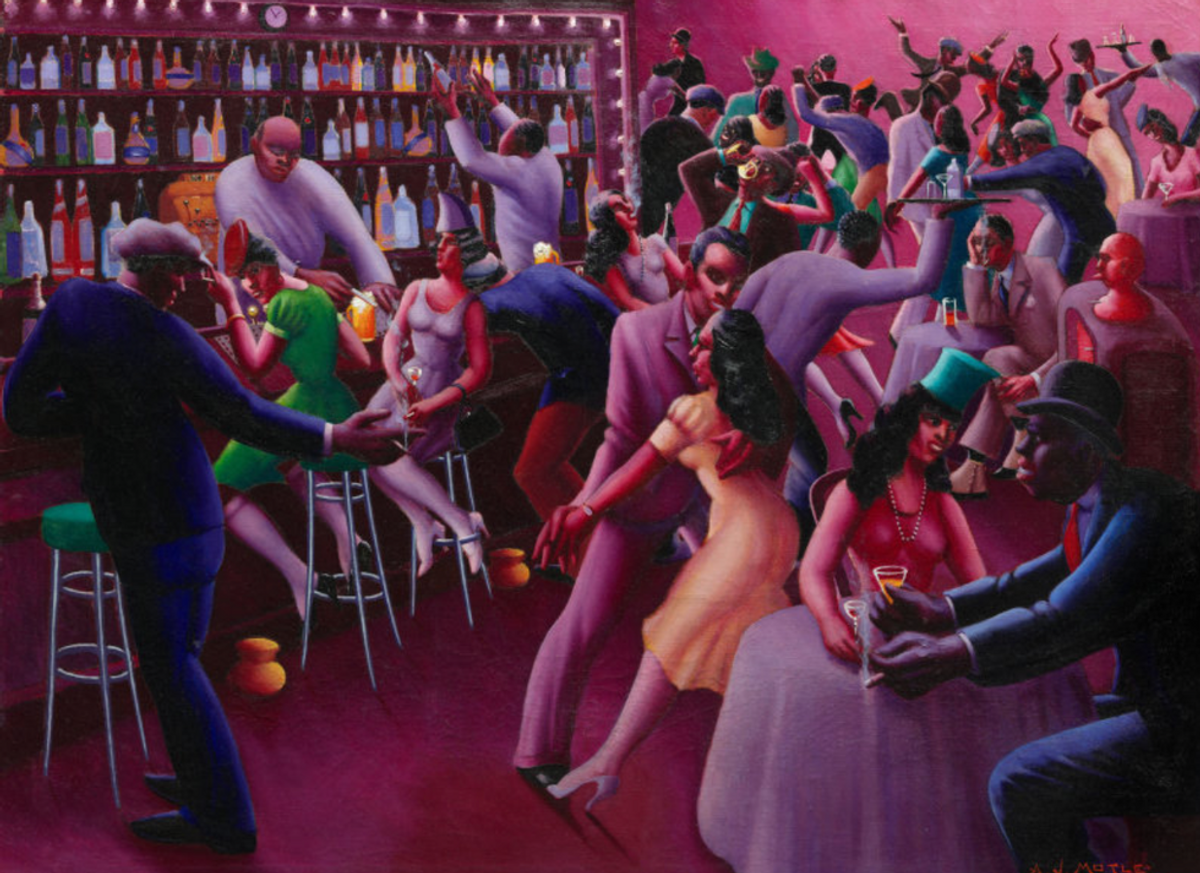 American artist, Archibald John Motley Jr.’s oil on canvas painting, Nightlife shows the scene of African Americans at a nightclub in Bronzeville, a South Side neighborhood in Chicago (Museum Label). People crowd the scene with dancing, socializing, and drinking. This piece was made in 1943 and now is located at The Art Institute of Chicago. In Nightlife, Motley uses contour lines, color and hue, cultural context and diagonal composition to show the social interaction in the nightclub.

The left of the painting shows two bartenders at work, one stocking the shelf of bottles and the other making a drink. Three green bar stools are visible, and the bar is slightly less crowded compared to the rest of the image. A woman in a bright green dress stands out at the second seat. In front of her, a man dances with his hand gestured out and creates eye contact back at her. Behind her, a woman seated in lavender stares off while holding a cocktail, a man sits passed out, and a sitting woman watches a man drink. The frontal middle of the image is relatively blank, while as going back more people crowd the floor. A lady in an orange dress dances formally with a man. Behind them a worker shuffles through the crowd with his serving tray. Multiple couples with limited detail fill the back of the image with dancing. At the far front right of the work, a man in a dark suit, and a woman wearing a lavender dress and green hat have a conversation with a cocktail. A man sits a alone at a table next to the juke box, while the interactions of men and women surround him. Motley put an emphasis on social interaction by expressing it though gestures and glances (Museum Label). The interactions between men and women is noticeable and the ones who stand alone or work alone pop out.

Limited detail is shown because it focuses more on his view of the scene as a whole rather than on the individuals characteristics. The detail that is shown relates to the scene. As the clock above the bottles strike one, people are still avidly dancing and enjoying themselves. The bottles are simple with many multiples, but represent the drinking scene. Choice of clothing and the music blasting from the jukebox depicts the time period that Motley was trying to create, along with a peanut dispenser that is placed on top of the juke box.

Motley creates a lively tone through the use of a burgundy hue which adds a rich and vibrant atmosphere for the club-goers. The music’s rhythm can be felt throughout the paintings bodily figures. The paintings polychromatic form adds to the paintings nightlife feel. The wide range of color also makes the artwork more pleasing to the eye. By hi-lighting the frontal figures in the painting with the use of secondary colors green and orange, it reflects against the hue and makes them pop. Two dark men are placed in the bottom left and right corner and adds to the foreshortening of the figures placed in the background.

Movement and motion of the figures in their sitting or standing motion is most visible to this piece. Motley created motion and depth by his use on contour lines on the men and woman clothing. Ladies dresses flow with the movement of their bodies, while men’s jackets and shirts wrinkle or crease with their turns and motions. The serves rush through the crowd can be seen with foreshortening. Figures in the front tend to be much larger, while going back in the diagonal composition figures get smaller and less detailed. The composition of work puts a focus on three areas of the painting. three different couples are placed in the foreground and the rest of the crowd plays her part in creating a scene. Implied lines are seen with many of the figures. The people who stand out most, seem to be creating eye contact with either another person, or thing. It not only brings focus to another part of the painting, but it is key in creating the lively intimate atmosphere in Nightlife.

Having his own struggles with racial identity, Motley identifies the figures in his piece by using different skin tones to represent individuality of each African American. A unification of the people at Bronzeville’s night club, shows the rise of the African American culture. Their social interactions relate to the liveliness of having a pleasurable night on the town. Through body language and interaction of men and women, Motley depicts a non judgmental setting.

Nightlife expresses the nightclub setting in the African American neighborhood with a wide variety of color and a feeling of sound. The connection between the two makes the painting moody and lively. Using oil on canvas as a medium allowed Motley to work slow and add as much or little detail he found necessary as proven in the front vs the back of the image.