A New Take On Feminism
Odyssey

A New Take On Feminism

….the idea of my being anti-woman when I AM a woman is ludicrous… 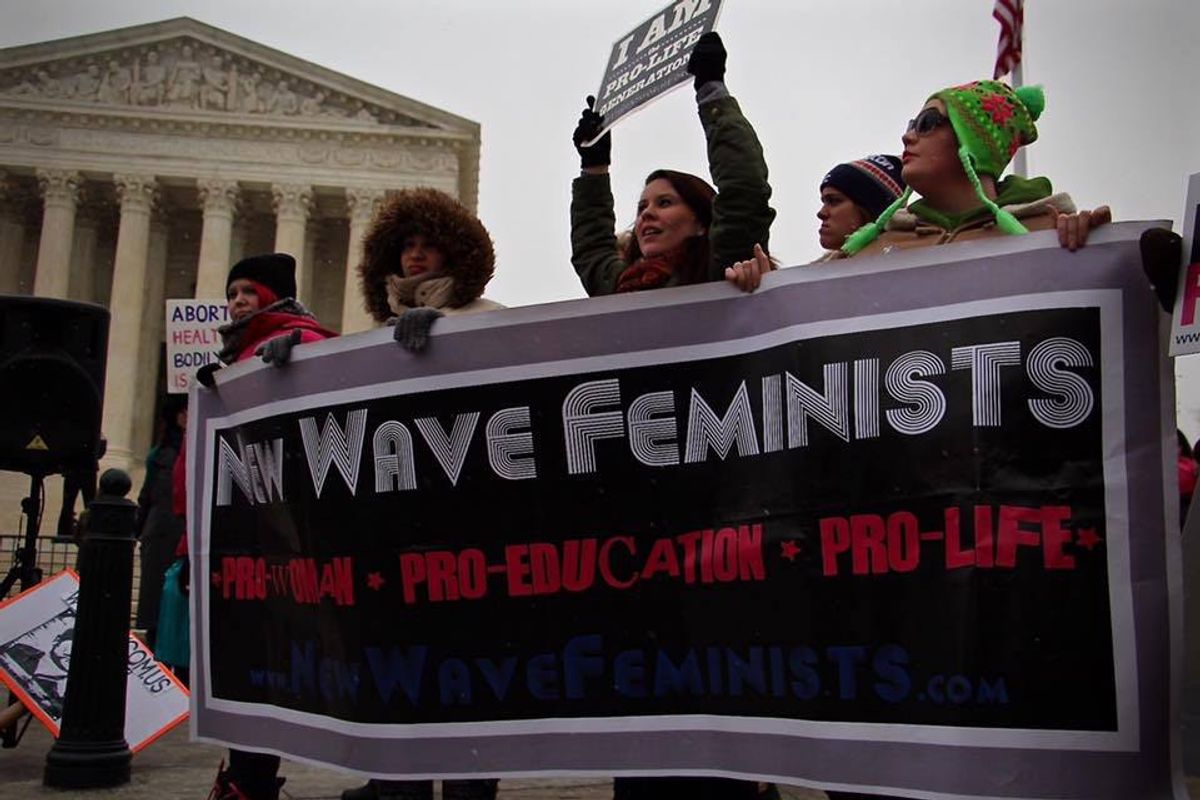 Sometimes, my Odyssey articles start out as Facebook statuses about things that make me mad, and this is certainly something that makes me mad: the constant attacking of those who are openly pro-life on the internet. I gotta be honest, this has bothered me for a long time and I'm finally able to put it into words. I’m not afraid of the backlash I’m going to be getting from this, nor do I care if I am attacked for my views. I’m too angry and passionate to care. Yeah, I drop what I see as truth bombs with brutal honesty.

So, hello, internet. Take the time to hear me “rant” again.

It seems that people like me are few and far between these days. I’ve been told this many a time. I am a twenty -year- old college student who is Catholic and pro-life. Yes, I dropped the pro-life bomb. Yes, I dropped the Catholic bomb. I don’t blindly follow the authority of the Church. I know where the Church stands on the issue and I have informed myself on the issue from both sides before taking a stand. The Church’s views on the subject are actually not archaic and most certainly are not held by exclusively the “old white men” of the stereotypical pro-choice argument (this argument is the default argument. It’s used when you can’t think of anything else to say). Students like myself are counter-cultural. And believe me, I have made many a professor angry because of the consistent life ethic I hold to and my desire to live in a world that is not a culture of death and darkness, but to live in a world that is a culture of light and life.

Which leads me to say this:

You know, I will never understand why posts in support of the pro-choice movement online are simply glossed over and accepted as part of what the world is. People who are open about this view are not attacked for it because of this person's right to "freedom of speech", and they are validated as being in "support" of "what freedom really is". Is it because they are the things that are in conformity to the way that society is going? It’s possible. The pro-choice movement has become extremely streamlined since Roe v. Wade. Don’t get me started on Roe v. Wade. I’ll go for hours.

Then, on the other side, if I so much as say ONE THING about being pro-life online, people are all over me, attacking me for being open about this view, saying that I am "less of a woman" because I am pro-life. They accuse me of being "anti-woman" (which makes no sense...I AM a woman) and stripping a woman of her freedom. I’m going to get some backlash for this one: I am confused that I am being told I am anti-woman when I am trying to protect a woman’s dignity through protecting the dignity of an unborn child…who may also grow to be a woman and need her dignity protected as well. I am told that I am letting my life be dictated by “old white men”, and I have to say THIS: DO I LOOK LIKE AN OLD WHITE MAN? No. That argument is invalid. Another thing I hear often is that chant: “Keep your rosaries off my ovaries.” Uh, no. The pro-life movement is not exclusively a Catholic thing. It’s not even exclusively a Christian thing. We come from all walks of life. Heck, there are even PRO-LIFE FEMINISTS. Yes, they do exist, and some are even MEN, like my friends, Joey and Damian (*sarcastic voice* HOW SCANDALOUS). Another thing I’ll say is that defining personhood is not the job of politics…it is the job of philosophy.

However, I am ostracized by society for my views instead of being supported for voicing my opinion. I am attacked for the fact that I am merely exercising my right to "freedom of speech". Which is not fair and pretty hypocritical when you really think about it. Every time I try to express my dissent for the laws currently in place to protect something I am morally opposed to, it seems like anyone who holds my beliefs are smothered by the media. Case in point: the media covering the fact that NARAL (or other groups of that nature) shows up at the March for Life in DC each January, but fails to mention that they are outnumbered.

I am often told that I am shaming women for having abortions by fighting against abortion itself. Well, you’re completely wrong. If you are a woman who has had an abortion, you are not a horrible human being. I care for your life, too, and would like to help you find alternatives to abortion if you are considering it, or if you have already had an abortion, I would like to help you find healing if you ask me to. Those people who are screaming at you and telling you that you are going to hell are doing the “pro-life” thing wrong because they are only thinking about one life when they should be thinking about both lives. To be truly “pro-life” means to care for all lives and preserve and defend the dignity of all.

That being said, let’s have a little review session on the meaning of freedom, shall we?

So, I am asking you, as a fellow human, to pick your battles. If you see something that is in contrast to your opinion and you can't help commenting on that post, engage in healthy dialogue and become informed about the other side instead of attacking others and name-calling. Sometimes, I feel like talking about something I disagree with isn't really worth the energy or time, so I just scroll past it. You are able to do the same. Disagree with things I post and want to fight? SCROLL PAST IT. You can't fight every battle and you can't win them all, either. So just pick a few battles, and even if you don't "win", at least finish strong.

You can continue broadcasting your views. I just ask that you allow me to broadcast mine as well.

Being "offended" by everything is something that should be left in 2016.