We Need Change And We Need It Now
Odyssey

We Need Change And We Need It Now

Are standardized test really worth it? 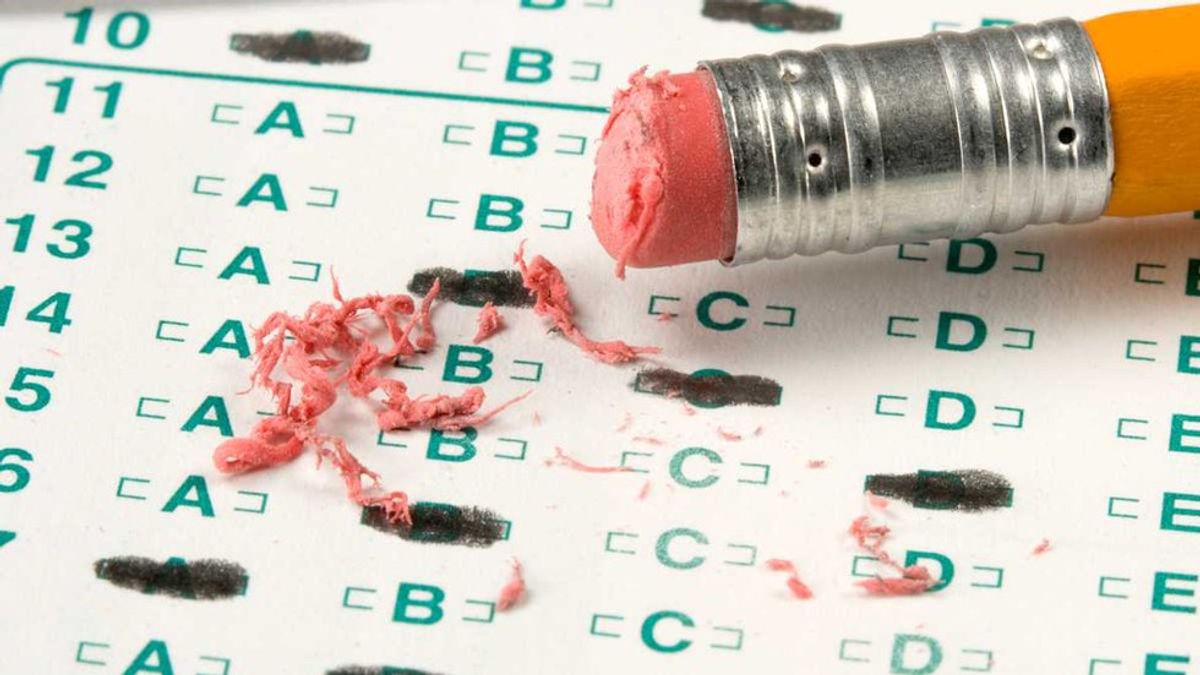 What are the first words you think of when you hear the words standardized test? Boring? Long? Waste of my time? Stress? Math sucks more than usual? The ASVAB, SAT, ACT, AP tests and more makes me want to jump out a window from all the math I don't know, and I know I'm not alone on that. You not only have to take these tests for college but for the military also, so no matter what path you choice for your future you have to take a standardized test one way or the other, you just choose what kind you take. For college, the higher your SAT or ACT score is the more likely you are to get into one of your top colleges, while for the military the higher your ASVAB score the more jobs that will be open to you. As the years are going by, the education system is getting worse and worse which makes passing a standardized test is even harder. These standardized tests are becoming more rigged by the day, by " can you guess what I'm trying to ask you" than the actually information for the test. Teachers aren't teaching the information anymore, they are teaching on how to take such test.

While writing this article, I found a recent study that students shouldn't be defined by just these timed tests. During a standardized testing week, students in fifth grade in Ohio spend at least eight hours just taking tests. One student couldn't take the stress from all the tests during the week, that during one of the tests she broke down. The teacher who was the protector for this test said, " I could do nothing to help her, I couldn't help her with the test. I could let her just take a little break then, but then she was going to run out of time, and she was watching the clock, she knew." There are pros and cons of having elementary students take standardized test; the only pro I can see is the state can see where a group of students are at and if the education system has to be changed for the better in any way. But the biggest con is fifth grade students shouldn't be having mental break downs during a test, I think if they want more accurate results they shouldn't have these test timed for elementary school students.

I know we can't just take out or take away standardized tests in general, they are truly the most affective way to test our education system in broad numbers. But I believe younger students shouldn't be stressing over a timed test, they should still have to take the test (let's face it there no other way to test our education system) but just not have it timed. The best way to make standardized test scores more effective, is to recreate them, not make them easier because then that won't be helping to see where all the students are at, but make them so younger students aren't crying over them in the middle of one. The education system now I feel is all about these tests, teachers are preparing their students for test after test after test, while they should be preparing their students for the world, especially in high school.

I graduated from high school in 2014, so I was lucky enough to not have to learn under the Common Core. This new learning program for grades K-12 states on their website, that the Common Core will prepare Amercia's students for success in college and career ready standards in english, language arts, literacy and math. Standardized tests are not the only problem in the education system anymore, it's also the Common Core. The Common Core has an entire new way of doing 2 X 4, which I believe is just stressing students out more. They should be able to say the answer is 8 and move on to the test question instead of explaining why the answer is 8. On the SAT, ASVAB and math regents tests, you don't have to explain why your answer is your answer, you just have to give them an answer and move on to the next test question. But according to the government that isn't the way to success anymore.

But one day at a time things have to change, it's not going to take one day, one person or one state, but one step at a time we have to change the way of standardized tests. It just has to begin with one person and others will follow suit with them and then that is when there will be a difference in standardized tests and the education system. The way things are now, the ones who pass such test scores with flying colors, the ones who got the 2400 on his SAT, the ones who have success and degrees are the ones who have to take a stand and demand change. But for anything to change we need to demand. Until we demand in change in our tests and education system teachers will continue to be judged by their students test scores. Some teachers will looked badly upon if their students scored poorly and some will look greatly upon, and the higher ups will think its their teaching style, meanwhile some students are better test takers than others.