My Tattoos, What They Mean, And Why It's Not Your Job To Care
Odyssey

My Tattoos, What They Mean, And Why It's Not Your Job To Care

"You're going to regret getting that tattoo, you know." 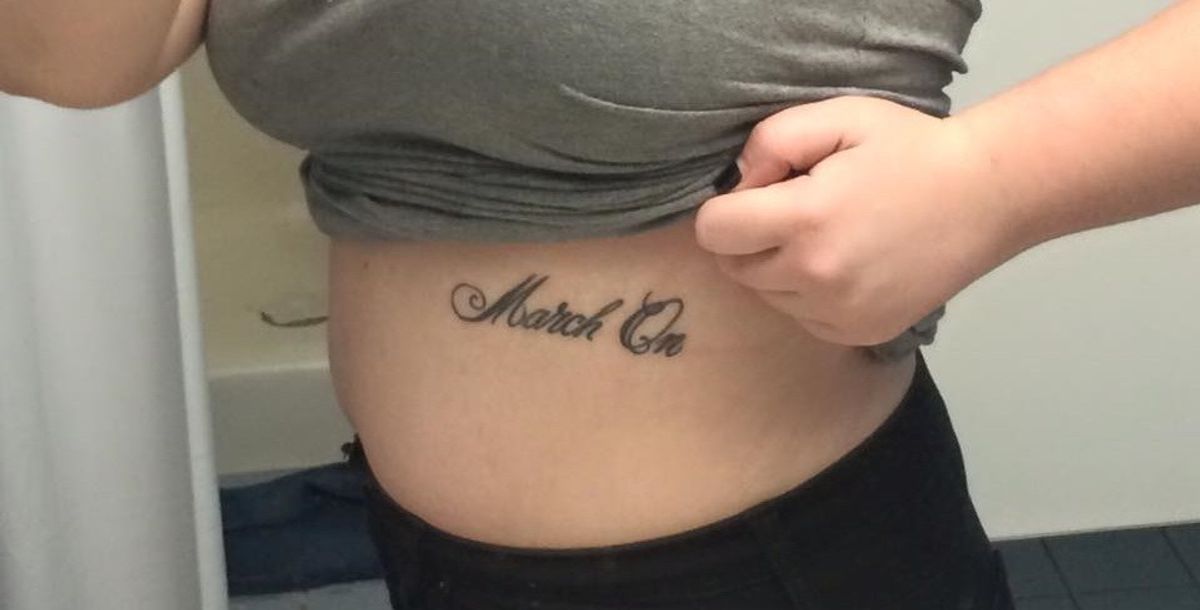 When I show people my tattoos, their very first question is always, “What do they mean?” My tattoos are so important to me, which is why I love telling people about why I got them. So here's the story.

My first tattoo is a cursive text, located on my left lower rib cage, which says, “March On”. I got this tattoo a few days after New Year’s Day in 2015. In the fall of 2014, Nick Kraus, a teacher in the performing arts department at my high school had passed away. I have many fond memories with him in marching band, and I will never forget the time he tried to help me learn how to play the marimba. I failed miserably, but he was so patient with me, I just remember us laughing the whole time.

There was a football game that our school dedicated to Nick Kraus in which everyone wore white, and many band alumni came to support the band. There is a chant that we would do before marching onto the field to perform our show, which ends in us yelling “March On” repeatedly. We had alumni come and join in on the chant, and I remember it being the most emotional March On we’ve ever had.

Up to that point, I had already planned on getting a tattoo but was unsure of what to get. It wasn’t until New Year’s morning, when I watched the Rose Parade that I figured out what I wanted. Watching the marching bands in the parade made me remember how important marching band was for me and how we came together as a family to support one another in that time of sorrow. There was no way I was going to get anything else other than “March On” as my first tattoo, and I’m so happy that I did.

My second tattoo was from back in fall of 2016. It is located on my right forearm, and is a tattoo of the Curvy Tree. The Curvy Tree is from a book series called "The Land of Stories," by Chris Colfer. In the book, a father tells his daughter a story of how there once was a tree in the shape of a spiral in the midst of trees that stood straight and tall. One day when people came to cut down the trees, they did not cut down the Curvy Tree because they would not have been able to make anything out of it. Its uniqueness is what saved the Curvy Tree.

To be unique is to be different, and to be different can be both a blessing and a curse. Most of the time it feels like a curse when it leaves you feeling isolated and weird. But it is your uniqueness that will keep you standing tall and can one day lead you to the things that are best for you.

In case you were wondering,- I’m a f***ing weirdo. I spent the majority of my life feeling like I never fit in and that I was too different for people to like me. Being able to finally get through my head that being unique isn’t a bad thing has truly changed my life for the better. I have the most amazing people in my life because I embrace who I am, rather than trying to be anyone else. It is always nice to have a quick reminder of that, which is exactly what happens when I look down at my arm and see my Curvy Tree.

Now that you know what they are all about, there is something I want you to know. You shouldn’t care that I have tattoos. I love knowing how much you appreciate the meaning and thinking that they look good, but you should not care whether or not they have a meaning. I can’t tell you how many times I get people looking at my arm and immediately saying, “That better have a meaning behind it.” Um. But why? Why is it so important to you that it has a meaning? The answer is that it isn’t.

The tattoo is on my body, not yours, so why do you care so much? Even though mine do have meanings, what if I get a tattoo of a bird because, hell, I want a tattoo of a bird. That would be f***ing awesome. If I want one, then I want one. It’s not up to you to decide whether a tattoo is a good idea or not when it is not on your body. Granted, there are still tattoos out there that aren’t the best idea, but it isn’t your job to tell the people who have them that. You can think it, though. You are allowed to have your opinions, but just don’t let your opinions make someone feel bad about something that they love that is a part of their body.

Also, please don’t ask me, “Well, how are you going to get a job?” First of all, what century are you living in? Tattoos have become increasingly more accepted as time goes on. Secondly, if someone doesn’t want to hire me because they don’t like that I have tattoos, then quite frankly, I don’t think I want to work there. My future and my career is my problem. I assure you that I was and am well aware of the consequences of getting a tattoo. I did not go into this without having a plan. I know where I want to go in life, and where I’m going does not involve my tattoos holding me back, I assure you.

All I am trying to say is that people aren’t getting tattoos to please the public. They get tattoos to please themselves. It’s OK if you don’t like someone’s tattoo or if you’re upset that a tattoo doesn’t have meaning. It is on our body, so don’t worry, it won’t ever be a problem for you. To conclude, I leave you with these words of wisdom:

Don’t be a judger, be a lover!