I Witnessed My First Protest, And It Was Nothing Like I Thought It Would Be

I couldn't make heads nor tails of it. 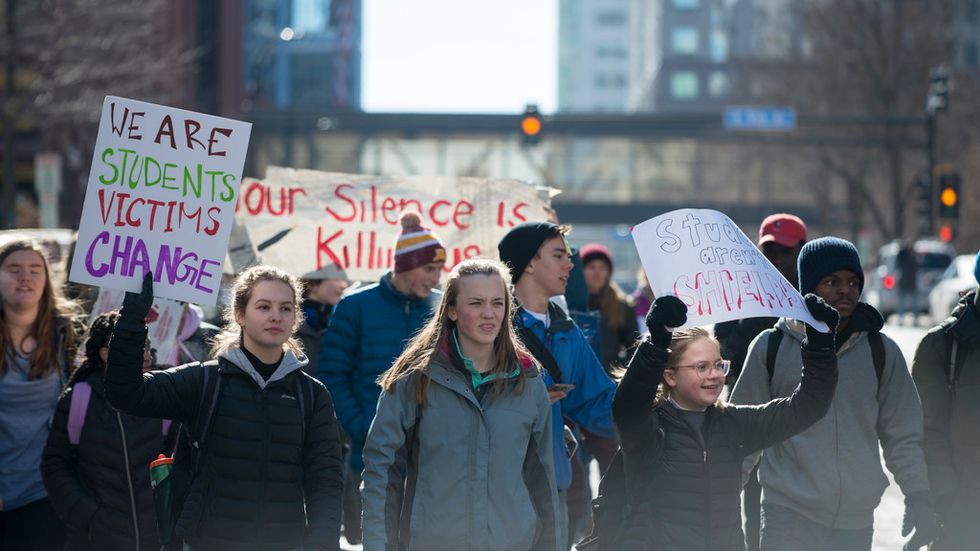 It has been a year or two full of protests — from the Women's March to Charlottesville to high school walkouts for Marjory Stoneman Douglas High's victims — and we haven't even gotten through the whole year yet.

Most protests I've experienced were through news clips or Snapchat stories. I've never participated in the major ones.

I think there's this idea about protests that we all hold to be true. There's something empowering about being in a crowd of people, all marching and chanting about the same ideals. There's uniformity and chaos, order and disorder.

To watch it happen even inspires a surge of emotion in me, as if I'm there too, stomping around the city with the same mass of people. But watching one in person has altered my perspective, almost imperceptibly at first, and then altogether at once.

It was the night of Nuit Blanche, a city-wide art show here in Toronto. I was waiting in line for a hot dog when I heard some voices chanting near me. At first, I thought it was another exhibit, but after I asked my friend to hold my place in line and slipped into the small gathering of people around the chanting, I realized it was something different.

"Free Tibet," one of the people holding the giant, four-foot sign said. "What do we want?" she asked.

"China out of Tibet," the group chanted back.

It's hard to write about an event and communicate the exact feelings that transpired. But it was a shock of embarrassment and pity, something that I wanted to tear my eyes away from. I wanted to put physical distance between myself and it.

The protest did not look like those on CNN with the swarms of people, the vigor and the energy. Her voice cracked from overuse when she shouted the chants. The hundreds of passersby and their voices often drowned hers. She was tired, she had been there the whole night, and she was shouting — straining, truly — to be heard.

There is something to be said about the futility of that moment. Their voices within the scope of that open Nathan Phillips Square were miniscule, easy to tune out. They did not inspire people to join them, or to even linger long after curiosity passed through. I felt uncomfortable, and I couldn't figure out why.

Maybe it was because of the insecurity of that moment. There was no clarity of being heard, no unequivocal ability to be. The gusto in her voice, the passion which trembled her voice when she shouted — it felt like a leaf blowing through the wind.

Maybe it was because it didn't compare with my expectations for protest: unity, coherence and power that is liberating. She looked so small that night, but she still yelled.

When her voice cracked, her face did not cloud in embarrassment or shame. She spoke on.

I don't think I could ever be like her, a person holding a sign, shouting to the wind. I don't think I've ever felt a passion like that, a remorseless fever like the one that she had. Because, perhaps, for her, it was enough to be there. To be holding the sign, to be speaking to the wind or anybody listening to its whistle.

I want to say that I saw its fragile beauty when I witnessed it, but I didn't. I felt my face grow hot. I felt the second-hand embarrassment I so often do. I left.

It was only with distance that I thought about her more. That I wished I could know her courage, keep it as my own — understand it. I keep trying.

politics
Report this Content
This article has not been reviewed by Odyssey HQ and solely reflects the ideas and opinions of the creator.
Swoon

11 'Harry Potter' Desserts Fans Can Bake For Harry’s Birthday, Like The Dursleys NEVER Did

5 Podcasts Every College Girl Should Be Listening To Right Now

I Will Not 'Pucker Up' For Noah Flynn