My Final Race For SBU

The virus in my chest wracked me with pain and my body felt as if it were on fire, and still I dove forward into the homestretch and bolted for all I was worth, throwing myself over the line for the final finish of my athletic career as a Stony Brook Seawolf. 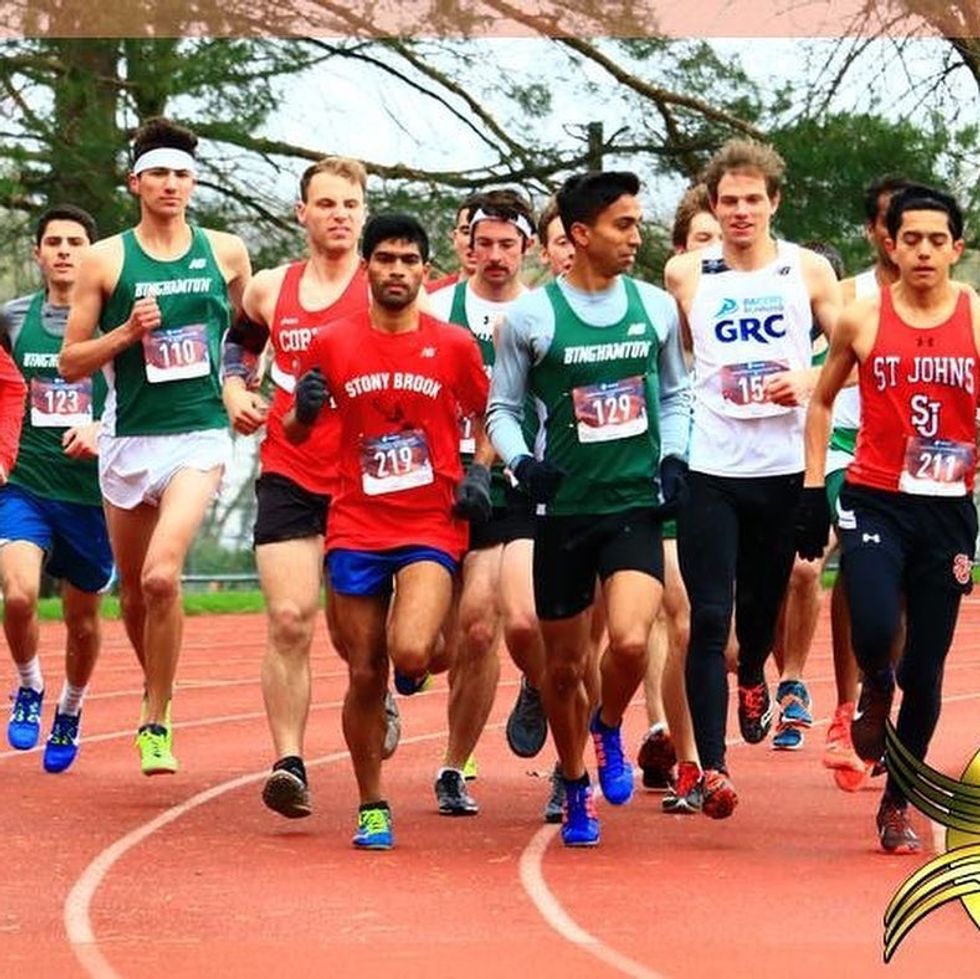 I awoke with a start in my hotel room, feeling a slight bout of nausea rush over me in the darkness before the morning. Tiptoeing quietly to the bathroom, I attempted to still my tremors as a hacking cough wracked my body, cursing my unfortunate luck for having caught a virus in the days leading up to today. Gripping the basin, I silently contemplated my frame of mind after having not slept well the previous night — was I really ready for this? For just a moment, I considered taking the day off, but almost immediately relented; this was my final race, and I'd be damned if I didn't put forth the full measure of my effort as a Seawolf for my team that had come so far.

Minutes later, I donned a long sleeve shirt and shorts and made my way outside with my teammates for a shakeout run, the chilly Binghamton air giving me pause as I thought about how I would run this last 5k. Time seemed to slow down once we returned to the hotel and grabbed breakfast, and our departure from the Comfort Suites we had stayed in was marked by a contemplative silence as we all attempted to delve into our competitive mindsets for what was to come.

As we drove through Vestal and pulled into Binghamton University for their Spring Relays, I kept going over my race strategy in my head, while memories unbidden kept leaping to the forefront of my mind as I looked around at my team. We had all grown so much from the motley crew we were at the beginning of our journey. We had taken Stony Brook from near-obscurity in NIRCA to going to Northeast Regionals and NIRCA Nationals, a far cry from our pipe dream so long ago. Our drive, dedication to each other, and our willingness to push ourselves past adversity were the factors that put the Seawolves on the map.

As we exited our cars and began to warm up for our events, a light snow began to fall, and soon the wind picked up while the temperature dropped, creating a frigid environment for my last meet. Despite my efforts to stay as warm as possible, the sub-40 temperatures had me shivering as I was finally called to the starting line for the Men's 5000 meters. As the gun went off, I leapt to the front of the pack and hung with the four Binghamton runners who set the pace, trying as much as possible to conserve my energy by letting them weather the wind and tucking in behind.

The snow began to pick up even more rapidly as we flew by, with blasts of frigid air hampering our pace and causing a morbid chill to settle in our limbs as we churned our arms and legs against the tempest. I could feel the virus in my chest obstructing my airways, making each breath a little bit tougher as the laps wound by. I began to lose my place in the lead pack, bit by bit, until I was nearly 20 meters behind the top group, and the unending assault of snow and wind continued to beat me down and deplete my spirits. I thought, for a moment, that I could do no more.

Dragging myself past the starting line again for what seemed to be the umpteenth time, I chanced a glance into the stands and saw my team cheering me on, shouting my name in the wild weather. They had traveled here just as I had to race for each other and believed in me, even now, when I did not even trust in my own strength. They trusted me and knew what I was capable of when I refused to back down. Seeing their enthusiasm and will to fight, I made my decision.

As we entered the final mile of the 5000 meters, I began to surge as hard as I could, pushing bit by bit to reestablish myself into the lead group. The unrelenting snow kept pounding down and the wind threatened to push my slim frame out of my lane, and still I pushed on, my arms driving forward, my legs extending as far as possible, my heart pumping. The virus in my chest wracked me with pain and my body felt as if it were on fire, and still I dove forward into the homestretch and bolted for all I was worth, throwing myself over the line for the final finish of my athletic career as a Stony Brook Seawolf. As I lay gasping for air on the frosted track, I allowed myself a sliver of satisfaction — despite the conditions and my infection, despite my own doubts, I had done it.
cross country
Report this Content
This article has not been reviewed by Odyssey HQ and solely reflects the ideas and opinions of the creator.