La La Land demonstrates that musical theatre can be simultaneously whimsical and substantial. 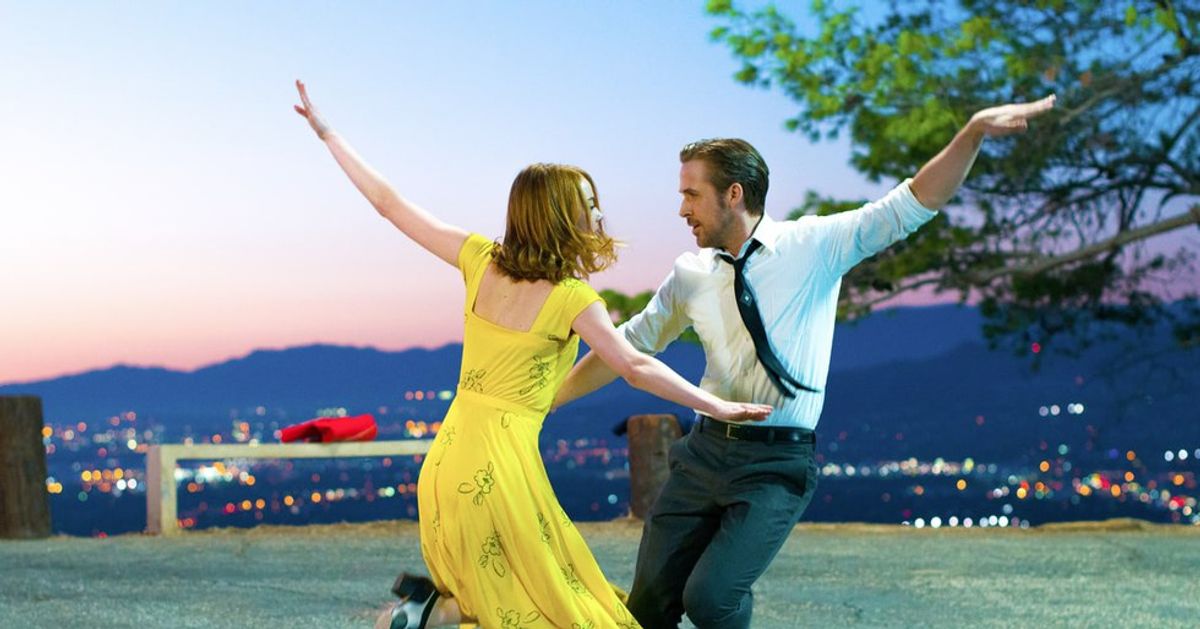 I saw La La Land just before New Year's, and since then I've come across a huge number of articles reviewing and critiquing the film. As a musical theatre major, I'm interested in how this movie is bringing my art form into the mainstream. What does La La Land say about musical theatre in its form and content?

Overall, I'm happy that musical theatre is becoming more popular, but it also makes me uncomfortable because that's my life and career and I don't want it to be misrepresented as shallow. I take issue with a lot of commercial musical theatre, because I find it promotes spectacle over story. La La Land certainly does not lack spectacle. But, in going to art school and seeing and making more "serious and legitimate art" (all of which I have greatly enjoyed), I think I forgot that part of why I love musical theatre -- and decided to study it in the first place -- is its whimsy. La La Land was just plain fun to watch. The stunning visuals exemplified whimsy, but later in the movie, the qualities that made the film so much fun were utilized in a truly meaningful way. I'm so glad this movie demonstrated that musical theatre is more than fluff, while retaining the value of fluff.

A major criticism of La La Land was Ryan Gosling and Emma Stone's lack of singing and dancing ability. It's valid. Increasingly, as we see musicals coming back to Hollywood and movie stars on Broadway (take Emma Stone's stint as Sally Bowles in Cabaret), celebrities who don't sing or dance are cast in leads. As someone who is trained in both singing and dance, I was quite aware of the simplicity of what Gosling and Stone were doing. I will admit that as I was watching the movie, I couldn't stop thinking of all the musical theatre students across the country who could have danced and sang the roles much better. But at the very least the choreography was clean and the singing wasn't so horrendous that it distracted from the story. Actually, I think singing gets entirely too much attention in musical theatre. I find that if you act the shit out of something and hit all the notes, however loudly, technically or prettily, it's still effective. I've also seen performances where the vocals are SO good that they actually distract from the message/story/lyric of the song. Gosling and Stone's song and dance skills are adequate in communicating their relationship and moving the plot forward. It would have been more impressive if they had shown off some real technical skill, but perhaps distractingly so.

One plot point in La La Land that really interested me was Emma Stone's character Mia's decision to put on an autobiographical one woman show. I really appreciated that the movie recognized this aspect of the business: self-promotion, in my experience, is the only reliable way to get noticed. All actors I admire most have taken their careers in their own hands and and written or produced their own work. (Mia's decision to produce her own show also rang true for me personally, as I co-run a cabaret company at my school and have promoted and produced my own work.) I truly admire that Mia works hard to be recognized throughout the film; too often, actors in mainstream media find success ridiculously fast (I'm looking at you, Rachel Berry and Karen Cartwright!) just because of their "extraordinary talent." But despite Mia's obvious talent -- I mean, it's Emma Stone, plus we see her giving a moving, tearful monologue in one of her auditions -- it's clear she has spent years putting in the work and getting herself seen. Mia auditions throughout the film, but never books anything except for one callback in the middle of the movie. In the end, this catches up to her, and she considers giving up. This is a place I'm all too familiar with, and I often see my friends go through the same self-doubt. Every artist is terrified that they're not good enough, and most of us take rejection as a confirmation of that fear. But as evidenced by the way things turn out for Mia, "not now" doesn't mean "not ever." Mia's hard work pays off in the end, but talent alone isn't enough to get her noticed. She has to self-promote. As a theater major, I really appreciate that Mia's struggle to make a living as a performer is shown in an emotionally realistic, human way.

This is not an overall rave, but all in all, I think La La Land beautifully portrayed the artistic struggles my peers and I face. Despite my issues with the lack of POC and LGBTQ+ representation and the fact that Ryan Gosling's character was a total dick, La La Land touched me as an aspiring actor. I would absolutely recommend it to my peers, even the most skeptical of mainstream musical theatre.