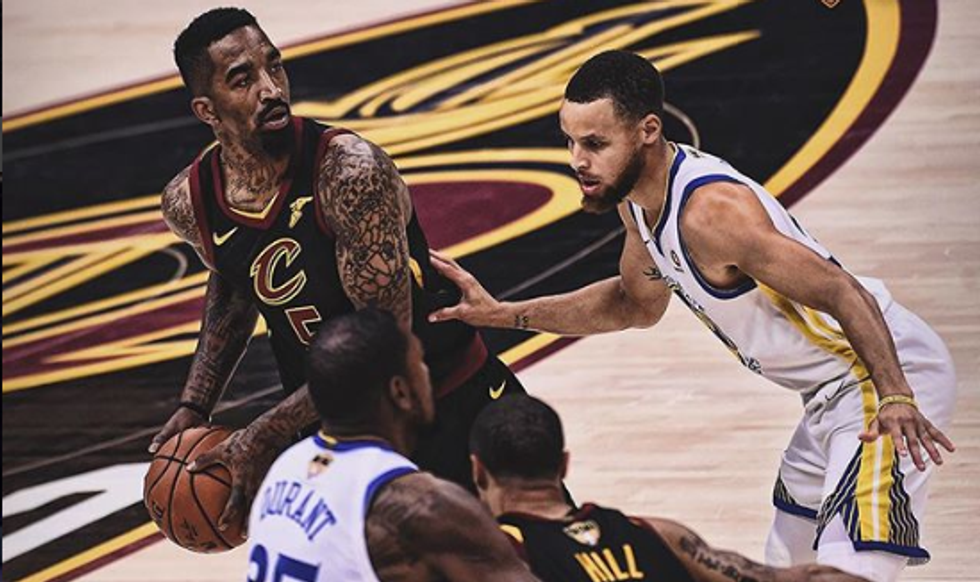 The best part of writing for Odyssey is that you can workshop many ideas and visions. So I'm going to try something that has probably been done in order improve my weekly article production. Monthly shoutouts will be broken down into 3-4 categories: Entertainment, Sports, Politics, and something about Twitter/Memes. Now, I get swept away with doing absolutely nothing, so I might lose track of all the news each individual week, so fair warning if I missed something you deemed important from last month. So here we are with the Second edition of Monthly Shoutouts: May.

Aside from destroying half of Earth's population, Thanos rocked both nerd's hearts and the box office back in May. Avenger's Infinity War was a cinematic spectacle 10 years in the making. In fact, out of those 10 years, we've had about infinity different superheroes appear on the big screen. Of course, that's an exaggeration but it feels like an accurate estimate.

But let's be honest, Superhero movies are like our generation's version Western movies that will soon be taken over by various Netflix shows in 3D. And I was on the brink of tears when Tom Holland(the best Spider-Man) dies in Robert Downey Jr.'s arms if I'm gonna be frank. Plus, Thanos wiped out half the population with just a snap but doesn't consider listening to options like using the Infinity Gauntlet to distort reality to benefit the universe? But whatever, Shoutout to Thanos for taking out the Avengers and for solidifying the fact that these movies won't go out of style anytime soon...

Sports: Game 1 of the NBA Finals

Thank goodness this moment happened in the month of May, or I would've had nothing to write about for sports! Picture this, Lebron James and the worthless Cleveland Cavaliers are facing-off against the Golden State Warriors who have 4 Hall of Famers on their rosters. George Hill ties the game after making one free-throw which became the second worst thing to happened in this game. But the worst thing to happen in this game was JR Smith's blunder that cost the Cavs and Lebron their chance to at least have a win against the greatest team ever assembled. JR got a rebound and ran out the clock because why not, and what came form that was Twitter lighting on fire and using Lebron's reaction as a foundation for a meme that will probably haunt JR for the rest of his career.

And speaking of rings, in my personal record book Kevin Durant has none. You could've easily put a hobo on the court with Curry, Klay, Draymond, and Iggy, and those guys with an actual hobo could've won the championship. Durant was up on these guys three years ago and blew it, all because the Warriors are stellar and because OKC has the worst seafood restaurants in America. So, Shoutout to JR and Game 1 of the Finals for giving us more memes and for making me hate the Warriors even more.

Throughout 2018, gun violence has been a staple of action and political opinion. To add to the cruel list of shootings in this nation, Santa Fe High School in Texas fell victim to the plague that sweeps the nation. A dispute whether to keep the guns or to ban them, or to bestow blame on the students for protesting in the first place. In all honesty, America has sort of been desensitized to the crime and death that sweeps this country.

These shootings have become a situation that we almost shrug our shoulders to when the headline pops up on our phones. I hope for us to not approach this as a political issue but as an issue that affects all of us emotionally. So, Shoutout to the Families and Students of Santa Fe High School for being a pinnacle of hope and for their bravery in this confusing time in our country.

Rap beef have always been fun for everyone, everyone except Drake who seems to be either winning or losing beefs. Current rapper and former dope dealer, Pusha-T, came after Drake for having ghost writers supplying him with bangers. So Drake rebutted with lyrics that he probably didn't write and proceeded to call Pusha old and washed. At this point, we thought it was over. the beef of the decade has ceased. But bruhhhhh, Push came back with some heat that changed the game for like a month.

Pusha-T released a track that entailed disses that haven't been heard in a long time. He speaks on Drake's family and how he was never loved as a child. But what really had us shook was that Pusha dropped some serious news. Drake has a child that has been hidden in Canada with a pornstar mother. But the crazy thing is that we completely forgot this whole situation right after Drake dropped a Degrassi themed music video. So here's a shameless plug for my article about this Drake/Pusha beef here. So Shoutout to Drake and Pusha-T for giving Twitter a bone to chew on while our world is crumbling.

These are just some personal shoutouts because I have nothing else to do and I like to give people shoutouts.

This is the only PS because it's the Summer and I'm too lazy and broke to socialize and make provide myself a chance to prosper in an ever-changing society. That was a joke, but Shoutout to Netflix for supplying the content that's keeping me sane and occupied with stuff that's not essential to my well-being.