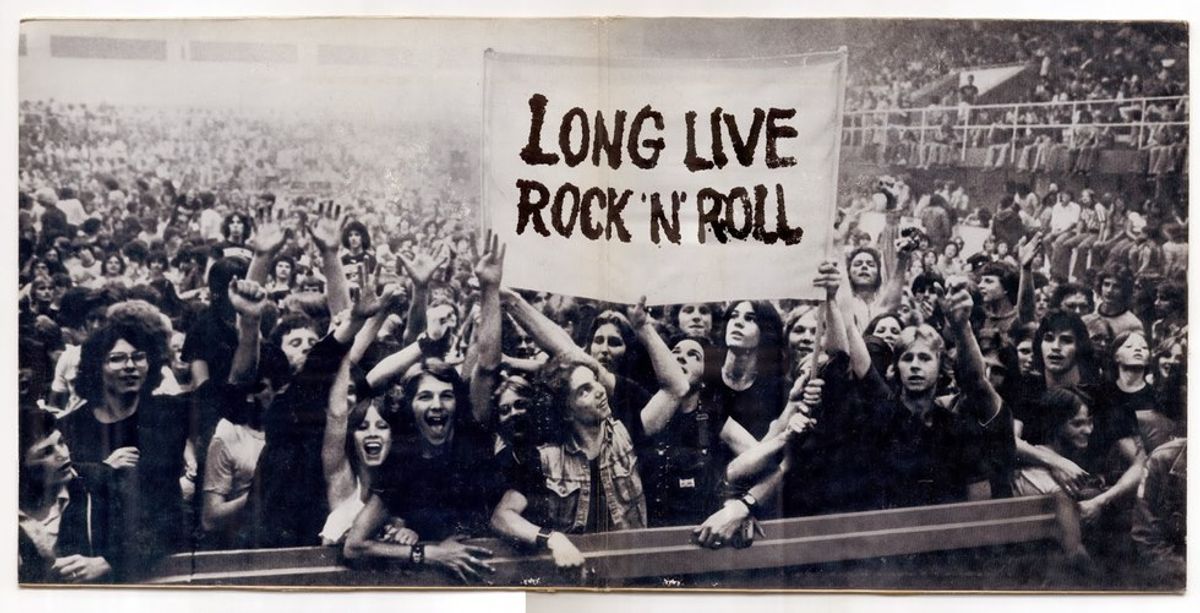 People always tell me I’m an old soul and that I was born in the wrong decade. I love vintage dresses from the 1940s, old vinyl records from the 50’s and 60’s and literally every aspect of the culture from the 1970’s. I definitely agree that I am an old soul, but I wouldn’t have wanted to have lived during any other decade. The beauty of being a millennial is that I have access to all of the great music from my generation, from my parent’s generation and from my grandparent’s generation. I grew up listening to music from a range of decades and this exposure to such a diverse variety of music fostered my love for music history.

So, from your resident old soul and music enthusiast, here are five of my favorite classic rock songs of all time. Because, rock and roll never ends.

"It's Still Rock and Roll to Me" – Billy Joel

I have always been intrigued by the inner workings of the music industry – to me, music is music, no matter what the singer or the band happens to look like. Perhaps that is why this 1980 hit off of Billy Joel’s album Glass Houses always spoke to me. The song tells the story of a musician who is being told by the industry that he needs to change his look and his style in order to remain relevant with the younger crowd.

Throughout the song, Joel pokes fun at all of the new trends in music in the late 70s (punk, new wave, funk). By the end of the song, he has made it quite clear that he would rather stick to his authentic rock roots. I can appreciate any artist, band or musician who takes such pride in the type of music that they create. Musical integrity in the music industry is becoming increasingly scare, so Joel’s message continues to ring true to this day.

Many millennials are likely familiar with the “clean”, cookie-cutter rendition on this song that was performed by Pat Boone. In 1955, when Little Richard originally wrote and recorded this piece, racial segregation was extremely prevalent in the music industry. Many mainstream radio stations at the time refused to play “black music” and early rock n’ roll, fearing that this music would somehow taint America’s youth. In order to get “race records” played on mainstream radio or performed on a TV variety show, the songs would have to be recorded and performed by some overly clean-cut pop singers. Sorry Mr. Boone, but you are no Little Richard.

I wish more people my age were familiar with the iconic opening cry of the song - "A-wop-bom-a-loo-mop-a-lomp-bom-bom!". I wish Little Richard was remembered by my generation as a founding father of rock and roll in the same way that we all remember Elvis. Tutti Frutti truly changed the course of music history by ushering in the era of rock and roll. With distinct rhythm, hard-driving sound and wild lyrics, this particular song helped to set the standard for all future rock music.

The lyrics of “Femme Fatale” reference an archetypical female character, seen throughout literature and art, whose mysterious and seductive charms lure lovers into dangerous, compromising affairs. Andy Warhol, the famous artist of the Pop Art movement and the producer of The Velvet Underground’s 1967 debut album The Velvet Underground & Nico, asked the band’s frontman, Lou Reed to write this song specifically about Warhol’s “Superstar” Edie Sedgwick. Sedgwick was a regular at Warhol's famed salon, The Factory, and she later became Warhol's film muse, his own femme fatale.

There is something irrevocably sultry yet romantic about Nico's vocals on the "Femme Fatale" recording. It is one of only three tracks on The Velvet Underground & Nico album where Nico can be heard singing the lead vocals.

This song will forever hold a special place in my heart for two reasons. “Femme Fatale” was a gateway song that led me to discover the musical works of The Clash, David Bowie and The Stooges. But more importantly, it was the first song I had ever heard that depicted the woman as having the upper hand in the “flirtationship” – which is ironic because this song was produced prior the feminist revival of the 70’s.

"The House of The Rising Sun" – The Animals

While the British rock group the Animals turned this song into an international hit in 1964, the traditional folk tune had already been around for ages. No one knows who originally penned the lyrics to the song, but we do know that it tells the story of a life gone wrong in New Orleans. Prior to the release on the Animals’ rendition of the folk song, various artists had recorded their own versions including Woody Gutherie, Dave Van Ronk and Bob Dylan. And since 1964, everyone from Dolly Parton to Five Finger Death Punch had created their own cover of the song. But in the grand scheme of things, no other version struck a chord with audiences quite like the version performed by the Animals.

There is something mysterious and haunting about Eric Burdon’s vocals on this recording. He voice is deep, raspy and soulful as he sings about a life of degradation. With the eerie pulsations of the organ in the background, the song has the power to draw listeners in and keep them connected and engaged throughout. To me, “The House of The Rising Sun” is the folk rock tune of the century and thus, will forever remain one of the quintessential rock songs of all time.

"Have You Ever Seen The Rain?" - Creedance Clearwater Revival

"Have you ever seen the rain, coming down on a sunny day?" There is something undeniably beautiful and artistic about the lyrics to this song, which was written by John Fogerty and released as a single from the album Pendulum in 1971. For years, people have speculated whether the lyrics make a reference to the Vietnam War, with the “rain” symbolizing bombs falling from the sky. Some music critics have said that the song focuses on the fading concept of idealism in America after the various tragic events of the 1960s. In interviews, Forgerty himself has stated that the song depicts the unhappiness of the CCR band members, even with all of the success and the fame.

Regardless of what the song was originally written about, it continues to appeal to audiences and recording artists alike. Joan Jett, Saving Abel, Johnny Cash, The Lumineers, Rise Against, The Fray, REM and The Ramones are amongst some of the famous and influential musicians who have covered “Have You Ever Seen The Rain?”. The song speaks to the masses, highlighting the struggles of the everyday person, no matter their gender, race or age. That sort of grand appeal is what makes this song inherently timeless.

I am attracted to genuinely good music – music with substance, music with deep-rooted emotions, music with a back story. Each of these songs speaks directly to an experience that I have had in my life or to an emotion that I have felt. I guess you could say that music is my self-prescribed therapy.