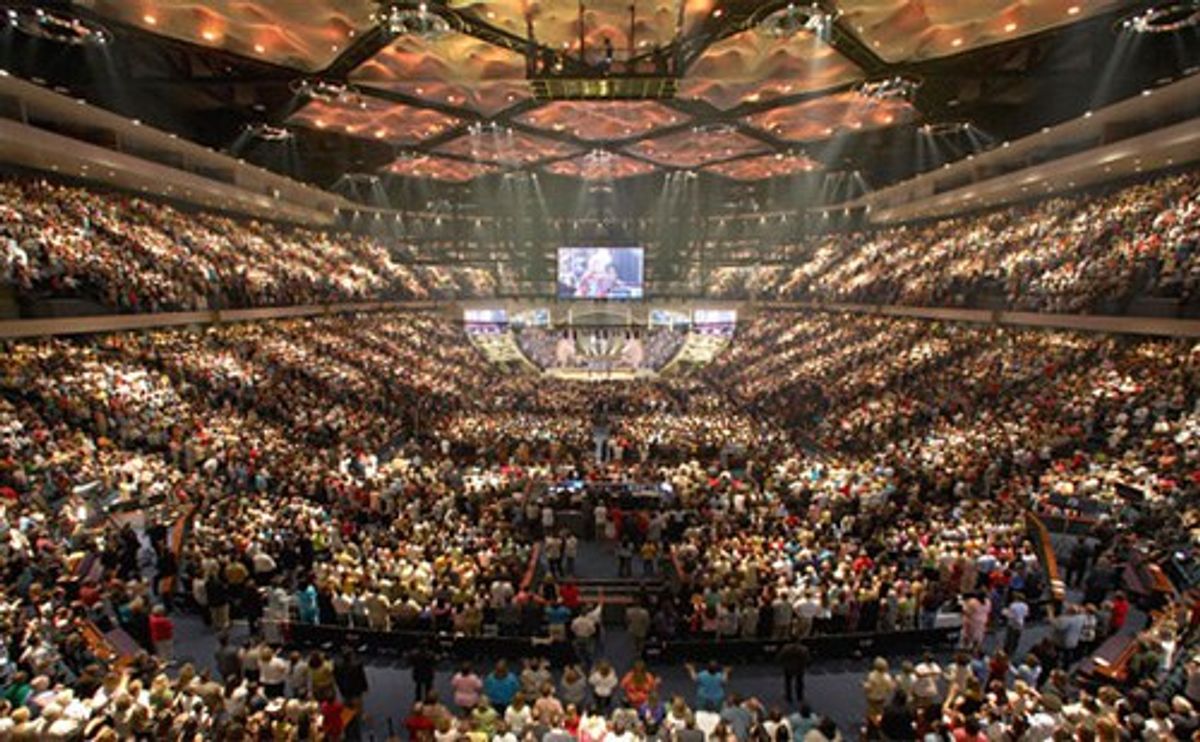 A megachurch is characterized by five traits, as researched by the Hartford Institute for Religion Research.

4. A multitude of social and outreach ministries

America has more than 1,000 megachurches, mainly located in metropolitan areas such as Houston, Dallas and Chicago. The largest in the United States is pastored by the famous Joel Osteen. Lakewood Church in Houston, Texas, has over 38,000 attendees on an average Sunday morning as well as 7,000 Americans viewing the service on television. Not only has Osteen become a well-respected minister, he is also a New York Times best-selling author.

Because megachurches are so large, they can offer a wide range of opportunities for believers. Most megachurches offer preschool, personal finance classes and mission opportunities that most Christians could only dream about. Also, megachurches offer state-of-the-art worship services including large praise bands, huge arena-like locations and several different worship options to choose from based on what your worship style is like. Another advantage of megachurches is the lack of financial worry. These churches are often worth millions, meaning there will not be last-minute fundraisers to repair the air conditioning or replace the carpet. Megachurches don’t even pass an offering plate anymore. Most have online donation methods or an electronic kiosk outside the sanctuary that functions as another way to tithe.

These churches are well-oiled machines that often run similarly to, if not exactly like, the largest corporations in America. With a multitude of resources available and a vast array of mission opportunities, why isn't everyone attending a megachurch? Isn't worshiping with thousands just preparing us for heaven when we will be praising with hopefully trillions of other believers?

While I have never personally been to a megachurch, I am a supporter of reaching as many people as possible with the Good News. The name of a huge church alone is enough to fill seats, BUT is the name of the church filling seats or is it the mission of The Church?

The commandment of the Lord is very clear in scripture. He says to go and make disciples of all nations. On average, megachurches in the United States spend $690,000 on global missions. I love that huge number. I love that large churches are following the plainest commandment in the Bible. I love that people across the world are reaping the benefits of American Christians. However, let's put that number in comparison. First Baptist Church in Dallas, Texas, spent $130 million on structural renovations in the church. That is almost 200 times more than the national average of overseas mission spending. For reasons like this, megachurches are rarely given any good attention.

While there are real, true advantages to a megachurch, there are also a lot of disadvantages. There is an obvious lack of community among megachurches. Because there are so many people, it is difficult to create those true, meaningful relationships among your fellow believers. Most megachurches have multi-site campuses, meaning that all the members very rarely worship all together.

Also, the pastors in these churches are so often focused on as celebrities that it's relatively impossible to seek guidance from your pastor. There are other opportunities to seek counsel from trained pastors in the church, but not from the person who preaches to your heart every Sunday morning. If you are a part of a megachurch, I urge you to evaluate who you're worshipping on a weekly basis. Is it your award-winning, published pastor, or the Lord whose collection of words is the most sold book in the world?

Now, I want to see what scripture has to say about the Lord’s intentions for the Church.

In the book of Acts, Paul writes in chapter two, verse 42, "They committed themselves to the teaching of the apostles, the life together, the common meal, and the prayers."

1. Commitment to the teaching

2. Devotion to a life to honor and support one another

3. Observation of the Lord's supper

4. Promotion, teaching and practice of prayer