Give MTG a try

5 Reasons To Consider Playing 'Magic: The Gathering' This Holiday Season

A card game optimized for YOU 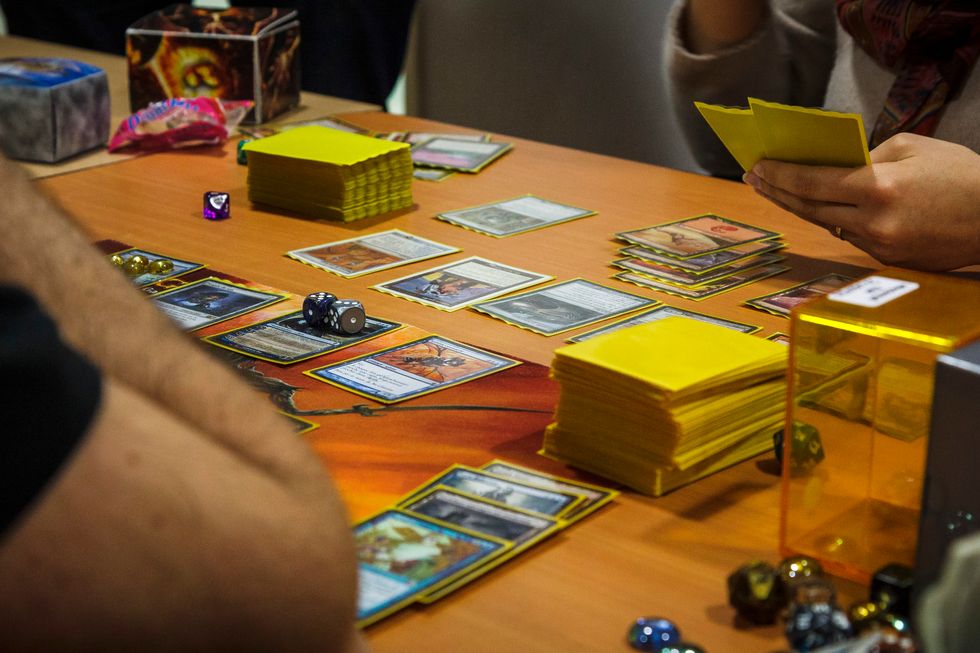 Tis the season for trying new things especially with the new year just around the corner. In an age of technology and entertainment, you can easily get lost in screen time whether it's devoted to your phone, computers or television sets. Instead, we should consider stepping away from the screen and looking at something simpler and easier on the eyes.

Magic: The Gathering is the pinnacle of trading card games, aging all the way back to 1993. It was founded by Richard Garfield with the intent to bring friends (or spell slingers as they are in the card game) to gather and enjoy hours upon hours of card gaming fun. The game challenges players to be flexible on the fly, using both strategic gameplay and political gain to either come out victorious in game or fall defeated to their opponents.

Still need some convincing? Well, here are 5 reasons to consider looking into Magic: The Gathering.

1. There are several formats to choose from!

Magic: The Gathering, or MtG, is home to several types of formats for players to choose from. The most popular of all the formats are standard and commander.

Standard is a format revolving around the most recent sets of cards and challenges the player to construct competitive decks to use for events. These decks allow for a maximum of 60 cards and is set as a player vs player format. Standard is a competitive format which rewards its players with greater events they can attend through winnings and invitations.

On the flipside, there is the commander format. Commander was born out of a fan based idea which was picked up by Magic's company, Wizards of the Coast. This format allows the player to choose a general as a basis of their deck. From there, they usually build a 99 singleton card deck that assist your general. This format is popular among more casual players, allow for creative decks to be built with less limitation and more imagination.

Besides these, several more formats you can explore through the MtG website.

2. The lore behind MtG is expansive and immersive.

The storyline for MtG began early on and has continued to grow and thrive to this day. Players are able to see hints of this storyline through official MtG articles, videos, or pictures as well as through the cards themselves. Most cards will indicate relationships to the lore through art or flavor text on the cards. Flavor text is known as the italicized text on cards which either has a quip said by a character in MtG or has a defining narrative line. In MtG, you will learn about several worlds or planes, powerful dragons, and a handful of different species such as gorgons, thrulls, eldrazi and more.

Along with this, MtG's website provides more information about the lore and story as well as several books sponsored by Wizards of the Coast themselves.

3. It doesn't have to be an expensive hobby.

The Black Lotus is the most expensive card in the entire game, listed around $30,000. This year alone, a Black Lotus was bought for $87,000 on Ebay- but WHY would someone spend that much money on ONE single card you may be wondering. The answer is simple: it's collectible. The same reason someone would buy Michael Jordan's original jersey or someone would want to buy a celebrity's house. It's well known, a collectible, and is hard to get.

Lucky for you, you don't need to drop that much money to get into MtG. For learning purposes, most local card shops will give you a free starter pack if you ask. Besides that, there are several useful videos online that will help you learn the basics of the game. Depending on your first deck, you won't have to spend more than you have to if you're smart. There are several websites that provide deck construction tips depending on your format.

A rule of thumb is to not spend money on cards you don't need. You can always consider trading for cards or borrowing decks from friends if you want to play at your local card shop. It isn't about how much money you spend on your deck, but how competitive and well constructed your decks can be. A $500 deck can still be beaten by a $25 budget deck if you put your effort in the right places.

4. The art for cards is breathtaking.

MtG isn't limited to one type of art style. Over the past few decades, the art style has transformed from a rigid style to one that is fluid and unrestrained. Hundreds of artists work on the art seen on cards and help immerse the player in the world MtG intends on making. Art was one of the biggest reasons I started playing because it's something that can attract any type of person, you just need to find the write card. For me, it was the first time I saw the praetors. They were creatures similar to the monsters in the Silent Hill game franchise. Since then, I have dedicated my time to either building decks around cards I find beautiful or intriguing and buying art books if I can.

5. It's a game personalized to your taste.

There is no limit to what you can do in Magic- unless it's banned. Even then, you are able to manipulate the game to your desire. Magic is a game for anyone and is really on a spectrum ranging from simplistic to complex just depending on the player. You are able to play a multitude of formats either with friends, family, or complete strangers who have the same intention as you do: have fun with some cardboard cards. At the end of the day, Magic is what you make it. If you're more competitive, go for the competitive scene. If you are a casual player, consider dipping your hand in commander and testing out several types of decks.

Head to your local game store and try Magic out for yourself. If you think it may be too much of a hassle to do or aren't confident in going to a game shop alone, bring a friend or try Magic: The Gathering Arena online. It serves as an online platform for players to get the same MtG experience on their computer.

The worst that could happen is that you won't like the game, but at least you tried it out this holiday season.