What We All Need To Do To Listen To Each Other A Little Bit Better
Odyssey
CurrentlySwoonLifestyleHealth & WellnessStudent LifeContent InspirationEntertainmentPolitics and ActivismSportsAdulting
About usAdvertiseTermsPrivacyDMCAContact us
® 2023 ODYSSEY
Welcome back
Sign in to comment to your favorite stories, participate in your community and interact with your friends
or
LOG IN WITH FACEBOOK
No account? Create one
Start writing a post
Politics and Activism

A Reaction To The Most Recent Events In The World 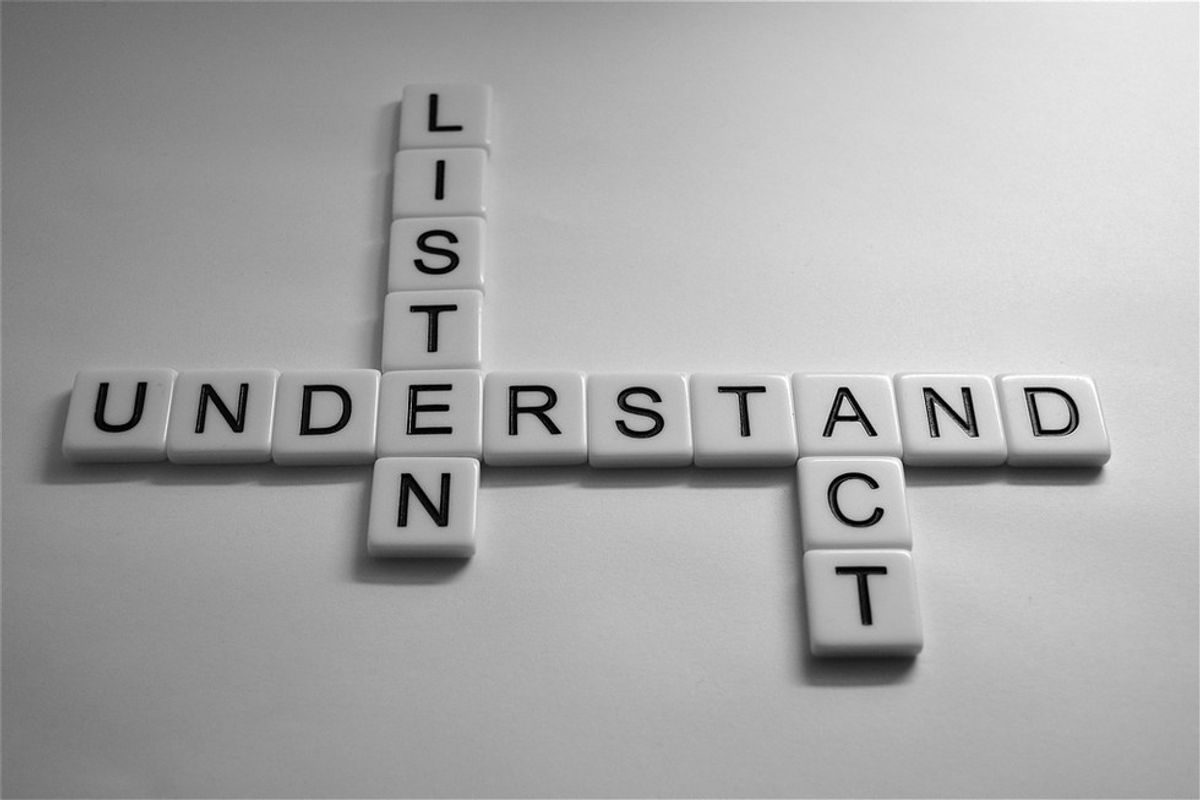 In trying to write up a reaction to the recent events, more specifically the Women’s March, I started to realize something. The Women’s March itself is something that should have a united mission in the respect of women’s rights. Instead, all I saw was a blatant hatred for the newly inaugurated President. It is evident that he has said and signed off on a lot of things that the majority does not agree with.

This is not the article that I choose to state my beliefs on him and what he has said and done. In the attempts I made to sit down and write this article I just couldn’t bring myself to explain how all of this made me feel without having to just box myself into a category of people I don’t really fit into. In school this week we sat down and just listened to stories of not just the march but a Ted Radio Hour titled The Art of Listening. Hearing the stories of people and how they listen and understand the world I finally realized the message I wanted to send. What drives me crazy when I see some of the action and reactions of the most recent events is something that would drive me crazy regardless of who was sworn into office. It is the people and their lack of ability to actually listen, understand, and reflect. When we lose all ability to do these things we enter the state of chaos we are currently in.

In a world where we have everything literally in the palm of our hand we seem to have lost all ability to understand people. The second something happens in the news we have all become quick to attack each other to have the upper hand. The minute a friend, family member, or anyone you know says something that we don’t like we just shut down all sense of rationalization and break out into complete madness and begin to abandon the morals and the people that were once so important to us. It is so bad that is spills over into violence and destruction of property. Does any of this sound normal to anyone? Am I alone in realizing that we have all become so impulsive that we just don’t even try to understand one another?

I will admit to everyone now that I do not have all the facts and I probably never will. Or maybe I do have the facts but all other opposing views will tell me that I’m wrong. What I am more willing to do is hear everyone out. Before I can give my point of view to the full extent it would be best for me to listen to the other opinions as well. What we need to do is to start reflecting on what people say before we jump to conclusion. Reflection, otherwise known as thinking, is probably the most beneficial part of listening. If we don’t take the time to think then we can’t open ourselves up to the idea of working together.

Teamwork makes the dream work, supposedly. Other marches and protests in the past have proved this to be true. The Women’s March was supposed to prove that. Instead, everyone blew up the internet and continued the downward spiral of hatred we might never get off of. Maybe if we took the time to understand and reflect there might be just a little less hatred out there. It is the most unrealistic thing for me to say but I don’t believe I am far off.
Report this Content
This article has not been reviewed by Odyssey HQ and solely reflects the ideas and opinions of the creator.