Liberal Media Bias Is Too Real

A real look at the biased media.

In today's world, almost everyone wants to share their own opinions resulting in bias everywhere. Bias especially exists in the United States media. Journalists often lean left on the political spectrum, which skews their reports. As shown in Figure 1 from Media Research Center (2013), three of the largest polling and research companies (Pew Research Center, Rasmussen Reports, and Gallup Inc.) found much of the public sees the media as left-biased. So how did this happen? 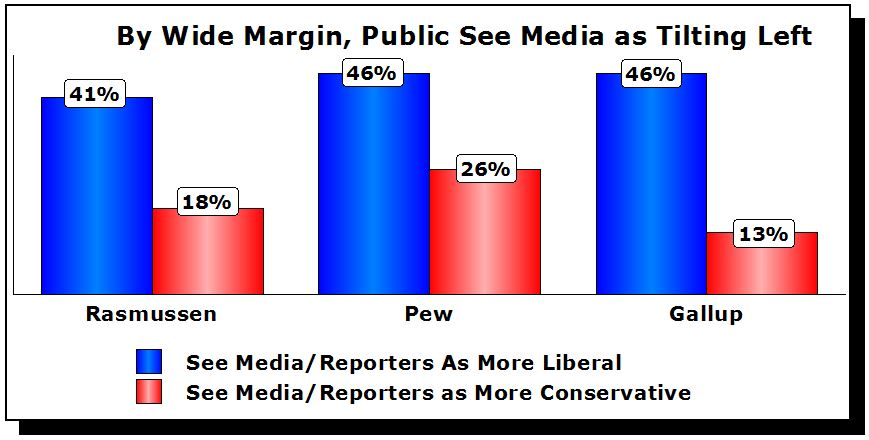 Today, there are way more liberal than conservative journalists in the media, which leans the news left. A 2014 survey conducted by Lars Wilnat and David H. Weaver at the Bloomington, IN: School of Journalism at Indiana University discovered 28% of the 1080 reporters surveyed identified as Democrat and 7% identified as Republican. (p. 12). Although this study claims most reporters are moderate, executive editor of NewsBusters Tim Graham explains, "Journalists have gotten incredibly reluctant to identify with a party. I suspect liberals check the 'independent' box to avoid being properly identified" (as qtd in Wemple, 2017, para. 8). Graham's statement reveals liberal percentages could be even higher, further unbalancing the number of liberal and conservative news reporters. Figure 2 from The Washington Post (2017) displays how the many left-journalists compare politically to the entire US adult population. Many US adults identify as either moderates or right leaning, whereas many journalists are moderate or left-leaning. This information proves newsrooms are exceedingly liberally biased compared to the US population and do not represent Americans' beliefs as a whole. When there are more liberal reporters than conservative reporters, the news becomes biased. But how did the media get this way? 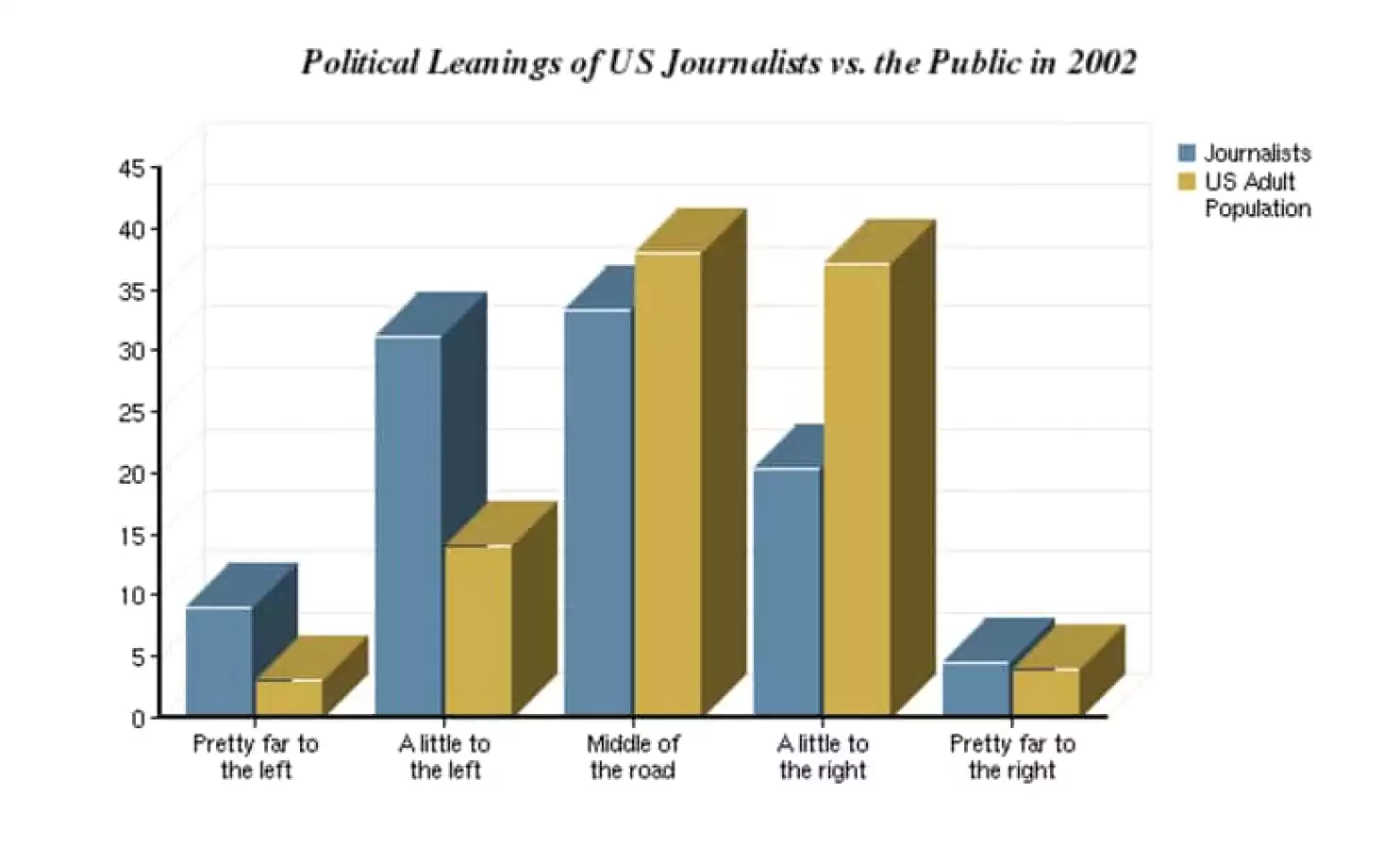 The media is biased because of three main factors: geography, school ties, and journalists' personalities. Geography plays a substantial role in the left-wing media bias. For example, mainstream media's home is in the cities, where liberals tend to live. Figure 3 from The Washington Post (2015) shows the United States' most democratic and conservative cities. The most liberal cities in America including Philadelphia, New York City, and Washington, D.C., are where many of the most popular newspapers are. In July 2004, New York Times Public Editor Daniel Okrent pointed out, "Today, only 50 percent of The Times's readership resides in metropolitan New York, but the paper's heart, mind and habits remain embedded here" (as qtd in Wemple, 2017, para.12). Okrent believes The New York Times's journalists lean more liberal because they are in New York City. They are surrounded by a liberal environment, so their views sway to the left. 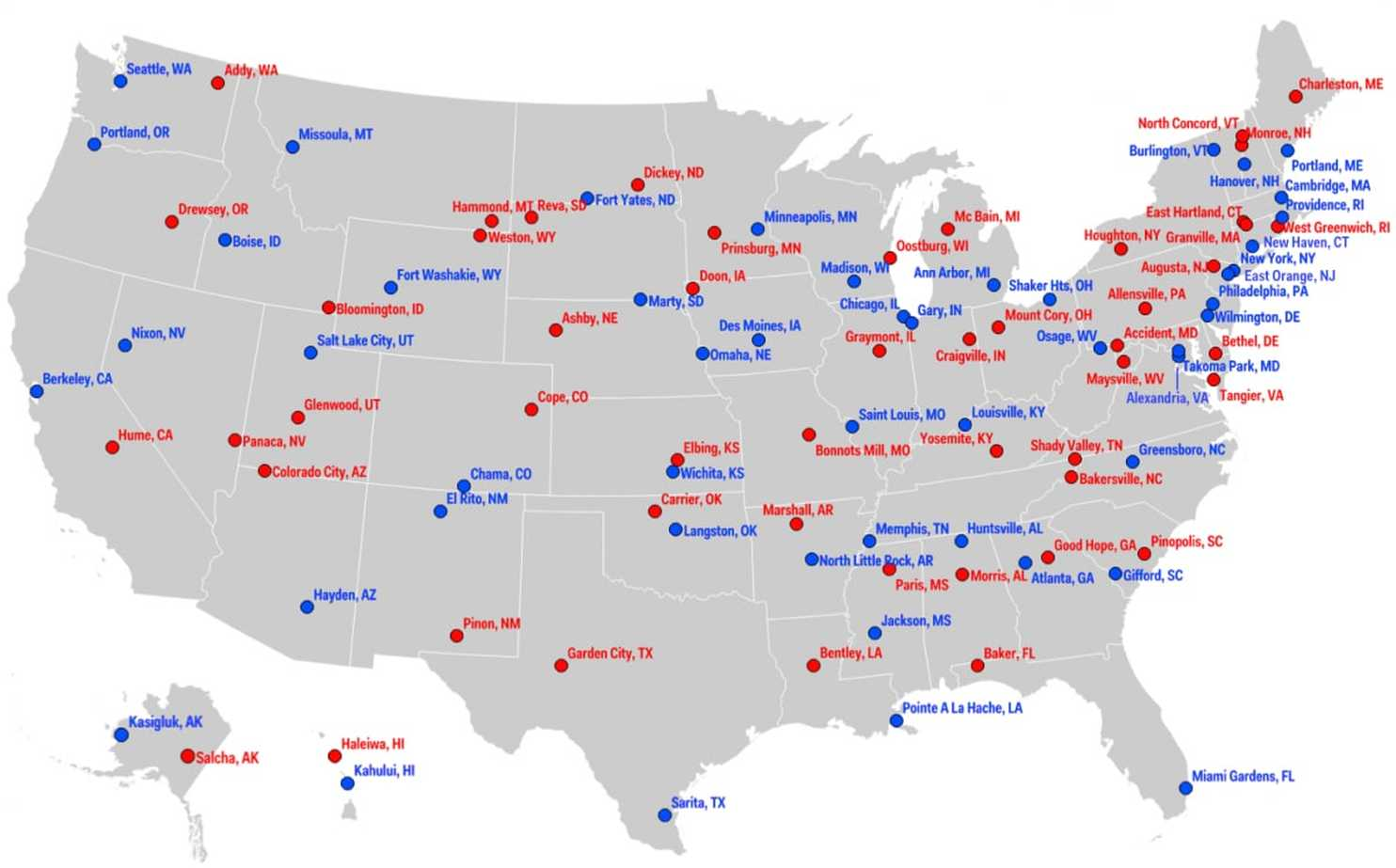 School ties are also a significant reason for liberal media bias. Many news companies hire employees straight out of colleges known for producing liberal students (Wemple, 2017, para. 16 ). When news companies hire many students year after year from the same colleges or regions, the views become biased. For example, if CNN hires three new employees every year all from Harvard, they will all most likely have the same views.

Additionally, left-wing media bias is caused by what the Washington Post (2017) calls the "crusader explanation" (Wemple, para. 14). This refers to how all journalists are drawn to journalism for a certain reason. Deputy Managing Editor of The Washington Post Tracy Grant explains, "I think people are called to this profession sometimes have a sense of mission about shining light in dark places" (as qtd in Wemple, 2017, para. 14). She goes on to claim these people feel certain stories, in which there is always a victim, need to be told, which brings about a liberal "underdog mentality." No matter how the media became crowded with liberals, it needs to change. Even though it is illegal to ask political affiliation when looking to hire, companies should find a way to hire more conservatives to balance out the bias. This could be through indirect questions or even when companies look at potential hirees' social media.

The liberal media bias is especially noticeable in news against current President Donald Trump. Most media outlets constantly ignore any good news he brings and report bad news to convince viewers he is a bad president. For example, in 2018, Student News Daily reported from January 1, 2017 to January 26, 2018 major news stations failed to report Dow record closes. (para. 1). Figure 4 from Student News Daily exhibits how ABC World News, CBS Evening News, and NBC Nightly News only reported 20 out of 82 record highs. Even when the records were reported, it was sometimes covered for only a few seconds. Student New Daily (2018) wrote "The Jan. 17, 2018, close above 26,000 got no mention on Nightly News and just 13 seconds on the other two broadcasts" (para. 16). Many media outlets do not want its viewers to believe Trump is a good president. Additionally, in a 2014 Fox & Friends interview, Boston Herald Columnist Adriana Cohen explains ABC, NBC, and CBS covered only a small amount of the upcoming midterm elections as compared to 2006. She infers this is because the Republican Party could likely do well in the election. Cohen (2014) reports, "What we're seeing today is severe media bias. The major media outlets should be giving the American people the truth and they should be delivering objective journalism, but unfortunately too often they're acting like private PR firms for the Democratic Party." Cohen (2014) also explains when there is bad news for Republicans, ABC, NBC, and CBS make sure to cover it, but when there is good news like the Dow records above, they do not. These are only two of the examples of liberal bias in the news, and unfortunately, there are many more. To see more examples of recent liberal media bias click here. 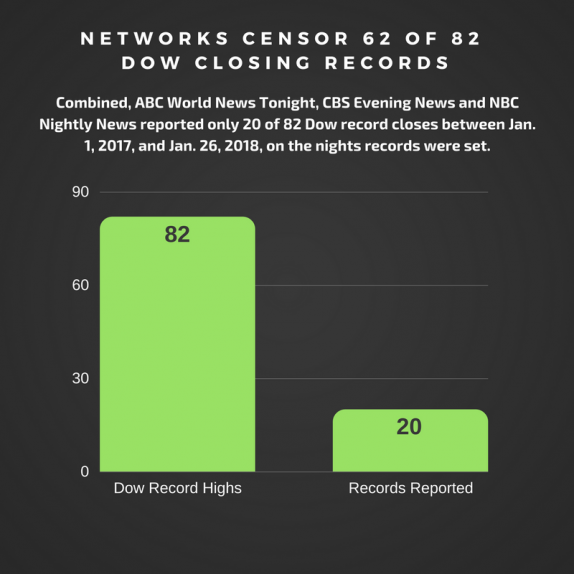 All in all, liberal media bias is real, and if people want to be able to rely on their news sources and know what is truly happening in the world, they need to start speaking out more about liberal media bias. The more aware people become of this situation, the less power the media has. If we continue to let left-leaning media blind us, we will grow ignorant, which will doom us all. As Martin Luther King Jr. said in his book Strength to Love (1963), "Nothing in all the world is more dangerous than sincere ignorance and conscientious stupidity."