(That don't involve excessive amounts of crying or caffeine.) 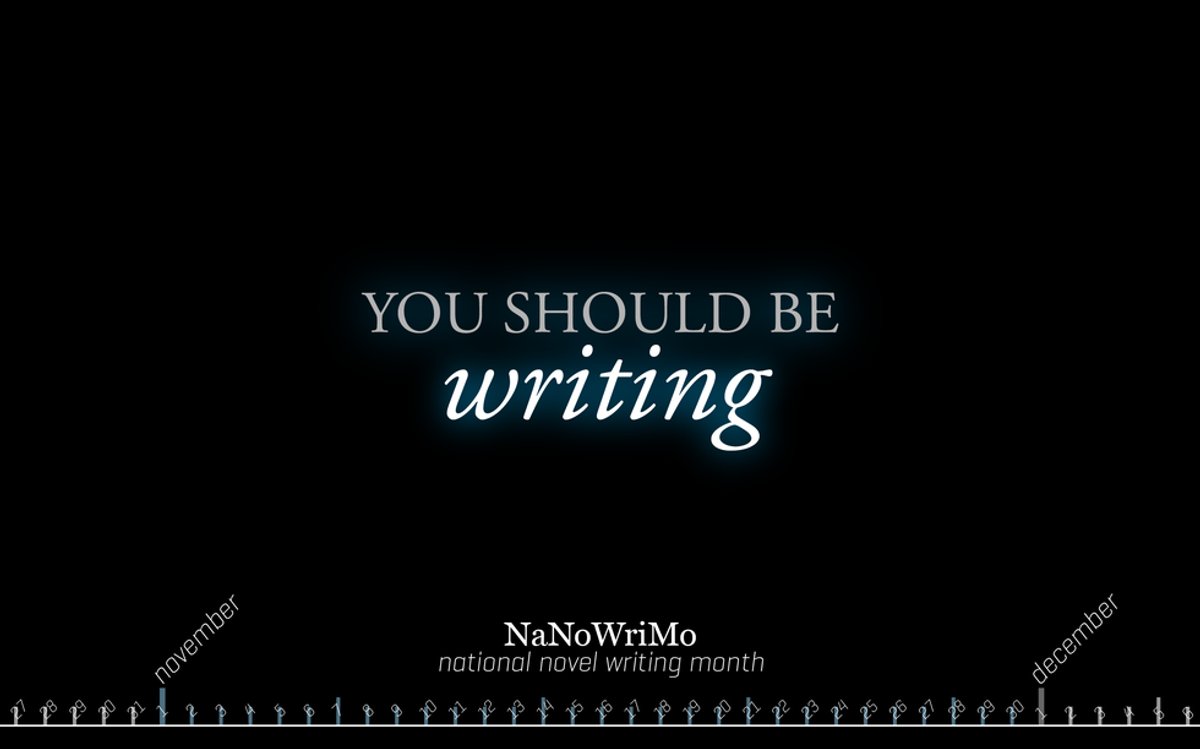 I was tempted to write a thinkpiece about the election, but decided against it. Not only am I unable to say anything political publically without falling back on bad jokes, but I also recently made a major achievement in another part of my life: NaNoWriMo.

For those who don't know, NaNoWriMo (short for National Novel Writing Month) is a program in which people vow to write a novel, or 50,000 words, in a month. It's a very individualistic process-there's no certain kind of novel that you have to write or program that you have to use-but there's still a fantastic community full of supportive writers. Everyone else doing NaNoWriMo is more than willing offer you advice about how to get those words out, but ultimately, it's up to you to write them.

And, so far, I've managed to do that. Despite being having a wildly inconsistent writing schedule, I've somehow managed to pound out 19,744 words (at the time this article was written), and that number keeps growing. I'm on target to finish by the end of November (a few days beforehand, even), and I'm racking up the badges-awards they give you for continuing to write and update. As someone who's attempted to do NaNoWriMo four times and maxed out at 6,000 words, this is a miraculous achievement.

But this hasn't been an easy task. And I've learned a lot this year about NaNoWriMo and simply writing a book. Below are the four most important things I've learned about writing a novel in a month.

Cramming 50,000 words of anything into one month is a hard task, let alone a novel. They say the daily goal to hit is 1,667 words, which isn't so much, but I have a hard time fitting it in. It feels like work at times, and you know what I do with work-I procrastinate it.

I wouldn't say that the actual writing is hard. When you have ideas, the words will flow onto the page effortlessly, and it's hard to make yourself stop. But if you don't have ideas, it's tempting to bang your hands on the keyboard repeatedly until you hit 1,667 words.

2) If you're a perfectionist, it's doubly hard.

And anyone who knows me will tell you I'm not a perfectionist, but when it comes to my writing, I am. I'm hypersensitive about everything I put on the page, and the minute I start rereading, it's all over. I start editing what I've already written and I'm unable to move forward.

One of the biggest problems that people have while undertaking NaNoWriMo is that they know that they're writing utter garbage and have to resist the urge to either edit it, start over, or dump it in the trash. That was my fatal mistake back in 2014, when I decided that I hated one of my characters-who, unfortunately, was a narrator. After starting over, I officially gave up on the project a few days in. I'm not making that mistake this time.

3. What you're writing will be awful.

Unless you're a prodigy that can write masterpieces in a month, odds are that you're writing a cringe festival. From plot holes to character issues to grammatically incorrect sentences, odds are that your book's going to be awful at first glance.

(Also, I've generally found that the "prodigies" in the writing world can usually write a first draft in a number of days or publish their first draft, but not both.)

These days, I've been feeling so satisfied knowing that I've gotten so far in such a short amount of time. And it's not even so much knowing that my book is closer to being done-because it's going to be a while-but that I can start a book and keep writing on it until it's finished (unlike my other book, which I drifted away from after finishing chapter 14). I'm very proud of myself right now for even getting this far, and even if I don't hit 50,000 within the month, I'll know that I can do it if I put my mind to it.