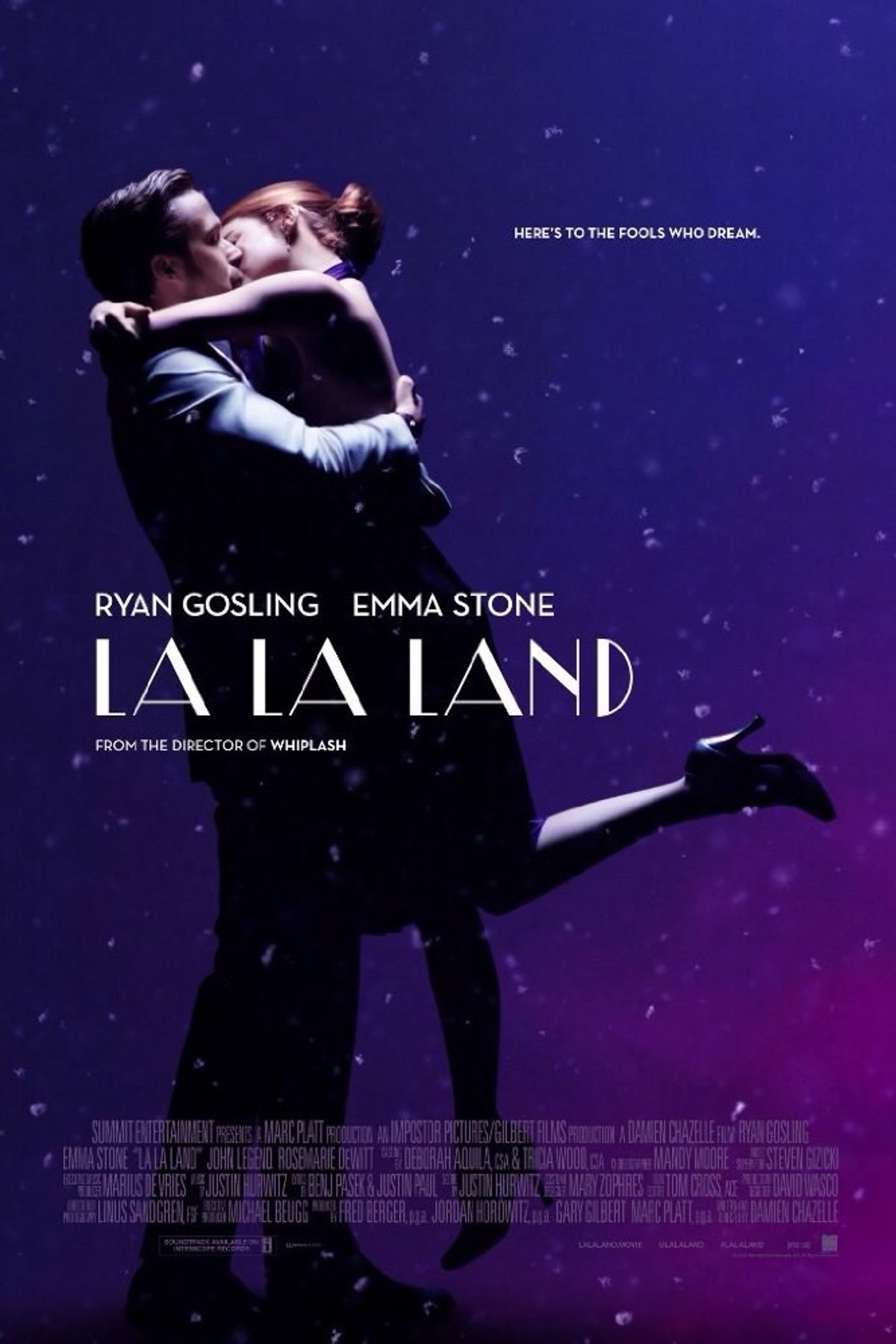 My senior year of high school was the year that I began to really dive deep into the world of film. The 2015 Academy Awards were a big year with hits like "Birdman", "American Sniper", and "Whiplash". The last film snuck in there. "Whiplash" came out of nowhere and surprised many. It did not win the Best Picture, but still a nod to know that it was nominated, especially a movie that was the directorial debut for Damien Chazelle. I watched "Whiplash" and was surprised that I had not heard much about the Chazelle, given that he also wrote the screenplay. "La La Land", or let's say La La for short, was also written and directed by Chazelle. I know La La came out back in December, but given that it is in a three-way tie with "Titanic" and "All About Eve" for Oscar nominations, 14 to be exact, now is as good a time as ever. You can check out each nomination for "La La Land" here.

First, let's begin with the story and structure of the film. An aspiring actress begins to run into a jazz pianist, repeatedly. They begin to talk and eventually realize they like each other. I am not a fan of romantic movies or musicals, and La La is both of these. The first half of the film is very musically driven. Many random breakouts of song and dance, but the choreography is good, and the music is actually better. My biggest problem with musicals is that they do not have music that is well written, it's catchy and theme songy sure, but not amazing. However, La La provides beautifully composed songs that had me wanting to listen again on the drive home from the theater. The second half is steps away from the dancing and looks more into the relationship of the two main characters. I was glad for this because it was no longer just a musical, but turned into an emotional love story.

There are only two recurring characters in the entire film. John Legend plays the 2nd most seen character, and even then it's only for like 10 minutes out of a two-hour movie. Ryan Gosling, who I absolutely love, plays the pianist, and Emma Stone plays the actress. Just an outstanding job was done by both of these very talented performers, who actually were both nominated for an Oscar. Gosling and Stone danced and sang their own parts in La La. I can usually spot when the notes are different from the person singing, or the rhythm played from an instrument does not match with what is playing, but this movie did a very good job at having the music align with the actors and actresses. Gosling also actually played the piano for most of the movie, which is impressive. Just another reason to love the man.

Finally, the shots and a director. Damien Chazelle tackled the challenge of trying to create an original romantic musical, and he wiped the floor with the challenge. One of the first things that I immediately identified were the colors of the film. Each scene had such vibrant glows that they jumped off the screen. Even observing the lighting, certain hues had effects in certain settings. And the scenery, simply alluring. There was a distinct panoramic shot with the two characters leaving the back of a jazz club, walking into an alley. The lighting, along with colorway of the neon sign, in this particular shot was magnificent. Another sequence I really admired was the directors spinning the camera back in forth between two different things happening in a nightclub. This scene took place in only a few shots of the director snapping the camera to and from. Chazelle has yet to disappoint me on directing or writing. I have not been able to find a problem with either of his movies, yet. I cannot wait to see what he has in store for the future.

Every once in a while, a perfect film comes along and blows me away. "La La Land" is my favorite film of 2016. I truly loved everything about this movie. The ending was my favorite part, by far. The emotion surrounding the climax was quite palpable. La La is special to me, this film allowed me to be more open to the romantic genre, along with musicals."La La Land" is now the 18th movie I have given a perfect, 10 out of 10.

Caitlin Marie Grimes
University of South Florida
9986
Beyond The States