A brief discussion of Kwanzaa 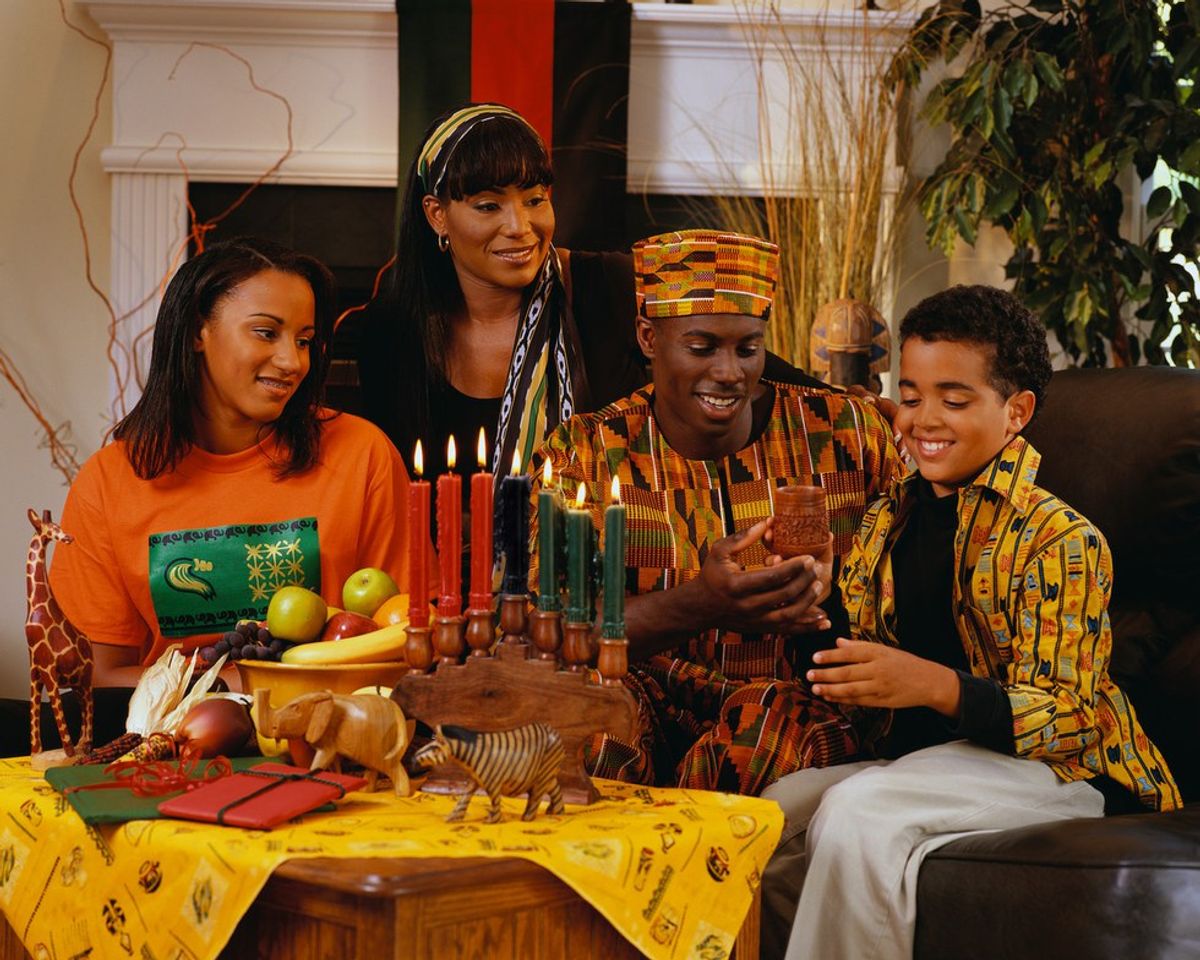 When I was younger, I used to attend a performing arts institute in Hartford, CT. The institute was called the Artists Collective and was devoted to preserving the culture of the African Diaspora by teaching young children of any race about the heritage of African peoples. I can remember vividly the days when Mama Cheryl (Cheryl Smith to the adults) would stand in front of us students, dressed in her kente cloths, afro picked out into a salt and pepper cloud, and review the Nguzo Saba (the seven principles of Kwanzaa). At the time, the tenets meant very little to me. She spoke the words in Swahili, and I recited them back to her, but all that mattered to me was how long until I could make jewelry with Mrs. Jackie or play the steel pans with Curtis, the cursing Trinidadian music instructor. I did not care how the concepts of Umoja (Unity) or Kujichagulia (Self-Determination) would later affect my life. I was ten years old, and as hard as they tried to make it mean something to me, my blackness wasn't even a thought in my head.

Now, at 21, I have decided to celebrate Kwanzaa for the first time. The decision to do so came from the most unexpected of places : Facebook. One day I was scrolling through my feed and saw a picture explaining the Nguzo Saba. I had almost completely forgotten what they were, but when I read Kujichagulia, I could hear Mama Cheryl's voice behind it, the way she broke up and accented all of the syllables. For a moment, the memory reminded me of something close to home - those mornings when she would would say the words and I would say them back, thoughtlessly, and I felt I had to do it. I had to celebrate this holiday for that woman who taught me for years, whose voice boomed throughout the auditorium even without a microphone, who I could never forget, even if I tried.

The holiday begins on the 26th of December and ends on the 1st of January with a feast and an exchange of gifts. Contrary to popular belief, Kwanzaa is not a religious holiday, and, in fact, the holiday is only 50 years old. It was first celebrated in 1966 by Dr. Maulana Karenga in an effort to build a culture for African Americans and all other displaced peoples ancestrally linked to Africa that looked beyond the legacy of slavery and struggle in the US and around the globe. He felt that those of African descent outside of their ancestral home needed a way to restore their connection to Africa and so designed the holiday to be based off of traditional African harvest celebrations. The name of the holiday is derived from the Swahili phrase “matunda ya kwanza” which means “first fruit”, and is a time of celebration but also a time of remembrance and hope. This is because the Nguzo Saba are communal values meant to strengthen our bonds as a people through its values. The Nguzo Saba can be broken up into two groups, the principles of struggle and the principles of hope. The three principles of struggle are Kujichagulia, Ujima (Collective Work and Responsibility), and Ujamaa (Cooperative Economics, while the principles of hope are Nia (Purpose), Kuumba (Creativity), and Imani (Faith). The final principle, Umoja, is neither centered in struggle or hope, but rather is a representation of the Pan-African people. Umoja is why we struggle, why we hope.

At first, when reading about Kwanzaa, I did not understand why Dr. Maulana Karenga believed African Americans needed a holiday all their own or why it had to be based off of traditional African values, but after some thought, it made sense to me. You see, it's because we have been displaced. In America, our only heritage is struggle, pain, and indignity. Even as we make strides forward, our history here is not something to build a culture off of because it, with nothing else to look back on in American history, must be a culture of struggle, pain, and victimization. Karenga, in establishing a holiday that has us look farther back, all the way back, to what was our first home, encourages us to recognize that there is more to the world than European influence, that as people of African descent we have a rich cultural history to tap into and be influenced by. The principle of Nia (Purpose), a principle of hope, is devoted to developing our community so that, one day, we can become a great people, a united people. The principle of Kujichagulia (Self-Determination), a principle of struggle, is the acknowledgment that we can define ourselves, name ourselves, speak for ourselves, and create/recreate for ourselves. In my opinion, these two principles, aside from Umoja, are the two most important because Nia states that we as a people should always be working towards improving our communities and ourselves so that one day there can be no doubt in our collective value, and Kujichagulia states that we can be and do as we please, that we determine ourselves and that no outside force can take away from us our identities our give us new ones. Both of these principles look to the past, present, and future and demand that we as a people do define ourselves and, through that self-definition, work to better ourselves on the whole.