What 'The Legend Of Korra' Taught Us About Love
Odyssey
CurrentlySwoonLifestyleHealth & WellnessStudent LifeContent InspirationEntertainmentPolitics and ActivismSportsAdulting
About usAdvertiseTermsPrivacyDMCAContact us
® 2023 ODYSSEY
Welcome back
Sign in to comment to your favorite stories, participate in your community and interact with your friends
or
LOG IN WITH FACEBOOK
No account? Create one
Start writing a post
Entertainment

What 'The Legend Of Korra' Taught Us About Love

They showed their viewers uncomfortably authentic aspects of love. 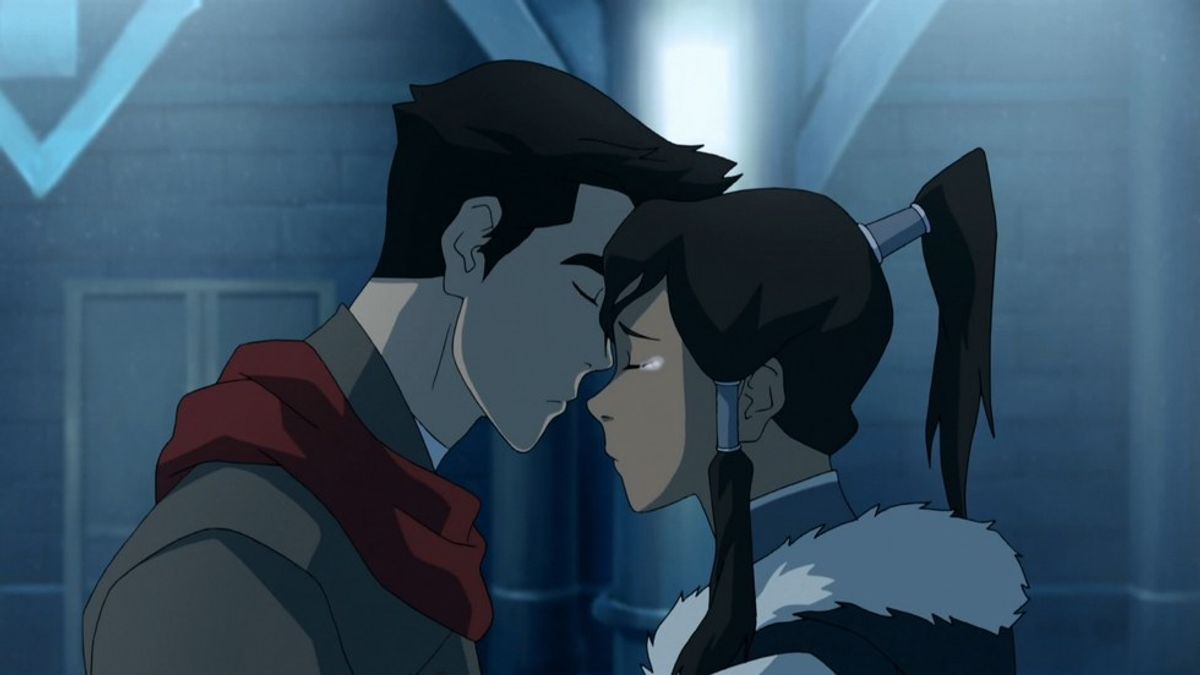 Revisiting Book two with my older sister and accompanying my roommate for her first viewing of the series, "The Legend of Korra" manages to remain relevant in my life, along with its predecessor, "Avatar: The Last Airbender." While I never shipped Mako and Korra together (nor them with anyone else -- sorry, Korrasami and Masami fans), seeing their relationship unravel managed to make me reflect on love and relationships, and continue to look on with amazement on how the show managed to, once again, evoke compelling insights about life.

Usually the themes of "LoK" picking at fans' brains were the complicated politics and philosophies of each book, such as the Red Lotus and their appeal to anarchism in Book Three. Relationships in television are too easily dismissed since they are an ordinary aspect of life, and often not an original addition to storylines. Because of that, viewers will turn away from the deeper meanings of any show's analysis of love. While much attention has been (understandably and deservedly) given to the canon pairing at the series finale, the romance between Korra and Mako shows something just as meaningful, especially in Book Two.

Because of the ultimate breakup between the two, the show manages to separate itself from most cartoons, including "A:TLA" where the main characters are constantly happy in their relationship, easily make up after a big fight (of which there only tends to be a single one), stay with their original partner, and ultimately marry them. Neither are they Ross and Rachel types ("Friends"), who constantly bicker and break up, but choose to be with each other in the end. Mako and Korra showed us that relationships are complicated, and most importantly, rarely end up the way we want them to.

A lot of us fans, including myself, did not want them together since they first kissed when he was still with Asami, and managed to keep it a secret for a long time. Mako's secrecy around Asami showcased that he was not great boyfriend material. He was also unreasonably mean to Korra when they first met, foreshadowing future tension in their romantic relationship. We watched as Korra and Mako struggled with understanding each other while they dated. Much confusion arose when he did not know whether she wanted him to listen or give advice, and her anger flared up when she accused him of taking sides regarding her arguments with other people. These seemingly small, yet repetitive, misunderstandings were the embodiment of a much bigger problem: their lack of compatibility.

Watching Mako struggle as he chose Korra over Asami (again) made it clear, if it wasn't already, that the relationship could not work. With Korra having her recent memories wiped clean, including of the breakup, we have sympathy for Mako wanting to rekindle the flame. He shouldn't have led Korra on, nor should he have betrayed Asami, but he wanted to salvage the good times and feelings they had. Despite the hard work they put into their relationship, it wasn't enough to make them happy together, and they had to come to terms with the fact that their relationship was something that wasn't meant to last.

This is part of what makes the show and its situations touching. We may not agree with characters' choices, or even like the characters themselves, but what they go though is an accurate portrayal of what we and the people around us have gone through with love. Love may be shared between two people, but the practicality and the ultimate satisfaction of the relationship will often outweigh the tender feelings and bursts of passion.

Korra and Mako, the original couple of the series, showed us these uncomfortably authentic aspects of love. They did not last and not every one of us rooted for them, but the realism reflected in their relationship, as with other aspects of the show, and that's what helped make "The Legend of Korra" a dynamic and unforgettable series.

Nicole Marie Nigro
Individual Creator
2059
c1.staticflickr.com
Where to start...... Let me start with the cliche that life throws us curveballs and what we do with it is what counts.