Is JUULing Safe For Kids? Not So Fast
Odyssey

No, Your Kid Isn't Carrying Around A Flash Drive, It's A JUUL, And Yes, It's Dangerous

Your kid is carrying around a JUUL, not a flashdrive. 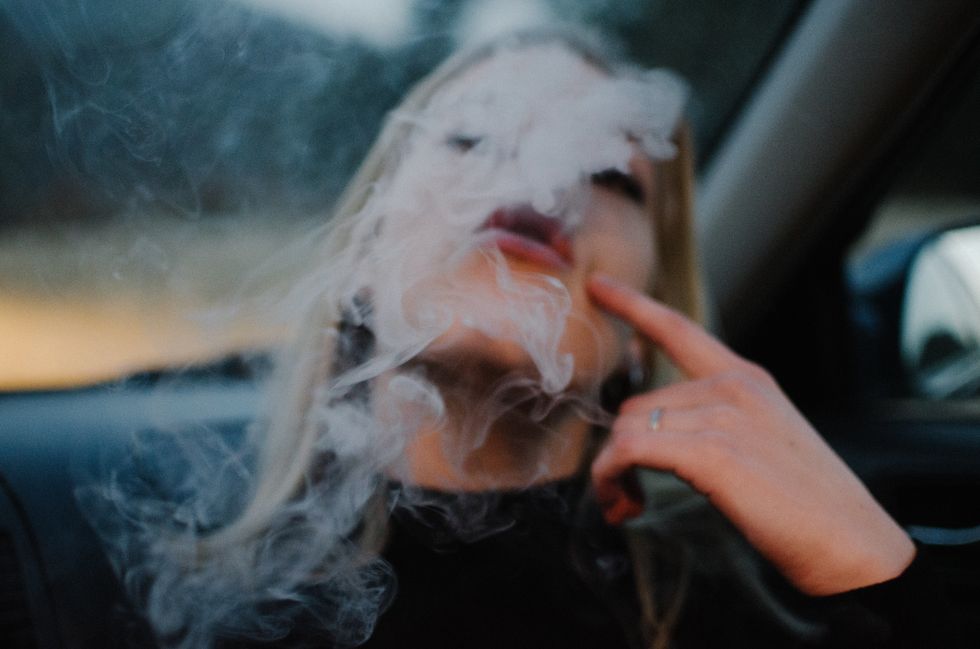 "Do you want a hit?" The young man asked with raised eyebrows and his arm extended, offering what appeared to be a flash drive. His friend accepted, swiftly grabbing the metal, rectangular device and holding it up to his mouth. He closed his eyes as he took a deep inhale, swelling his lungs up with whatever substances the dark-grey rectangle contained.

He exhaled slowly and opened his eyes. In a trance, he gazed at the creme brûlée flavored clouds as they escaped from his mouth and disintegrated into the room. He resembled a chemical plant making fake clouds. The device was not a flash drive at all. It was a JUUL.

With one hand wrapped around a red solo cup, and the other gripping a JUUL, 12 of the 26 college students at the party paraded around their flash drive imposters. The sleek device was the life of the party as its owners generously passed them around to the party guests. There was never a cloudless minute.

People playfully blew vapor clouds at each other faces. Boys tapped the ends of their JUULS together, making a "cheers" motion. Another student aggressively dug into his pockets looking for a portable charger. The light on the front of his JUUL twinkled red, alerting its low battery life. He had no shame in taking better care of his JUUL than he did himself.

Small enough to fit in a closed hand, JUULS are the latest social trend growing among teens and young adults. The new e-cigarette was created as a method to draw smokers away from their health-wrecking habit but is now doing just the opposite, according to the New York Times. JUULs are the new gateway device for smoking.

The co-founders of JUUL, James Monsees and Adam Bowen, claim that the device is an alternative to cigarettes, meant to eliminate the use of cigarettes. Their site explicitly states that it is not their intention to attract the youth or non-smokers. With the use of a Youth Prevention team, JUUL strives to market their products strictly to adult smokers and not the youth audience. These efforts are ineffective.

Since there is little knowledge of the health risks associated with JUULs, users are practically the device's genuine pigs, and they seem to be fine with that. The only conclusive data on e-cigarettes is that they are healthier than smoking regular cigarettes, but the long-term effects remain unclear, stated The Atlantic.

The fear of the unknown does not cause users to flinch. But why? E-cigarettes were introduced to America in 2007, but seemed to do more good than harm, according to the Consumer Advocates for Smoke-Free Alternatives Association. So what is it about JUULs that attracted the youth's attention?

Gregory Williams, a student at Louisiana State University, claims a critical factor separating JUULs from other forms of e-cigarettes, like vape pens, are the social stigmas rooted with each. People who used bulky vapes are stereotyped as "losers" and are associated with a trashy crowd, he said. Using a vape that produces such an obnoxious amount of vapor is equivalent to wearing a target on your back. People become jokes once they are caught with a "brick-sized" vape in their hand. The JUUL's discrete size and smaller clouds do not give off the "trying to look cool vibe" that vapes do, he said.

The higher cost in vapes is also a reason younger people are more attracted to JUULs. Searching the site "vaping.com," Gregory clicked on a "decent vape" priced at $59.95. Then pulled up the JUUL website, revealing the petite device listed at $34.99. The company's site also offers a courteous 15 percent discount on any purchases with the user's subscription.

Before purchasing his first JUUL, Gregory rarely ever picked up a vape and never touched a cigarette, but now he depends on nicotine. Making sure his JUUL is charging before going to bed each night, is a necessary part of his nightly routine. Unaware of the health effects, Gregory continues to JUUL roughly six hours a day.

Not only are universities infected with the JUULing fad, but so are high schools and middle schools. A high school junior, Amanda Seinfeld, admits to owing her own JUUL. As smokers, the 16-year-old's parents are "perfectly OK" with her JUULing habits as long as she promises to never smoke cigarettes.

At school, it is normal to JUUL in the bathroom, locker room and even classroom closets, she said while fidgeting with her baby-blue JUUL. The new trend offers Amanda and her fellow classmates a morning ritual that helps them "get through the day." Before the first bell, the friends pile into a car to hit their JUULs, as if nicotine served as their morning cup of coffee.

All electronic cigarettes are battery-powered devices that convert e-liquid into vapor. JUUL's popularity deems it 54 percent of the e-cigarette market as of March 2018, according to TIME Health. These specific e-cigarettes run on cartridges, popularly referred to as "pods." Each pod carries 0.7mL with a 5 percent dosage of nicotine. One pod equals a pack of cigarettes according to Vaping 360.

The remaining ingredients of the pods are glycerol, propylene glycol, benzoic acid, and flavorings. The JUUL company currently offers eight flavors, the most popular ones being mango, mint, and creme brûlée, according to Vaping 360.

Teenagers and even the older users are unaware of the significant amount of nicotine and health risks they take with each puff, according to the Boston Globe. Medical professionals increased their efforts to warn their patients about the dangers of e-cigarettes, said Steven Ragusa, a doctor at St. Elizabeth Hospital. Though JUUL pods claim to not contain diacetyl, the potent chemical that causes a chronic disease called Popcorn lung, 75 percent of other e-liquids do, according to the Electronic Cigarettes Association. Popcorn Lung is an irreversible and untreatable disease of the lungs, Ragusa said.

This toxic chemical is most potent in flavors potentially marketed to young adults and children, according to The Atlantic. This includes flavors like vanilla custard, rainbow candy, and bubble gum. These flavors are usually approved by the FDA while in the liquid form but have never been tested once heated up, according to a study by Penn State's College of Medicine.

What Ragusa finds most concerning about JUULs is its intense levels of nicotine. The younger generations that are excessively stimulating their brain with these devices are disrupting their chemical balance and affecting their brains growth, Ragusa said.

Users who are less oblivious to the dangerous chemicals they inhale think they can cheat the potential harms of JUULing.

Thomas Middleton, an LSU junior, believes he can habitually JUUL and remain physically unscathed by the device, as long as he does not inhale the vapor. Demonstrating his technique, he held the dark-grey JUUL to his mouth and took a deep breath with a quick exhale following after. Realizing his own ridiculousness, he admitted to owning the device only because he discovered four JUULs in his couch cushions after a party one night. Once he sold three of the JUULs, he decided to keep one for himself.

Thomas claims he only JUULs for the social aspect associated with it, and gratification of watching the clouds exit his mouth. He is convinced this qualifies as a loophole from the nicotine's addictive clutches. This can not be proven. Until there are more studies on the health risk of JUULing, today's youth continues to risk their health and waste their money for a slight buzz that only leaves them craving more.

drugs
Report this Content
This article has not been reviewed by Odyssey HQ and solely reflects the ideas and opinions of the creator.