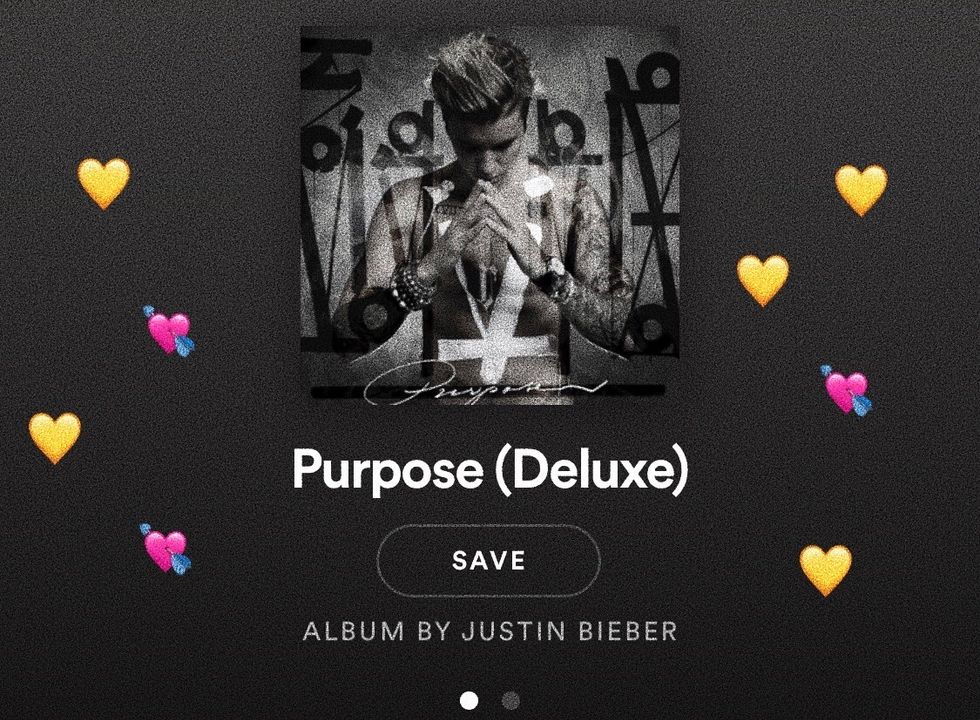 After a rough few years filled with DUI's and vandalism charges, Purpose was the album singer and songwriter Justin Bieber had to make. The artist, who possesses one of the largest fan bases in the world, released an album in November 2015 with something to prove. Now, three years later, I still listen to all the songs on the album, and honestly, you should too. The album itself was both an apology and a warning for fans to look out for the new and improved Bieber. With a sound that exemplifies his descent from teen pop, this album turns skeptics into born-again Beliebers.

Purpose is the fourth studio album from Bieber, and in order for it to work, he needed to come off as humble, repentant and grown up. And truthfully, he did. On the ballad "I'll Show You", Bieber pleads the lyrics, "I'm not made out of steel/ Don't forget that I'm human, forget that I'm real " speaking to haters who forget that even celebrities make mistakes. This theme of forgiveness makes its way through a few of the tracks on the album with Bieber admitting that he's "made a few mistakes" on the R&B tune "No Pressure" featuring rapper Big Sean. As a celebrity, every move you make is always criticized in the public eye. Not even five minutes into Purpose, Bieber states "My life is a movie and everyone's watching". Bieber did a great job of dealing with his past criticism by releasing this album.

Starting his career at an early age, Bieber grew up in the limelight. He had to endure puberty while maintaining a career and trying to change his sound. Now, at the age of 24, he is no longer a teenager. Many were skeptical of how Bieber could escape the teen-pop sound and produce a more mature vibe. But with blends of R&B, hip-hop, and dance beats, plus Bieber's lush and smooth vocals, growth has clearly been made.

Purpose is the perfect album to listen to on a rainy day or while taking a long car ride to an unknown destination. Bieber's voice doesn't project outward, it pulls you in toward him. His natural environment isn't anthemic dance-pop, but smooth R&B. His best singles blend drama with intimacy and make you feel good inside. Slow jams such as "Trust" and "No Pressure" are sure to make you swoon. Not only does Bieber address his past mistakes, but he also sings about love and his new found spirituality.

Purpose is hands down Bieber's best work yet. He is a reminder that we are all human, and that we should not be so quick to judge when we do something wrong.

Even though this album came out three years ago, the bops on this piece of art deserve to be played for years to come. The life lessons embedded in his lyrics are something everyone needs to hear. Thank you, Justin, for giving us this amazing album.