Joining A Panhellenic Sorority As A Woman Of Color
Odyssey

Joining A Panhellenic Sorority As A Woman Of Color

It didn't matter that I looked different than everyone else, it mattered that I was me. 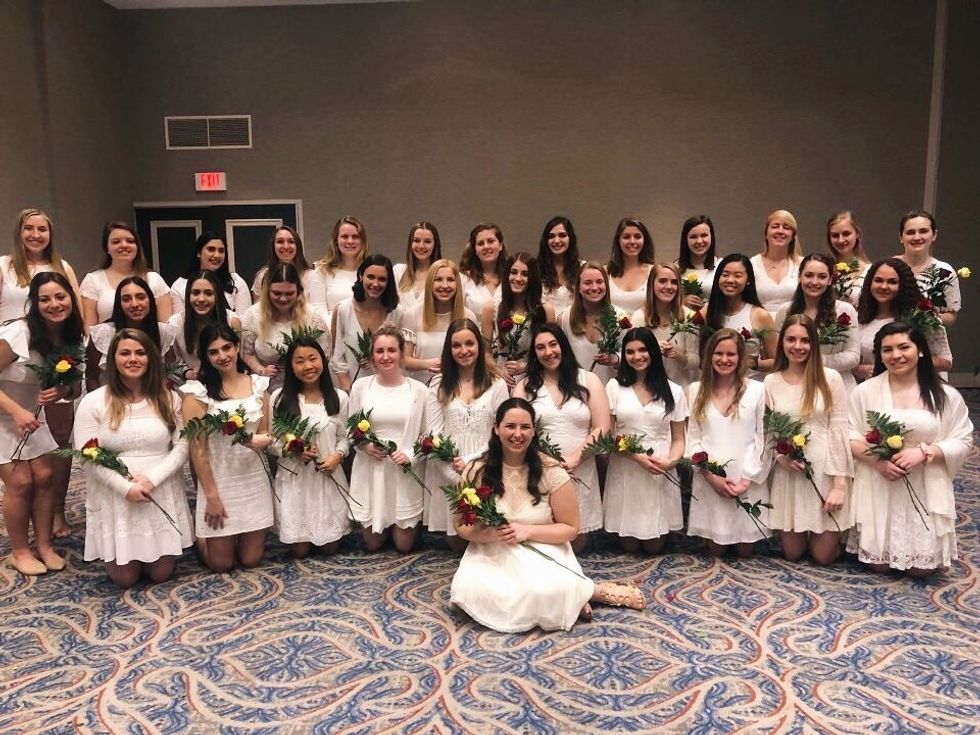 A part of me always wanted to be part of a sorority. Not because of the superficial part of it—like the parties and the formals—but because of feeling like you "belonged." When I was in high school, I saw pictures of girls who had graduated from my high school and were in sororities at their respective colleges, and I couldn't help but want to be part of it. They looked so happy in their pictures with their "families" and with their sorority sisters. I couldn't help but notice, however, that almost no people of color were in those pictures.

I grew up in a predominantly white community and attended a predominantly white school district, so going to school at Villanova wasn't much of an adjustment in that aspect. In the fall semester, I met my three best friends, one of whom was one of my roommates, and we four became inseparable. We spent every day together, from eating meals to doing homework, but I felt that I needed to expand my circle. I started talking to more people in my learning community, and I joined the all-female women's choir and met some great girls there. However, by the end of the semester, I struggled to find a community where I truly "fit in."

As we were about to leave for winter break, all of the freshman girls on campus were asking each other, "Are you rushing?" I would always respond, "I'm considering it!" I checked out the social media of each of the sororities, and my main concern was that I could count the number of women of color in each sorority on one hand. Because of that, I briefly considered joining a multicultural sorority, but the fact that those sororities were identified by a certain race wasn't ideal for me. As a maker of impulsive decisions, I decided that I would just go through the formal Panhellenic recruitment process and see how it goes. My parents were in full support, but I don't think they really expected me to go through with my decision.

For those of you who don't know how Panhellenic recruitment works at Villanova, it's basically four days of talking to girls in all eight sororities on campus. On the first day, you talk to a few girls from four sororities, and then on the second day, you talk to girls from the other four sororities. After the second day, you rank your top sororities. On the third day, girls can attend up to five chapters' events and rank them, and on the last day, it's narrowed down to two. Throughout the whole process, all of the sororities use a mutual selection process where potential new members and the individual sororities are all making rankings.

I walked in on the first day into the grand ballroom and I probably saw around 10 women of color. I shouldn't have been surprised, but it was crazy to see in person. I brushed it off, and I went into each round as my most authentic self. However, when I was called back to only two chapters on the third day after talking to all of the sororities, I became self-conscious. Was it because of how I dressed? Was it because of how I looked? I reminded myself that these chapters were actually interested in me and that I should make the most of these rounds. They were both chapters that I really wanted to be in, so after this, it was a matter of which one showed more of an interest in me.

On the last day, I was only called back to one chapter, so if I ended up getting a bid from that chapter, it would be no surprise which chapter it would be. In that last round, I had some extremely genuine conversations with girls in the sorority. I talked about the weirdest aspects about myself that I didn't tell girls in any other sorority, and I clicked with pretty much all of the girls I talked to.

When I talked to them, it didn't matter that I looked different than everyone else, it mattered that I was me.

After I received a bid (i.e. an invitation) from that sorority, I was ecstatic. I will admit that I thought I would transform into this new person, but throughout my first weeks in the sorority, I felt like pretty much exactly the same person I was when I came in. And that's one thing I loved about my sorority—the people around me caused me to be the best version of myself, not a new version of myself. It helped that our campus doesn't have university-sponsored houses, because Greek life at schools that do becomes very prevalent and invasive on campus.

I want to make it clear that I'm not saying I've come to neglect my background. I have by no means forgotten about my Asian heritage; my race just isn't something I'm treated differently for. In the cover photo for this article, it's obvious that I'm one of two women of color in my pledge class of 35, but the sense of community I've found trumps the fact that my race is a physical differentiator. An example of this is my sorority "family": me, my big, gbig, and ggbig. It sounds silly to say, but in a normal family, it would turn heads to have one Asian person in a fully Caucasian family, but it makes no difference in this one.

To some, it may seem like I'm making a bigger deal than I should be about being Asian in a Panhellenic sorority, but as a woman of color, race impacts most aspects of my life. In the classroom and in the workplace, we are often the only person who looks like us in the room, and we are treated differently for it. I've been asked by a white teacher in class, "What do you think about this from your experience?" Naturally, being part of the majority, a white person probably wouldn't be asked such a question, but it's important to be empathetic when speaking to people of color.

I can't ensure that all women of color choosing to go through with Panhellenic recruitment will have the same experience I did. For all I know, my success story could have been an exception to what women of color normally experience. I do want to emphasize that the reason I was able to gain so many more great people and experiences in my life was because I took the initial risk—I didn't think about the possible consequences that could result from rushing; I just did it before I could doubt myself. Often, women of color experience imposter syndrome, where we experience self-doubt about our accomplishments, and I didn't want that to impact my ultimate decision to rush.

To my fellow women of color: we are powerful in our own right, and any sorority would be lucky to have our diverse backgrounds and experiences.

And if other friends who are people of color are questioning your decision to rush, it shouldn't matter, because everyone's paths in college are different. At the same time, don't completely immerse yourself into such a "white" community and lose yourself in the process. Find a way to strike the balance between the different groups of people you surround yourself with, and your college experience will be that much more fulfilling.