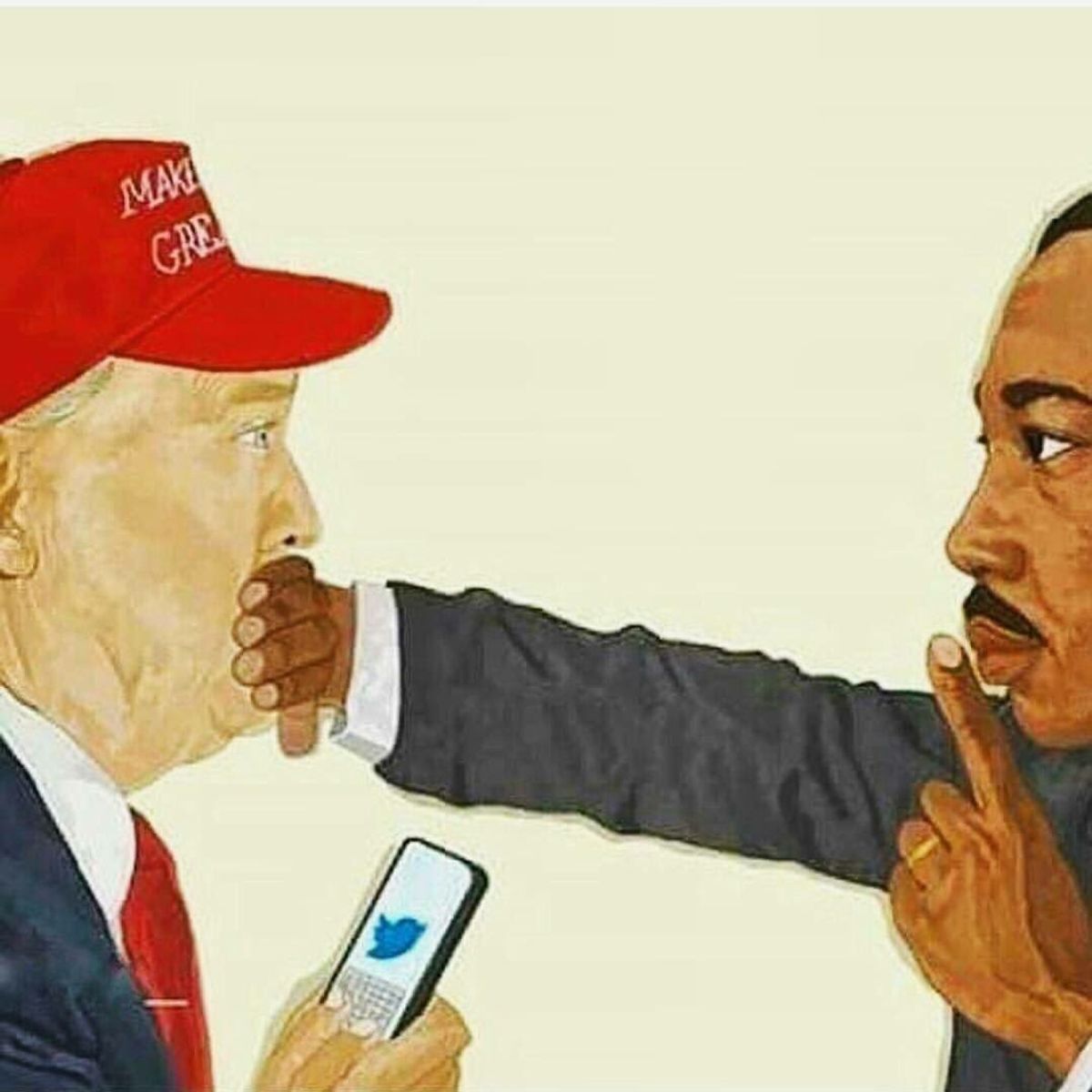 You can look at Mr. Trump's speech addressed to the Boy Scouts of America, or his addressing the violence in Charlottesville, but as an American citizen, I stand by my first impression received when this clown of a businessman, (I repeat not a republican or politician) became the republican candidate running for 2016.

And here are 10 reasons why:

I want to make this absolutely clear, especially to those who might not know Mr. Trump as much as they think they do. Donald Trump is not a republican. He's not even a politician. He is first and foremost: a businessman. Before he entered politics, Donald Trump was a businessman and television personality--producing and hosting The Apprentice. Recall, he's notorious for the line: "You're fired!"

According to the Trump Organization website, Trump started his career as the archetypal businessman--expanding his interests in real estate, sports, and entertainment. He shared an office with his father in Brooklyn and together they made deals for five years.

Recall the quote: "My father gave me a small loan of a million dollars..."

Trump has been reputed to be a deal maker without peer. Like the businessman/movie-maker, Walt Disney, Trump's signature is synonymous with addresses and buildings in New York, such as Trump Tower, Trump Parc, Trump Palace, Trump Plaza, 610 Park Avenue, The Trump World Tower, and Trump Park Avenue.

In short, he's part of the 1% as opposed to the 99% of Americans. That's...that's quite an accomplishment, the scum of America!

Recall, that speech Trump made about addressing white supremacy...

Oh, wait! That's right, 'cause he contradicted it a few days later! Saying there was "blame on both sides". If you're in the least bit surprised by his response emboldening white supremacy...

This is nothing new to the Donald. For Trump, racism for him is as American as apple pie. It's a pattern with him. He's done it throughout the campaign trail, encouraging voters to "beat the crap out of him!", among other things. He's been raised and taught to be a racist, by daddy dearest who, oh, I don't know, got arrested at a Klan riot. Now granted, "the newspaper does not identify him as a Klan member, or clarify whether he was wearing a Klan robe—as were many of the demonstrators―but he did get arrested, and all seven men were represented by the same attorneys". Donald Trump has often expressed his admiration for his father, a father who had power and privilege to shape the boy's assumptions of the world. One can only wonder whether that echoes Mr. Trump's encouragement of violence along the campaign trails, his prejudices against minorities, and his use of violent language.

Trevor Noah pretty much sums this up in the following clip:

"If you've argued with a toddler, you've probably lost that argument." And that's true, you can't win with a toddler. They'll say the most outrageous thing and believe it. Donald Trump has demonstrated toddler-like behavior, throughout the coarse of the campaign. Like Trevor indicated, they love riding cool things, like trucks. Trump's mentality is always, "MeMeMe! MEEE!". As long as the camera flashes on him, he's happy as a pea--cough!--pig in a pod! He's demonstrated the same behavior, when addressing a crowd reserved only at the Boy Scouts of America and when addressing the survivors of Hurricane Harvey, declaring, "What a turnout! What a crowd!"

But Trevor Noah makes a certain point here. The media needs to adapt and treat Trump like the toddler he is. Ask him to elaborate. He is the genius after all.

As you've seen in the clips with him on The Apprentice and as Hillary Clinton announced she had to deal with that creep stalking her, Trump has demonstrated pig-headed behavior towards women. Calling them slobs and pigs.

History will surely note that.

5.) He always contradicts himself.

Ever since the campaign trail, reporters and journalists have become obsessed with fact-checking Mr. Trump's words. And Trump, to an extent, has lashed out and suggested reporters do the same. Trump supporters may argue, but the fact is Trump isn't true to his word.

When he addressed the violence in Charlottesville, Virginia, caused by white supremacists, he started out by condemning the violence and hatred only to later discuss the "alt-left that came charging at the alt-right with clubs in their hands" placing blame on both sides.

Yet again, it becomes a pattern with Donald Trump to go back on his word. No one makes this as perceptible as Stephen Colbert:

We've all heard this time and time again.

This one's so old, it's really laughable at this point. Trump always addresses how the fake news is not covering enough of his story. For example, at the boy scout rally (mind you it was reserved for one audience member only: the boy scouts of America. That's one group), Trump once again accused the media of not presenting a large crowd, despite the camera angling on the children. He again, accused the media of not going to great lengths to cover what happened in Houston, even though, you have CNN posting news coverage of Anderson Cooper in a raincoat, helping the victims of Hurricane Harvey.

Donald Trump claims to be an intelligent man.

I beg to differ!

Please, all you need to do is look at his tweets as well as his speeches. Such as Mr. Trump's series of tweets, claiming Obama had his "wires tapped", all the while misspelling the word "tap".

Remember that speech he made on bringing our troops back home?

Now truth be told, none of our previous presidents have been able to bring our troops back successfully. Even so, Donald Trump thinks he can defeat Isis and terrorists. But the problem is, he doesn't give a constructive plan.

Because as he claims, that's telling the enemy everything we want to do.

Or maybe he doesn't have a plan at all. As l like to quote Hillary Clinton,
"Well, at least I have a plan to fight Isis. You know what else, I'm prepared for. I prepare to be president."

This pretty much ties into reason #3. Trump's mentality is always, "MeMeMe! MEEE!".

Already, he believes his presidency has established a legacy:

The turnout at his inauguration...

The attention hog loves crowds, especially the turn-out that was so happy to see him at Houston, despite the families that lost loved ones, had their world torn apart and are going through some pretty tough times and need all the help they can get. Instead, Trump sees this as something to be looked at in five, ten years from now. Because everything is always about Trump.

Or as I like to call feeding the crowd.

At his rallies and throughout the campaign trail, Trump has feed ignorance to his voters, encouraging supporters to rough up some protesters and news reporters, offering to cover for them. And you would think white supremacists and neo-nazis must've gotten the swastika and "Hail Trump" pose from somewhere?

Last but not least, let's not forget the promise to make America great (oh, and that part about building a wall....yeah, when's that happening again?).

And right now, sweetheart, you're not off to a very good start, with an investigation underway about Russia probing into our election, white supremacists dominating the board again, hurricanes threatening to hit the coasts, threatening to shut the government down if things don't go your way and the possibility of World War III with North Korea.