An Interview With Northern Pinnacle 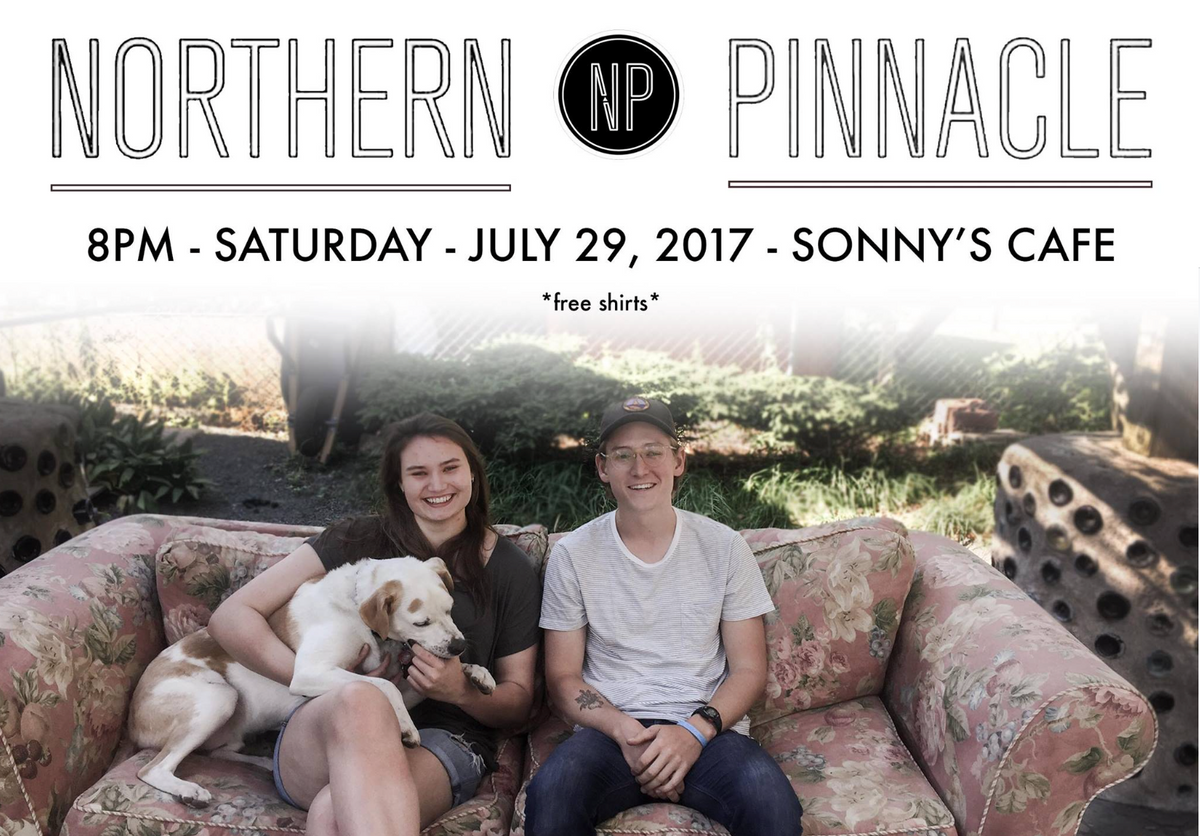 As some of you may know our very own Editor-in-Chief in St. Olaf's chapter of Odyssey, Maddie Thies, is also in a music duo called Northern Pinnacle. This Saturday, July 29th at 8pm, the duo will be performing at Sonny's Café and giving out their awesome free shirts.

Northern Pinnacle began when both Maddie Thies and George Dornbach were both in high school, but the two haven't performed together since then. The night of the 29th will be their comeback concert, and any indie-folk-music lover would be sad to miss it.

The duo started Northern Pinnacle when they met in Seoul South Korea, even though they had only lived six miles from each other for their entire lives growing up in Minnesota. They took a long break from playing and writing together when college happened, but they are thrilled to be back at it, and have assured us that Northern Pinnacle's revival won't be a one time thing. They are back for good!

In case you're dying for more details, I put together a few questions for the duo, and they graciously answered, giving me the scoop on how their unique band came to be.

M: I remember early into high school, I had put out a cover of a Death Cab For Cutie song and George reached out to me, saying we should get together and play sometime. At the time, we weren’t at the same school, but George and his family came that next year- seemed like as soon as we got together and played, it was effortless!

G: One of my friends from Korea had told me Maddie had moved there in the time I was gone in Japan AND that she was a fantastic singer. So I did some good old 21 century facebook stalking and was like, “wow - we should play music together!” I think after the first or second time we played together, we decided we should be in a band. Northern came from our shared living experiences in Minnesota, and Pinnacle was pulled out of the dictionary. Pretty cool.

2. What songs have you enjoyed writing/covering the most?

M: We seem to cover a lot of indie/singer-songwriter/folk types of tunes. I think a lot of it has to do with our small set up; me on bass, George on guitar and both of us singing. Everything else cover wise is much too loud and hard to recreate with just the two of us. Writing wise, very much the same.

G: We wrote the song “Distant Night” about our experience in Mongolia. You can read more about it on our music video description, but we went back my senior year of high school and played the song in Mongolia - the song truly came full circle!

3. How would you describe Northern Pinnacle’s musical style?

M: I would classify us as an indie folk band, with some soft alternative vibes. Of course, in high school, it seemed like my own writing style was very angsty and angry, which seems to have changed drastically now that I am writing again. Just playing over our old material in preparation for this next show definitely had us cringing and laughing in discomfort. I know for sure we will be playing some of our older tunes that we are known for, but I think our style will be a little more upbeat now that we are out of our rebellious stage (sorry about that mom and dad), at least myself anyway!

G: Folky...with an international flare! You can listen to our music and decide for yourself what that means. I often write with my guitar in hand, and I mainly play the acoustic which lends itself well to the indie-folk genre.

4. Is there a particular artist that has inspired your music?

M/G: There isn’t any one artist that has influenced us. We definitely have brought many artists to the table when writing - Eddie Vedder, Iron and Wine, Bears Den, Brandi Carlile, and the like.

5. Why did Northern Pinnacle take such a long break?

M: A big part of it was being busy and being at schools that weren’t exactly close to each other. Another part of it, which neither of us have really talked about, but I needed to figure myself out a little bit. I definitely went through a darker time, which just about anyone close to me can vouch for, and I needed help. I took a break from just about everything I had committed myself to and slowly have found myself treading back to things that really matter in my own life. I am very thankful for the ability to come back to NP.

G: Distance kept NP apart for a year, growing, adapting to college, figuring things out all were a part of it as well. I left my senior year of high school in a tizzy and with it Northern Pinnacle as well. When Maddie came to college in Minnesota, we were both living in the same state, but I think we both were just pursuing different things. People would ask what the status of the band was, and I’d always respond with the number of NP tshirts I still had sitting in my basement. Thanks to puppets and ice cream, and two great friends reconnecting, we’re back! And I’m super duper excited!

6. Can you give us a sneak peak to your set list for the upcoming concert?

M: Some old, some new, some preexisting, free T-shirts, and maybe bubbles??????

7.Where do you hope to go with Northern Pinnacle in the future?

M: We are back! Practicing recently reconfirmed our effortless musical chemistry. Whether or not we are playing as frequently as we would like to, it is so easy for us to jump back into it. As we joked in high school, “No Practice? No Problem. Northern Pinnacle!”

G: I think it’d be lots of fun to go back to Korea and play/write some more music. Do a whole Korea album. For the meantime, I’m just happy to be here, in the moment, with a brand spankin’ new guitar, and my friend. Lots to look forward to!

Northern Pinnacle's comeback concert is something you don't want to miss. Come get ice cream, cool t-shirts, and listen to some chill tunes. What a perfect way to spend a summer night. Hope to see you there!