Does the Hulk SMASH psychological and behavioral norms? 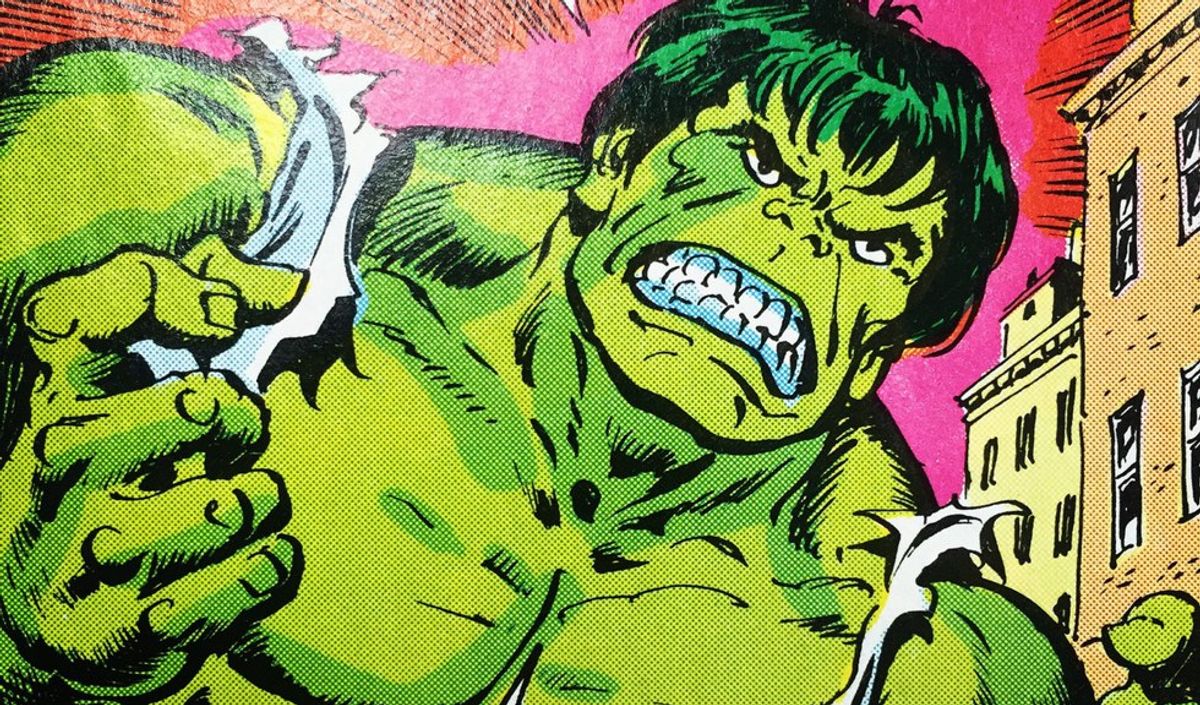 There's no debate over whether superheroes are abnormal. It's part of a superhero’s M.O. to be, well, super and unordinary. Even heroes like Batman and Iron Man who have no special powers, other than the mighty ink strokes in their checkbooks and their high tech super suits, are deviant from the norm in so many ways. Although these super abnormalities, such as Captain America’s super good looks—I mean strength—the Flash’s super speed and Aquaman’s super…uhm...well, whatever Aquaman does, are great benefits to the society these heroes serve, in some cases they are burdens that the hero must struggle with. One of Marvel Comics’ classic figures, the Incredible Hulk, is a prime example of a hero who struggles with his abnormality. But Bruce Banner’s struggle with his super powers may be more relatable to the real world than we might think at first glance. Could Banner’s abnormal behavior and dual personality be a metaphor for Dissociative Identity Disorder?

Dissociative Identity Disorder (DID), formerly known as Multiple Personality Disorder, is an extreme condition in which several separate and distinct identities exist within a single person. An individual with DID may experience anywhere between two to more than 100 fragmented personalities, only one of which being the “host” personality, or the one that identifies with the person’s original birth name and identity. In terms of the Incredible Hulk, Bruce Banner, the timid scientist who transforms into the Hulk, is the host personality. The cause of DID is not completely clear, but it has been correlated with trauma, particularly trauma during childhood. This is in line with the story of Banner’s childhood, as he grew up with an abusive, alcoholic father who took his anger out on Bruce and eventually murdered Bruce’s mother (wow, Marvel, depressing much?).

The DSM-5, which is the psychological “handbook” categorizing and defining criteria for all psychological diagnoses, describes DID through five points of criteria. Let's examine each through the lens of Bruce Banner and his opposite, the Hulk:

The first criterion of diagnoses for DID is that two or more personalities must be present within the individual, each having its own unique way of relating to and thinking about the world and its self. There are two distinct identities within the character of Bruce Banner—Banner and the Hulk. Many superheroes have alter egos and secret identities. Dinah Laurel Lance’s alter ego is the Black Canary, Superman throws on a pair of hipster glasses to become Clark Kent, but the Hulk takes this concept to a unique level. Hulk is not Banner’s alter ego in quite the same way, nor is Banner the Hulk’s secret identity. Rather, the two think of themselves as separate individuals. In the 2012 film "The Avengers," Mark Ruffalo’s portrayal of Bruce Banner makes clear Hulk’s separateness from the scientist, as Banner consistently refers to his counter personality as “the other guy.” Similarly, in the comics, Hulk has spoken of Banner as “that puny weakling in the picture.” Not only do these two personalities think of themselves as separate and individual, they behave as exact opposites. Bruce Banner is socially withdrawn, extremely intelligent and mild-mannered, whereas Hulk is aggressively angry, destructive and his IQ does not match that of Banner’s (OK, yes, in some later comics, the Hulk is an intellectual equal to Banner, but for our purposes, let's stick with the traditional Hulk).

It is true that in some versions of the comic, Banner and the Hulk’s personalities combine and intermix on occasion, and even share some similarities. However, generally speaking, it is clear that Banner and his opposite fulfill the DSM-5’s first requirement for a DID diagnosis.

Secondly, gaps in memory recall, or amnesia, must occur. Traumatic events and personal information may sometimes be impossible to recall, and the host personality is unaware of the actions and behaviors the other identities engage in when they “take over.” After Hulk’s first (frightening) appearance in "The Avengers," Bruce Banner finds himself coming back to consciousness in a random hangar that the Hulk crash landed in. He doesn't remember anything that happened while the Hulk was in control, and Banner even has to ask the guard if he hurt anybody while he was big and green. Banner experiences amnesia when the Hulk personality is the dominant one.

A third criterion for diagnosis is that the disorder causes the individual distress and disrupts the normal functioning of their lives. Bruce Banner shows almost constant concern about turning into “the other guy” and finds himself so anxious about the Hulk that he tends to have difficulty forming relationships. Banner lives a secluded life because of his fear of triggering the brute personality and losing himself to the Hulk. His fragmented personality causes Banner so much despair that he even shows suicidal tendencies, as in "The Avengers," Banner confides to his team of superheroes that he once tried to kill himself, but that the Hulk wouldn’t let him succeed in doing so. Because Hulk is so destructive, dangerous and out of Banner’s control, the fear of triggering the split personality is a deep source of concern and disruption in Banner’s life. In Banner’s case, the DSM-5’s fourth criterion for DID piggybacks off of his distress. That is, the condition must not be a cultural norm. Turning into a big, scary, green monster and destroying everything and everyone in sight isn't very normal. It's socially unacceptable in a big way. If it was normal, it's likely Banner wouldn't be so fearful and nervous. But no matter how you slice it, there's no getting around the fact that killing people and destroying cities just doesn't fly.

The fifth and final criterion makes the clarity of Banner’s diagnosis a little fuzzy: symptoms of the illness cannot be the result of physiological effects of a substance or another medical condition. Banner’s not on drugs and he isn't blacking out because of alcohol abuse, so we can safely say his dual personality is not a result of such things. But he “adopted” the Hulk because of overexposure to gamma radiation. Does that count as a medical condition? I'm not sure. I'm not a doctor, I don't know these things. It is clear, however, that Banner’s fragmented personality is not purely psychological. Everything changes when Hulk shows up to the party and Banner’s body morphs into something entirely different. For this reason, it is debatable that Banner does not fulfill this diagnostic criterion. But given that every individual who suffers from DID is different, and given Banner’s unique circumstances (you know, being a Marvel superhero in a fictional world and all that), I'd say we can overlook this nuance.

Bruce Banner is not a perfect example of an individual with Dissociative Identity Disorder and it would be easy to spend all day debating this hypothetical diagnosis and examining the characters of Banner and the Hulk. But through a quick review of the Hulk’s history in comics and film, along with considering the criteria for a DID diagnosis, it would seem as though the Incredible Hulk is a hopeful and interesting metaphor for this difficult and rare disease.