In The Cards: A Brief History Of Divination And Cartomancy
Odyssey

In The Cards: A Brief History Of Divination And Cartomancy

What's in the cards for you? 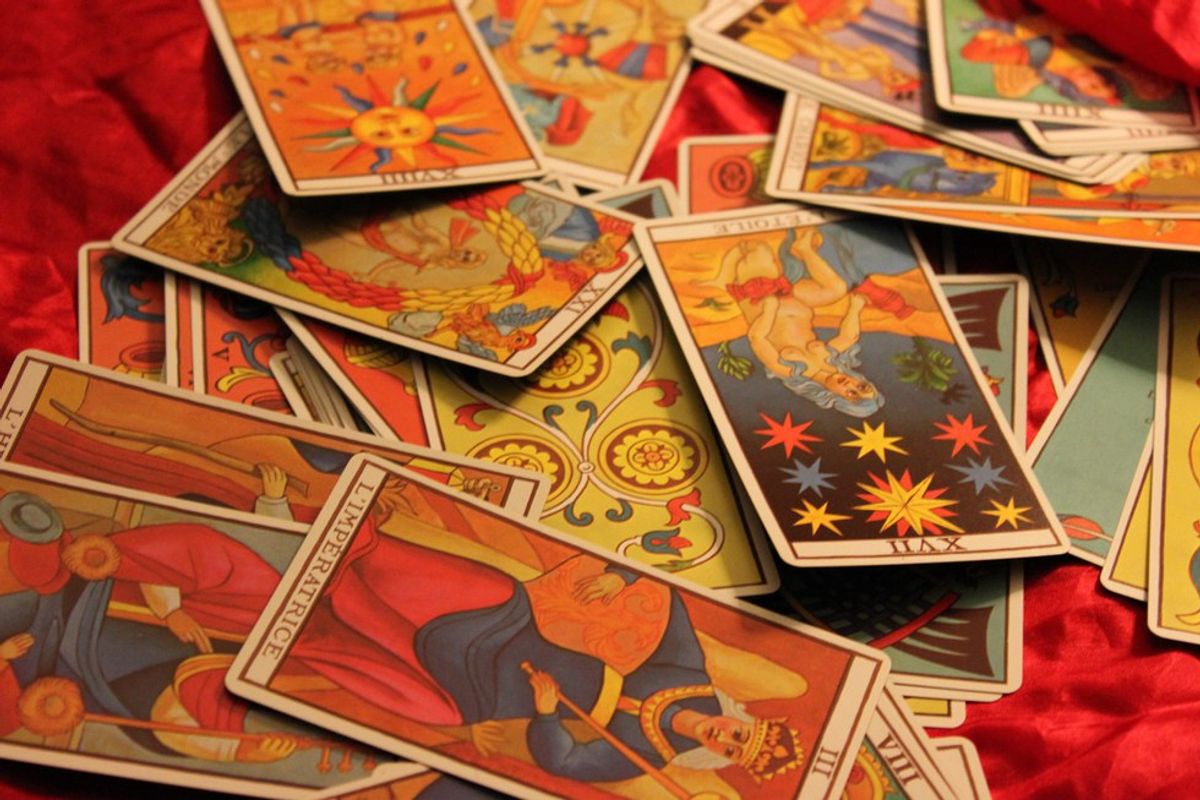 For my recent birthday, I unwrapped several oracle decks as gifts from my mother who knows my interest in divination very well. However, the majority of my friends and relatives are not as big of divination geeks as I am, and when I have my decks out in front of them, the most common question I get asked is, “What do you do with those?” The best way to respond to that question would be to give them a reading and demonstrate, but in most cases, I simply explain their use for giving advice and guidance through interpreting the cards, but that doesn’t really capture the total awesomeness which these divination decks have to offer.

Divination is a wildly misunderstood past time, with many thinking that divining is everything from fake to foolish and, in some case, sinful. As my great aunt so plainly—and somewhat sarcastically—put it, “I wouldn’t go showing those to the preacher.” Divination is defined as “the practice of attempting to foretell future events or discover hidden knowledge by the occult or supernatural means,” and the practice of divining has been around hundreds of thousands of years, and can be seen in many different ancient cultures.

Many different varieties of divination have been practiced by different cultures throughout history. For example, ancient Egyptians practiced meditation, oil scrying, and dream interpretation in order to better understand the present and to discover answers to particular questions. Greeks were fond of examining the liver and entrails of sacrificed animals for messages and answers, while Romans preferred to look to the skies and observe birds to predict the future. Other cultures that were in tune with nature, like indigenous peoples, Mayans, and Aztecs, used astral bodies and weather occurrences as forms of divination.

Classical divination—or in other words divination that is structured or has guidelines—is usually traced back to the I-Ching, a Chinese text and form of divination printed in around 1,000 B.C. that outlined eight trigrams (sets of three lines) that could be used to interpret the future. While the I-Ching itself wasn’t transcribed until around 1,000 B.C., evidence of the use of I-Ching date back to a tortoise shell from 7,000 to 5,700 B.C. that showed signs of its use. Since then, a variety of divination systems have emerged including palmistry (interpreting palm lines), numerology ( interpreting numbers and dates), tasseography (reading tea leaves), cartomancy (fortune telling using cards), and much more.

The main branch of divination that catches my interest, and the one that tarot and oracle decks are related to, is cartomancy, or the use of a deck of cards, even simple playing cards, to “foresee or foretell future events.” In its most basic sense, cartomancy relies on a set of developed guidelines that allow the diviner to understand the associations of each particular card. For this reason, all oracle decks come with some sort of guide and most tarot decks come with a small guidebook that gives you the basic meanings that have been around since tarot first came into existence in the 18th century, as well as some of the artists interpretations.

While tarot has a well-established history and is very structured—with each deck containing 78 cards made up of 22 major arcana cards and 56 minor arcana cards divided into four suits—oracle cards allow for far more diversity and creativity on the creator's part because you will seldom find two oracle decks that are alike. Despite their differences, tarot decks having universal themes while oracle decks each have a unique number and set of cards, both types of decks are used for the same thing—divination, obviously.

It would be simple to assume that cartomancy is solely based on card meaning and associations, or that it’s possible for any card to seem applicable to your life at any given time, but almost anyone who has had a tarot or card reading from a seasoned diviner will tell you that there’s something more to it.

Madhavi Ghare, a professional tarot reader of over 10 years, writes about what makes tarot more than just a game of card interpretation on her blog, Tarot-ically Speaking. “It is a well-known matter of fact that the cards popping up and telling us what is going on is just plain and simple ‘Synchronicity,’” Ghare writes. “Synchronicity can be defined as ‘the simultaneous occurrence of events that appear significantly related but have no discernible causal connection,’” she explains. In other words, there are no coincidences. Ghare also explains that cards tap into and express the unconscious minds of the people who are being read, they pick up on the energies of the reader and client, and guide both during a reading.

As with most things, there is a rhyme and reason as to why cartomancy and other forms of divination work; they have a structure, they have evolved over hundreds of years of practice, and they have the ability to connect with people. On the instances when I’ve done readings for my friends and family members, I have seen apprehension turn to awe as I am able to tell them specific details about events approaching in their life or decisions they are considering that I, personally, did not know. The most common question I get asked at that point is, “How did you know that?” To which I reply that it’s not me, it’s the cards.

What's in the cards for you?