Why I Needed to Fail A Class
Odyssey

Why I Needed to Fail A Class

I love chemistry because I failed chemistry. 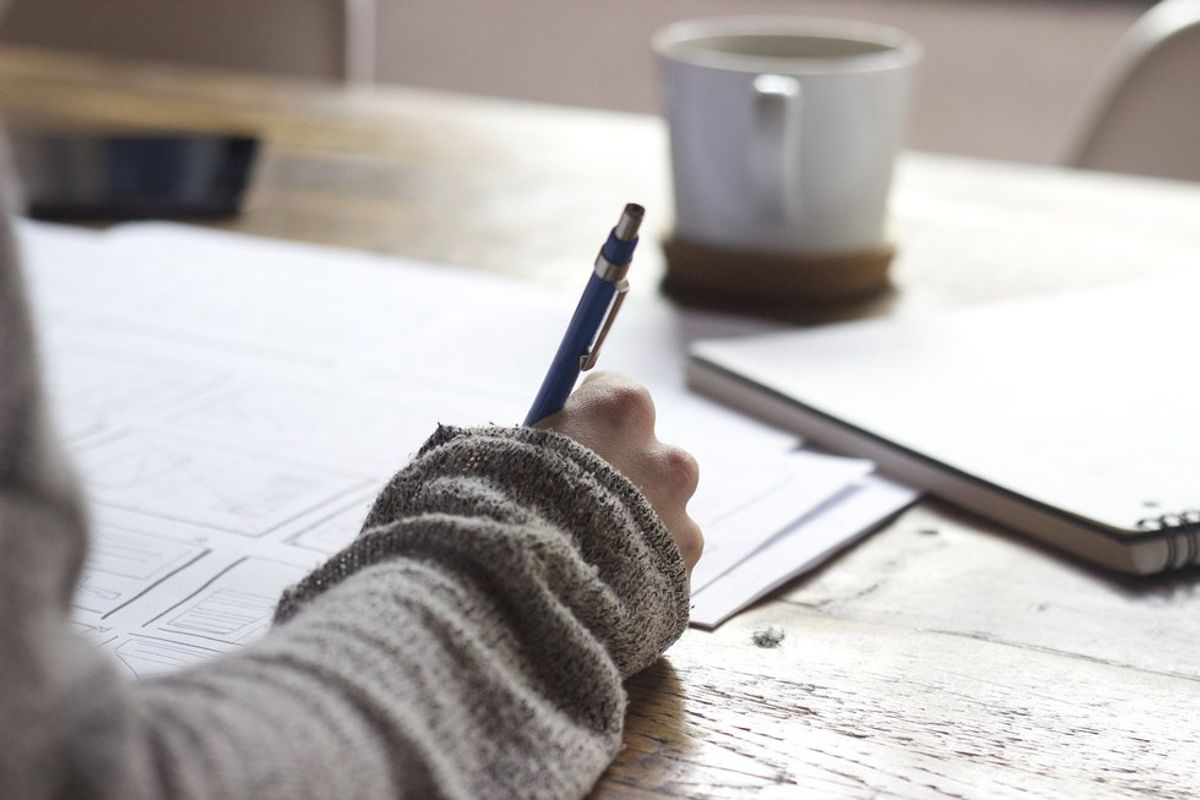 As the girl with straight As through high school, college threw me for a loop.

Freshman year, my papers, tests, and quizzes were harassed by a red pen, and I saw a variety of less than impressive letters, few of them being the first two of the alphabet: C, C, C, C, C standing for, "Can you try a little harder?". And of course, a minus for emphasis. Goodbye, grad school!

When my friends were acing every test or quiz, I got dirty looks and rolled eyes for asking questions in class and began wondering if maybe I was a little out of my league at the University of Richmond. I felt out of place surrounded by peers that managed to balance academics and social lives perfectly-- these were the kids that could party every night, wake up the next morning, and still ace their exam.

The school psychologist said my 3.0 GPA was something I should be proud of considering my heavy course load, but the jeers from that voice in the back of my head liked to convince me otherwise. The voice in the back of my head reminded me that everybody else was excelling except for me, that I was "below average." Being closer to the bottom of the class instead of the top was discouraging. When I turned to my classmates repeatedly asking for help, they seemed exasperated. I was appalled when a friend of mine expressed disdain towards our lab partner who always needed help, saying, "I don't really care if she understands anything as long as I get a good grade." This was when I realized that at such a competitive school, none of my classmates had the time, or the sympathy, to help you, much less care about anybody's success but their own.

When my mother suggested I get extra help, I recoiled. Absolutely not. I did not need extra help. Like many others, I was too stubborn to admit I was absolutely lost in class and besides this, I knew asking for help would come at the expense of a large blow to my ego. What I was most afraid of was the same thing that kept me behind in class: Sitting in front of a teacher willing to answer my questions, but not being able to express what I was confused about. Sitting in front of a teacher trying to explain things more clearly, and still not understanding the second time. Or the third, or the fourth. This fear was what motivated many of us to nod our heads reluctantly when the teacher asked, "Do you understand now?", even if we really didn't. The only remedy to this was finding a way to teach it to myself. This had the potential to be successful but, unfortunately, I could rarely afford the time commitment it required and I clearly did not have the work ethic or study habits.

So, it came as no surprise that I had to retake Organic Chemistry my sophomore year. To say I was discouraged was an understatement. My failure was now spelled out, a large, lackluster "C-", that made my transcript its permanent place of residence. Re-taking the class and the lab was a waste of my time. The elaborate pathway I had drawn out to graduation was now full of obstacles setting me behind. I realized the few friends I had made thus far on my journey would be leaving me behind as they continued on. My ongoing struggle with chemistry made me rethink my decision to be a major in biochemistry and pursue a career in the medical or research fields. I was aware of the rigor of science courses, and suddenly I wasn't sure I was cut out for it after all. I loved science... when I understood it and was good at it. But this didn't happen often anymore. I was torn-- I couldn't possibly pursue a career in a field I struggled with so often, could I?

Retaking organic chemistry was a reminder that I had no idea what I wanted to do with my life.

It served as confirmation every Monday, Wednesday, and Friday, from 9:00am-9:50am that I was terrible at something at which I wanted desperately to excel in. The first day of the new semester was agonizingly slow as we reviewed general chemistry. The days that followed went by at the same pace. Bored by the lack of new and interesting material, I took notes diligently and neatly, looking for things I missed the first time around. I was surprised at how much I recalled from the previous year. When the teacher posed questions to the class, I challenged myself to answer them. The confirmation from the teacher was just the confidence boost I needed. Chemistry lab became an opportunity to demonstrate my knowledge. I was no longer ashamed of my lack of knowledge and took pride in what I did know instead.

In lab, I was prepared to correct my methodological mistakes and focus more intently on the chemical concepts that guided the experiment as opposed to blindly following procedures. Instead of asking questions, I was answering them, explaining the material and procedures to my peers as best I could. It was within this three-hour window that I had those "aha" moments which had become so foreign, and I watched the puzzle pieces come together. I had forgotten how satisfying this light bulb moment was, how it had the potential to encourage curiosity and motivation and fuel excitement.

Suddenly the water I waded in, once murky, became clear. Now, I enjoyed learning chemistry. I wasn't distracted by the thought that I was failing, or by the voice in the back of my head that told me I was "less than" everybody else. I was motivated and more focused than ever. Failing and retaking organic chemistry gave me a new perspective. Within the fifty minute period, I realized I didn't hate the subject, I hated being bad at the subject. If I continued to dismiss that which I didn't understand, or did not excel at, I would continue to miss the opportunities that life has to offer me. I let this realization guide my college experience, reminding myself to be open-minded and refusing to be discouraged from a little failure.

After all, I now love chemistry because I failed chemistry.