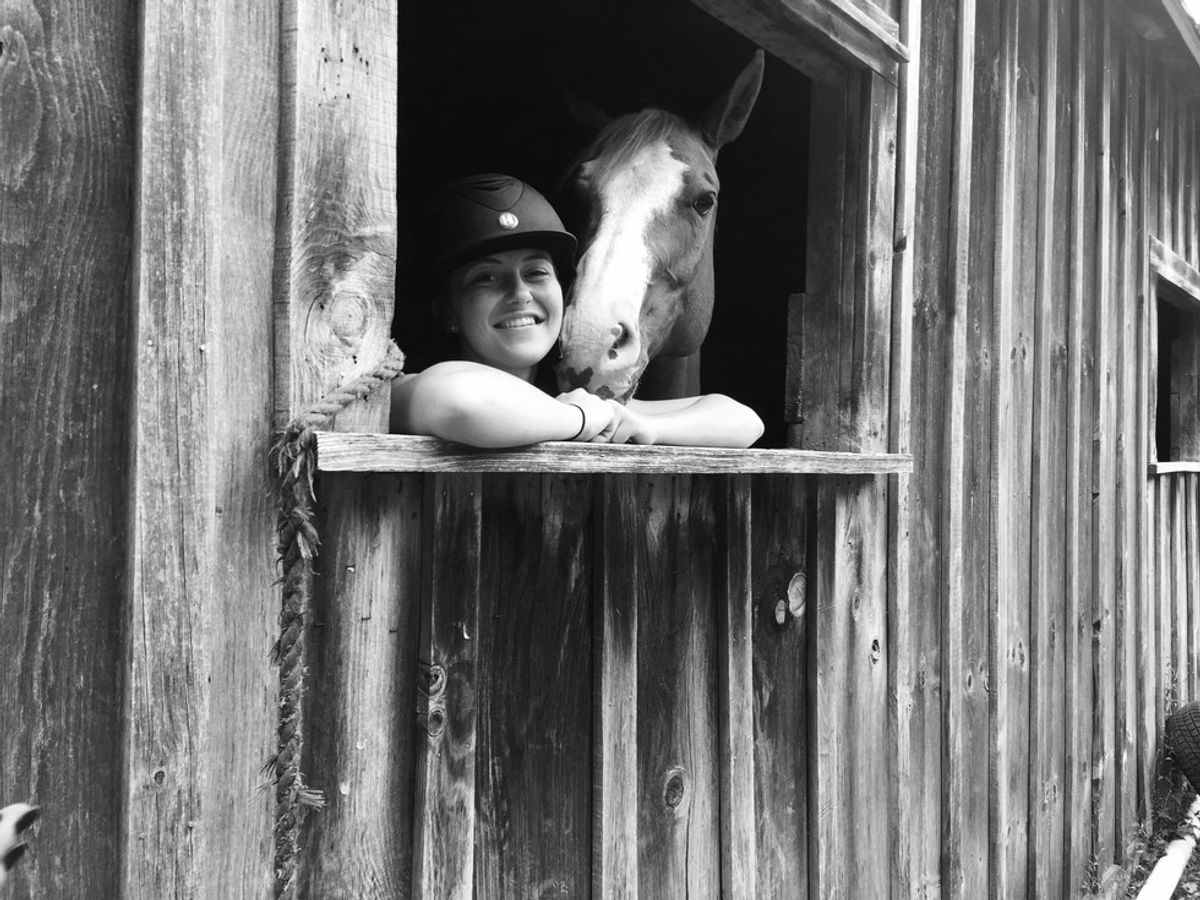 This Christmas I received the best gift that any horse person could have ever dreamed of. Two days before December 25th, I officially got to call myself a horse owner.

For me, Toby and I go way back and I'm always super thankful I've gotten to know him as well as I do now.

After leasing a thoroughbred my senior year of high school, and truly learning more than I could have imagined on her, I was at a crossroad the summer before college. A horse for me to ride at my barn was an uncertainty. However, on my first ride after my lease was up, I suggested to my trainer if I could try Toby, a horse whose previous leaser wasn't around very often and most importantly a horse that could use a rider. To say I was that rider, is not the right choice of words. However, it was worth a shot.

After being gifted a saddle for high school graduation, my trainer and I fitted it for Toby and my first ride in my new tack would be on the horse I would own almost two years later.

That summer I rode him almost every single day, even if I didn't want to. I feel so lucky to have been given the opportunity to ride him so much, but some days were quite difficult. Not getting the left lead and his form of a buck by the gate, light posts, and wherever else he seemed fit, sometimes left me feeling like I wasn't enough or that perhaps he needed a better rider. But I worked on it, from the help of my trainer and anyone else willing to lend me some advice at my barn.

We tried a show together that fall and we got a second, but only because there were only two horses in my first class. I left the ring, got on a trustier steed and found myself back in the show ring, disappointed in myself, unable to understand what I could've done to do better. But that didn't stop me. On weekends, I came home from school to get my much-needed horse fix and found myself coming home more and more.

By Christmas time, he was sold to his new leaser.

While I was at first upset, my trainer promised that I'd still be able to ride and lesson on him and for that, I'm forever thankful.

The summer between freshman and sophomore year I found myself out in California, teaching horseback riding at a summer camp, 3,000 miles away from my heart horse. I got the news he coliced, but would recover fully. I hoped the best for the horse that taught me so much and helped to prepare me for a teaching job. During his recovery time, I found he had relocated to another barn. Saddened to not see him in his stall at my barn, but always ultimately wanting whatever was best for him, whatever that was.

I was supposed to go back to that summer camp, but my study abroad plans to England in the fall were conflicting with my dates and so I made one of the hardest decisions in my life and decided so close before, that I wouldn't find myself at that summer camp again. Toby, who was cleared by the vet to go back to work and back at my barn, was suddenly there for me when I needed him most and I knew I would value a summer of being with him. Family life can be tough and I found that when the days got hard, there wasn't anything a ride with Toby couldn't fix.

We tried showing again and found ourselves to be the rodeo of these hunter shows, but if it would better him, I was in. When the summer was near close and my school had yet to settle my financial aid, I found myself pulling the plug on studying abroad. My dreams of studying in England were halted, unsure of when they'd be restarted. But yet again, Toby was still there for me and became the reason why I wasn't truly all that sad to not be going away for three whole months without horses.

When it became clear to me that he was in need of a new owner, I wished and hoped for my mom to understand my commitment and overall concern for the horse that seemed to save me time and time again. Horses can go through so many owners in a lifetime, and I wanted to commit myself, at just a junior in college to be this horse's last. A gift like a horse, ultimately comes down to money. I know for a fact that if we were millionaires my mom wouldn't have hesitated to tell me yes, "of course you can have a horse." I'd probably have 10 now if this was the case.

But I think my mom finally got to understanding what I was trying to tell her this whole time. We weren't out actively looking for a horse, but during trying times in both of our lives, I found such security in an animal that truly provided so much support to me. Gradually, I found my mom saying things like "Let's make this happen. We can do it."

So, on December 23, 2016, I got to walk into my barn (my mom videotaping and all) to see Toby in a stall with a name plate that listed me as his owner. While I can now officially say he's mine, a part of me always felt like he was.

So, Toby is far from perfect. His local show career is a mystery, but I'm okay with that. He's pretty quirky actually and the way he eats his food always makes me laugh. But he's mine and we get along and understand each other in way only other animal lovers would understand. I couldn't have asked for a better four-legged best friend (tied with my pup of course.)