Do these moments ring a bell? (Pun intended!) 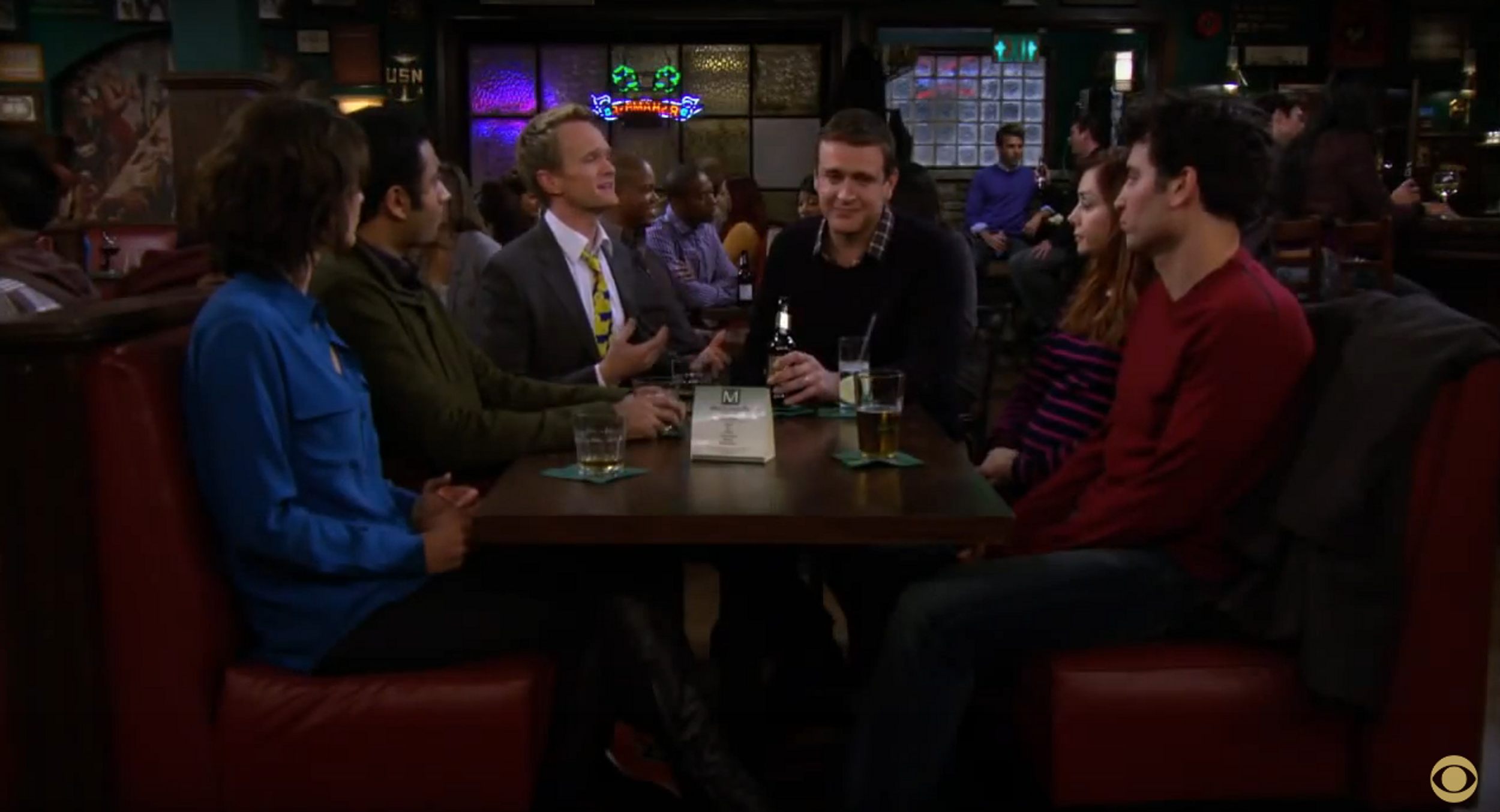 When I took a Social Psychology course in college, I loathed that the textbook drew examples from pop culture phenomena that I hated such as "Jersey Shore" and the "Twilight" franchise.

And this was particularly frustrating when I knew well that there were actual, and genuinely comical, examples of social psychology theories and concepts in action in "How I Met Your Mother".

This is not something that I noticed once or twice, but rather in several episodes, and it left me thinking: at least one person involved in the show, whether it was a writer, director, producer, etc., HAD TO have been a psychology major!

Here are the social theories I recognized—which were SO cleverly written into plot lines over the course of nine seasons:


Remember the time in season three when Robin acted like her teenage self when reuniting with her ex-boyfriend from her "Robin Sparkles" days? As the gang wondered why Robin's maturity level had suddenly dipped, Marshall then coined a new term: “revertigo."

As Marshall explained, when reacquainting with someone from the past, such as an old friend, you revert back to the person you once were—personality and all—when spent time with said person on a regular basis. This is demonstrated when Lily spent time with her old friend Michelle (as shown in the video above) and when Ted invited his high school buddy, Punchy, to spend a weekend in New York.

But the correct term for “revertigo” is actually "regression," This involves dialing back to the personality, maturity level, etc. that you associate with your relationship to said person, which shows through the way you interact with him or her.

It wasn't until season six that Robin and Marshall realized that, despite being friends for so long, they have never actually hung out alone. So, they make dinner plans—no big deal right?

But then their night out begins on an awkward note. Marshall and Robin then begin to theorize why having dinner alone with each other is SO awkward. Marshall, who is happily married to Lily, shares his explanation: the "Mermaid Theory."

Marshall tells Robin that Barney first told him about the “Mermaid Theory” after he got a new secretary whom they both considered to be unattractive. But the theory, as Barney explains, states that since Marshall will see her everyday in the office, he will eventually find himself attracted to her. And just like Barney’s “fake history” stories, he tells Marshall that this theory originated from sailors out at sea; when sailors desperately desired female companionship during their long voyages, they would suddenly begin to hallucinate that the manatees in the water were actually beautiful mermaids.

Ridiculous, right? But Barney uses this story to warn Barney that his “mermaid clock” will one day run out—and when it does, he will suddenly be enchanted by his secretary. Marshall scoffed at the notion, but after one year, three month, and 16 days, he came to work to find that Barney’s prediction was correct.

After telling his story, Marshall expresses his fears to Robin, and tells her that, out of respect for his marriage and Lily and Robin’s friendship, he had purposely dodged alone time with Robin all these years in order to avoid the wrath of the “mermaid effect” on her. Crazy, huh?

But the Mermaid Theory is not such a crazy idea; it actually references the “Proximity Principle" of social psychology. This theory states that people who are often in close proximity to one another (such as attending the same classes or living in the same apartment complex) are more likely to form friendships and relationships. But, as many of Barney’s theories do, the “Mermaid Theory” takes this idea to extremes by suggesting that proximity will guarantee sexual attraction.


In season seven, Barney's half-brother James dropped by MacLaren’s one night to pay the gang a visit. But in his half-brother's absence, James revealed a secret: he's not too crazy about Barney's girlfriend, Nora. Why? As James explained in the clip, he picked up several similarities between Nora and their mother...and it totally weirded him out. This manifested into a realization for each member of the group—not only did they begin to notice similarities in personality traits, but they would LITERALLY see their parents in their significant others!

This episode brilliantly visualized the “Oedipus/Electra Complex,” which refers to the Freudian idea that you're attracted to your parent of the opposite sex, and may even unknowingly select partners who are like said parent. Kevin, who was a professional therapist, backed up James's claim: “Psychologically speaking,” he said, “it's perfectly normal to end up with someone like your parents.”

This had the biggest effect on Lily and Marshall, thus spoiling their night of intimacy: Lily couldn’t help but picture Marshall as her dad, and in a hilarious twist, Marshall pictured Lily as his dad. Kevin also found himself picturing Robin as his domineering mother, and they all felt disturbed by this sudden effect that was caused by noticing similarities between their lovers and their parents.

That is, until Barney swoops in to save the day. Barney, who eventually picked up on the same similarities that James had disclosed earlier, tells the gang his stance on the matter: “My mom is the best person I know!” he says, “If Nora's even the tiniest bit like her, I'm a lucky guy.”


When Ted’s relationship with Zoey in season six took a rocky turn with constant arguing, Ted determined that its time to call it quits. But whenever he attempted to break up with her, he would suddenly view their arguments in a sentimental light—or rather, a “rose-colored” light. And he couldn’t bring himself to do it.

Similarly, Marshall also grappled with quitting the job he hates when he experienced what Robin referred to as the “Graduation Goggles” effect. Robin coined the term “Graduation Goggles” for Ted and Marshall’s feelings of last-minute sentimentality that prevented them from calling it quits—Ted in his souring relationship with Zoey, and Marshall in his soul-sucking corporate job.

Robin explained it like this: upon graduating from high school and moving on, you may experience sudden feelings of sentimentality, even if high school wasn’t exactly the best years of your life. Or, in other words, you view a not-so-great experience through "rose-colored glasses”.

In psychology, the term for last-minute sentimentality is “rosy retrospection,” which in turn inspired the phrase “seeing things through rose-colored glasses.” AND, if you notice, when Marshall and Ted are shown viewing their experiences with “graduation goggles,” they were LITERALLY seeing the world in a rosy tint.

Ahhh, “How I Met Your Mother” writers, I see what you did there…


When Marshall made a bet with Barney during season seven that Barney couldn't cook like a professional Hibachi chef, poor Marshall had no clue what he was getting himself into. And the stakes were high: Barney's wager was that he had to wear Marshall's super tacky "ducky tie" for an ENTIRE year, while Marshall and Lily negotiated the terms of how Barney would be allowed to touch Lily's breasts. (Someone remind me WHY she agreed to this??)

But then Marshall soon caught on to the long con that Barney had been planning for FIVE years. As Marshall explains, every time he suggested going to Shinjitsu (the local Hibachi hotspot) for dinner, Barney would purposely sneeze with the goal of forming an association in Marshall's mind. Eventually, after enough trials, Barney was able to reverse the association, meaning that every time he sneezed, Marshall would then automatically—and unknowingly—request to go to Shinjitsu to eat.

Why did Barney do this? Unknown to Marshall, Barney also enrolled himself in classes dedicated to Hibachi cuisine with one very specific objective: whenever the time came that Barney truly desired something from Marshall, as he says in the clip above, Barney would get it—guaranteed.

The actual psychological phenomenon of forming associations is called "classical conditioning", which may ring a bell (pun intended) if you've ever heard anyone refer to "Pavlov's dogs." I won't bore you with the details of Pavlov's experiment, so I'll sum it up like this: Barney successfully turned Marshall into "Pavlov's dog" by conditioning him into an engaging in a behavior (in this case it was suggesting going to Shinjitsu) unconsciously—and it was deviously brilliant!

Have you noticed these or other examples of psychological phenomena in "How I Met Your Mother"? Tweet me your thoughts @missjulia1207!