Voldemort's most loyal companion, his snake Nagini, is a maledictus. 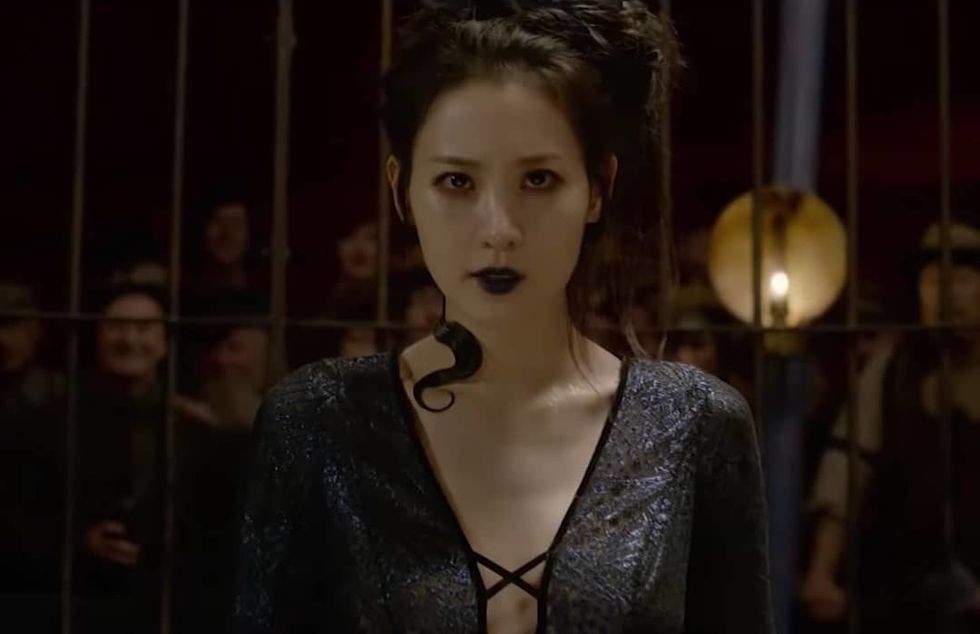 There have been several crazy fan theories about Harry Potter (i.e. Ron is Dumbledore and Dumbledore is death) over the years due to the world's elaborated details, but not many have been confirmed.

When the Fantastic Beasts and Where to Find them: The Crimes of Grindlewald campaign poster came out, the theory soon formulated that the mysterious woman cuddle up to the obscurial, Creedence, could be Nagini or Nagini's mother.

Fans have always been devoted to researching all they can to these types of things, so it wasn't long until it was uncovered that a new creature would be introduced in the film called a Maledictus - a blood curse that is incurable and turns the person into a viciously beast. Even more, research shows that it is passed from mother to daughter. So, when we see this woman ( played by Claudia Kim )next to Creedence, and her outfit closely resembles the skin of a snake, we get a bit suspicious.

Plus, we know Nagini is extremely intelligent and vicious; her venom is a peculiar type of lethal, a lethal not possible for normal snakes. Could the blood curse be any explanation for this?

Even more interesting, Claudia Kim could not reveal her name for quite some time.

Then, when the trailers came out for the film, fans noticed that in the magical circus, there is a poster of a woman wrapped in a snake with the word Maledictus under it; it just rang more alarms in people's minds.

Recently, though, in an interview, Claudia Kim revealed to her castmates and to everybody that she plays the character Nagini, and the theory was confirmed. Better yet, there's a little clip of her turning into the giant snake!

This theory was a very reasonable one, and it turned out to be true. Nagini was a woman at some point. My only question now is, how did she end up becoming Voldemort's most loyal companion and his final Horcrux?

As this might be short, this theory has been a favorite of mine for ages, and the fact that it's true makes me happy beyond belief. Growing up with Harry Potter, I've been looking for clues in the Fantastic Beasts films that can tie to the wizarding world I know, and this makes all the difference because it's leading up to the whole story of Harry Potter.

Can you think of any more theories that could be true?