Halestorm Holds Nothing Back and Attacks Us Hard With 'Vicious'

Halestorm Holds Nothing Back and Attacks Us Hard With 'Vicious'

Sex, drugs, and rock and roll — it doesn't get much better than this, folks. 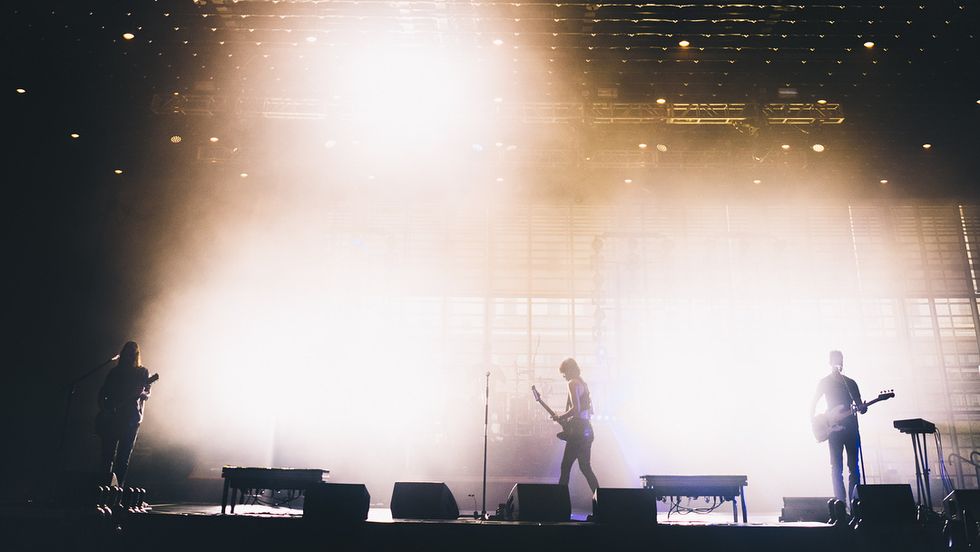 Halestorm dropped their fourth album, "Vicious," on July 27, 2018, and I can't stop listening. It is everything I could've hoped for and more. You can practically feel how much heart and soul the band put into their work.

I feel as if this album encompasses everything that Halestorm is and always will be — owning yourself, respecting yourself and just straight up rocking hard. Hard rock is alive and here, and I'm ready to blow my speakers out.

"Vicious" feels like sex, drugs and rock and roll, laced with empowering and uplifting messages. Halestorm never fails to step it up a notch. Let's do this.

The opening track is certainly one of my top favorites. I mean, right off the bat, we are hit with Lzzy's undeniable talent. We're presented with the song that holds its message right in the lyrics: Fight back.

There will always be vultures in your life, but it's important not to give up. You need to keep fighting.

"I don't give in, I don't give up
I won't ever let it break me
I'm on fire, I'm a fighter
I'll forever be the last one standing
Black vultures circling the sky
Pick at the pieces
Scavengers wait for me to die
But I'm not defeated"

Lzzy Hale's rough scream will probably always make my heart stop. It has been speculated that some of this song picks at the state of our country.

Though the band is in no way political, this song is amazing.

If you don't like this song, you're wrong. Lzzy Hale just spits out the lyrics like it's nothing, but it's seriously everything. I love this song because it's about owning yourself. Literally, both verses are her saying why she did it. She wanted to, and she did it. You want to? Do it!

I kind of get an "Is this lust or love?" feel from this song. It's a good song with great lyrics, just like the rest of the album, though. I haven't listened to this one as much as the others yet, so I don't have much more to say about it. Oops.

I really like the contrast between the verses and the chorus of this song. The verses are a tad more relaxed and almost sound acoustic, but the chorus is hard and rough. I feel like it captures the song well, since it's about all these emotions and the sexual tension that seems to be happening.

"Killing Ourselves To Live"

This song makes you want to put your lighters in the air and sing your hearts out. This one, once again, is one of my favorites. I just love the soul behind it, and the power. It's one of those songs you just have to give a listen to in order to understand.

While I still love Lzzy's rough and powerful voice, this more acoustic song is beautiful. Lzzy always sounds amazing, but I love a couple of the slower tracks, as you can really hear her voice and the rawness of it. You can hear her giving it her all and connecting with the song, bringing through the messages of hurt and pain and strength. This one hits hard.

Have you ever felt as though you were addicted to someone? Like they were your drug?

I have not, but I'm a writer, so I've written about it. I get it. Moving along, this is what the song is about: having someone who gets you high and makes you feel good.

Kind of jumping off of "Do Not Disturb," instead of owning your sex life, this one is straight up about owning yourself. It's about not worrying about being traditional. It tells you not to worry about what everyone expects from you.

The song starts with Lzzy talking about how she tried to be perfect and cared what people thought, but that isn't who she is. And people are just going to have to accept that. I love that. You shouldn't be ashamed of who you are. As I've said before, and as this album says, own it.

I always get excited about hearing the song that an album is named after. I like seeing if I can figure out why, or if I think it lived up to the hype of it. Well, "Vicious" certainly does.

"What doesn't kill me
Makes me vicious
I'm not gonna break
I can take all that you can give
This is survival
Of the sickest
I am not afraid, bring the pain"

This one's a song not meant to make you feel sad but reminiscent. I know I sound awful, but I belt this one out in my car anyway.

Honestly, you can't go wrong with Halestorm. I know their sound isn't for everyone, but even if you just give it a listen to hear the lyrics and get the message, it's totally worth it.

Halestorm has been a part of my life for a while now, and I always look forward to what's coming next from them. They're an incredible band with some serious talent. I highly recommend buying the album, or you can also listen to all of the audio on their YouTube page.

I have seen them live three times now, so I can also assure you that what you hear is them. Seriously, Lzzy sounds just like that, if not better, live.

All I'm saying, give them a chance. They're pretty awesome if you ask me.

From Your Site Articles
music
Report this Content
This article has not been reviewed by Odyssey HQ and solely reflects the ideas and opinions of the creator.