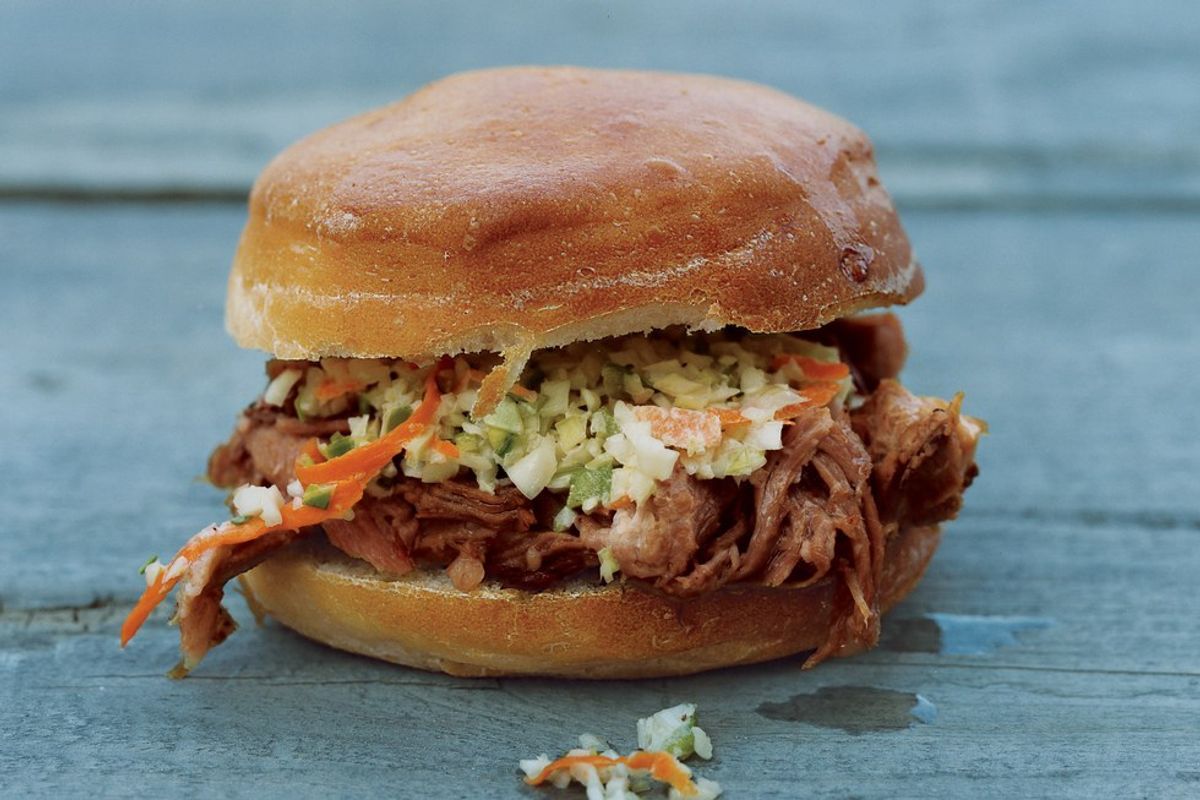 Across America, especially in the South, barbecue is a dietary staple of game day, family reunions and Sunday dinner. Small town barbecue joints, annual church "Pig Pickin's" and washing down your barbecue sandwich with an ice cold sweet tea while tailgating are all integral to life in the American South. Barbecue is familiar and classic, a comfort food, but despite this it's not as simple as it seems.

Barbecue varies from state to state and even regionally within states. Being raised in North Carolina has made me quite sensitive to these variations. From the day I learned to chew food, I was fed Barbecue and repeatedly lectured on the two varieties of this seemingly sacred pork product. I was taught that there is Eastern North Carolina barbecue and Western North Carolina barbecue. After a while, I began to notice that people from the Eastern and Western parts of the state both seemed fiercely proud of their variety of Barbecue. My family, being from the East, holds a unwavering preference for Eastern style. Both the East and the West claim their barbecue is undoubtably the best. While interviewing him for this article, my Grandfather perfectly exemplified this by simply stating, "If it's from the east, it tastes good, if it's from the west, it tastes bad." I have always found this age old competition fascinating. Having tried both types of barbecue, and finding them both delicious, I was inspired to do some research in order to find out which variety was truly the best.

To conduct my research I consulted my Great Aunt and Uncle, Dr. Frank Dawkins and Dr. Karen Dawkins, who recently became certified BBQ judges for the North Carolina Barbecue Society. (The fact that there is an entire society devoted to Barbecue demonstrates just how seriously North Carolinians take their BBQ.) The first thing I asked them was to explain the difference between Eastern and Western style.

They explained that Eastern style BBQ (pictured below) is made with a vinegar-based sauce that usually also includes sugar and red pepper. This variety is made with meat from many different areas of the pig.

Then they explained that Western-style BBQ (pictured below), also called Lexington style, is also made with a vinegar based sauce but that sauce includes a tomato or ketchup component. Western BBQ is usually sweeter, redder in color, and made only with pork shoulder.

After learning the difference between the two types of NC barbecue, I asked them as certified Barbecue Judges how they evaluate the quality of BBQ. They told me that BBQ judging is pretty subjective but overall BBQ is judged on three things: taste, tenderness, and appearance. I then proceeded to ask them the big question, Which is better, Eastern style BBQ or Western style BBQ? Their answer was that there is no real way of telling. They said because people seem to favor the barbecue from their hometown or region, Eastern style wins in the East, and Western style wins in the West, because the judges for competitions in the East are usually from the East, and judges for competitions in the West are usually from the West. I appreciated the honesty of this answer, but I realized I had to deem my research inconclusive.

It was difficult to accept that I will never know which style of barbecue is truly the best, but at least I am now very educated about regional pork flavors. My hope is that one day the people of North Carolina will accept that all BBQ is delectable and be united by their love of pork.