Gimme Danger: Iggy Pop And The Girl On The Train
Odyssey

Gimme Danger: Iggy Pop And The Girl On The Train

Hey man, where'd you get that lotion? 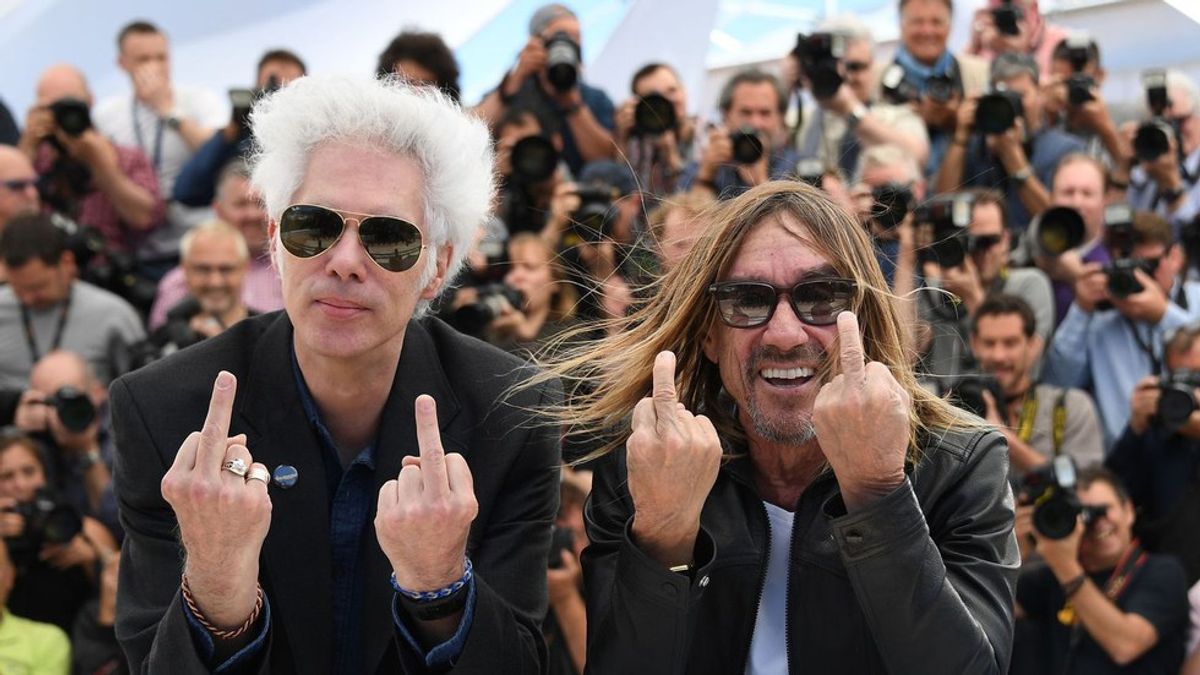 The documentary kinda sucked. Barely had any of the crazy shit I was hoping for, the whole reason I went. Iggy cutting himself on stage, Iggy smearing peanut butter on himself, Iggy calling a bunch of bikers “faggots” and jumping into the audience for them to beat him up. It was mostly band history. Ron joins, Ron changes to bass, the band reunites, Ron dies.

Iggy comes out for the Q+A with the director in a sweater. He can’t hear anyone, and the moderator lady has to repeat every single question to him. The questions are inane, innocuous, nothing to do with the movie: “How do you stay in shape?” “What’s the last rock concert you went to?”

Q: Did anyone crazy opened for you back in the day?

A: I’m just trying to remember if anyone ever opened for us.

A: Nothing crazy about Alice Cooper.

“Wait, me?” I say, stalling for some reason.

“Fuck, I forgot,” I mumble, and then suddenly I shout “Whose idea was it to use sleigh bells on “I Wanna Be Your Dog?”

“I heard that one!” exclaims Iggy Pop, obviously excited. “My idea!” He then explained his influences that gave him the idea to use such strange percussion, like jazz musician Pharoah Sanders, to enhance the soul of the song. One more question and that’s it. Whoa. Iggy Pop answered me.

I walk outside into the wonderful New York City night, elated, unstoppable. I just interacted with Iggy Pop, coolest man alive. Nothing can bring me down. I hop on the subway, still taking in what just happened.

"I'm not actually going to do that, don't worry," a girl says to me as if I had been eavesdropping on her conversation. Maybe I had been absentmindedly looking at her while reminiscing about my moment with Iggy Pop, but maybe I hadn't.

"Don't worry," she says. She's probably drunk. She's stunning. I always say "What?" when I'm caught off guard, even if I heard what they said. It's a terrible habit. Not suave at all.

I go on facebook to tell as many people as possible of this monumental accomplishment of mine. Rolling Stone article says Bob Dylan finally acknowledged and expressed extreme awe and gratitude toward his Nobel Prize win, despite previous implication he was ignoring it completely and did not give a fuck. "Disappointing," I comment.

What a perfect night. It’s my stop. I start to leave, she’s smiling and waving at me, and then, fuck it, it’s Saturday night. I’m not really going anywhere. I walk over to her.

“Listen. I know this is weird but I just met Iggy Pop and I’m feeling unstoppable. I don’t know if you’re attracted to me or you’re just nice or you’re just drunk, but you’re so beautiful and I’m not ready for the night to be over, so I’m gonna give you three options. One, you invite me to wherever you guys are going. Two, you give me your number and I’ll fuck off. Three, you just tell me to fuck off.” She’s still smiling.

No, what I really do is walk out of the train at my stop like a normal, boring person, smiling and waving at her as she smiles and waves at me. The gray, unforgiving subway doors slam closed and I am flooded with regret. I had a wallet full of cash and a head full of nothing; I could have been anyone. The opportunities of this brisk New York City night were endless, and I watched them all slam shut in front of me with the dull, rubbery thud of the subway doors.

I look around desperately, looking for anyone willing to acknowledge the humanity of another person, but as usual, no one is making eye contact with anyone and everyone is in a hurry to be somewhere else. No one in New York City ever wants anyone to meet them unless they’re drunk.

I write a long apology text to this Brooklyn girl I’ve been ignoring, only to delete it all when I remember I’ve probably been ignoring her for a reason. I get a text from another Brooklyn friend about a Radiohead song stuck in her head. Turns out to be a Death Cab For Cutie Song. She would love to go to Rockwood Music Hall tonight but she has to be up early for Pilates training. I get another text: “I’m bored in bed.” I do not care. I get a text about the app I’m thinking of making. “I am morally opposed to in-app purchases,” I reply.

Read some more of this god damn Bret Easton Ellis novel on the train about demoralized college kids who are lonely to the point of nihilism, terminally numb and latching on compulsively to anything that might make them feel remotely alive: meaningless sex, semi-hard drugs, lying.

It's freezing outside when my train pulls up to my town. I put the top down, turn my car stereo all the way up, and floor it down Main Street, screaming: "SO MESSED UP... I WANT YOU HERE... NOW I WANNA BE YOUR DOG... WELL, COME ON!"

Oh, I guess I should finish the review.

The documentary kind of sucked. It was a bafflingly wholesome portrait of the most depraved band in rock and roll. Everything that made me interested in a documentary about The Stooges was extracted from the story and plopped at the beginning to be quickly glossed over so they could get to the heart of the documentary: A conventional longform Iggy Pop interview, embellished with bad Monty Python animation and sparse, brief clips of archival footage.

Especially given the title, I assumed the documentary would show the notorious band in their wildly self-destructive heyday of audience antagonizing: a group of committed counter-counter-culture musicians with visceral, primal rage and zero self-preservation instincts. But it was mostly just a straightforward history of the band, with members dropping in and out, reunions, deaths. Even that part wasn’t particularly well-done: I had trouble telling which older member was which younger member. The doc was pretty cool, pretty funny, not groundbreaking, not very memorable. C+

The documentary I expected to see was one of a band described by Lester Bangs in the following excerpt of his essay, "Iggy Pop: Blowtorch in Bondage"

The audience, which consisted largely of bikers, was unusually hostile, and Iggy, as usual, fed on that hostility, soaked it up and gave it back and absorbed it all over again in an eerie, frightening symbiosis. "All right," he finally said, stopping a song in the middle, "you assholes wanta hear 'Louie, Louie,' we'll give you 'Louie, Louie.'" So the Stooges played a forty-five-minute version of "Louie Louie," including new lyrics improvised by the Pop on the spot consisting of "You can suck my ass / You biker faggot sissies," etc.

By now the hatred in the room is one huge livid wave, and Iggy singles out one heckler who has been particularly abusive: "Listen, asshole, you heckle me one more time and I'm gonna come down there and kick your ass." "Fuck you, you little punk," responds the biker. So Iggy jumps off the stage, runs through the middle of the crowd, and the guy beats the shit out of him, ending the evening's musical festivities by sending the lead singer back to his motel room and a doctor. I walk into the dressing room, where I encounter the manager of the club offering to punch out anybody in the band who will take him on. The next day the bike gang, who call themselves the Scorpions, will phone WABX-FM and promise to kill Iggy and the Stooges if they play the Michigan Palace on Thursday night. They do (play, that is), and nobody gets killed, but Metallic K.O. is the only rock album I know where you can actually hear hurled beer bottles breaking against guitar strings.