How "Ghostbusters" Demonstrated That Misogyny Is Alive And Well In America

And how it was still successful despite the backlash. 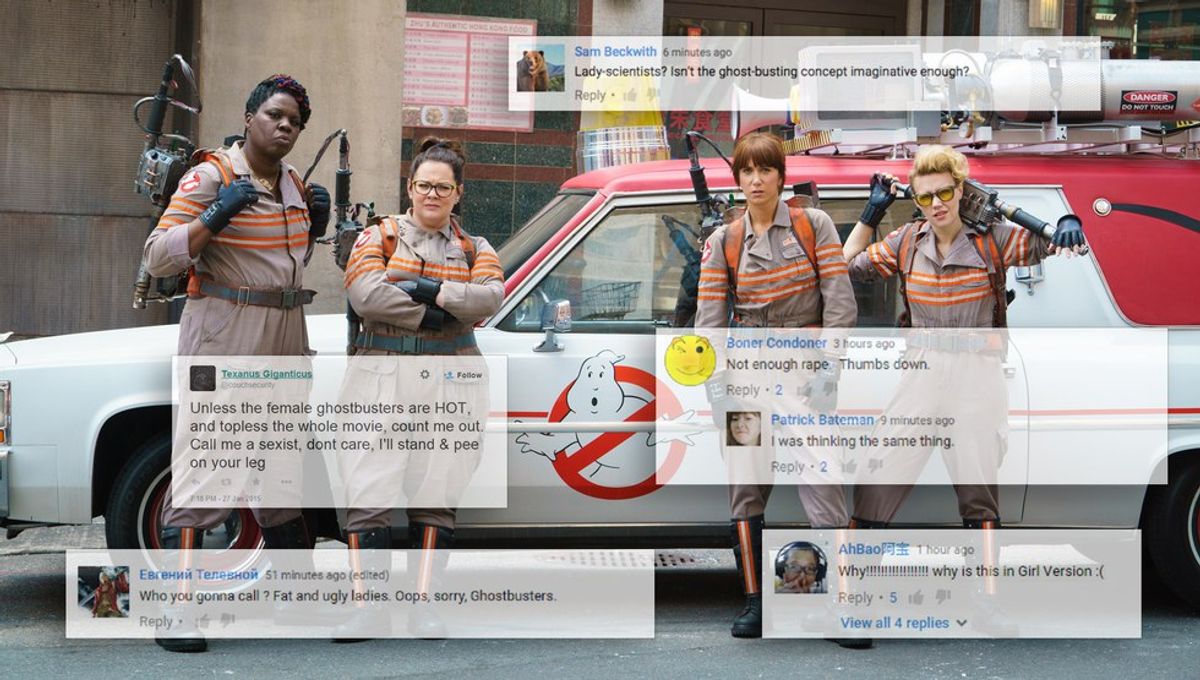 Remake: A remake is a film or television series that is based on an earlier work and tells the same story.

Reboot: A reboot means to discard all continuity in an established series in order to recreate its characters, timeline and backstory from the beginning.

For those of you playing catch up, "Ghostbusters," a modern day reboot of the popular 1984 franchise staring Bill Murray and friends, opened last weekend to a "modest" $46 million. It should have been just another summer comedy, fun to see and easy to forget, however, "Ghostbusters" has been unfairly rocketed into the seat of "most controversial film of the summer." Why's that? Well, director Paul Fieg made the bold choice to gender bend this reboot, casting actresses Melissa McCarthy, Kristen Wiig, Kate McKinnon, and Leslie Jones to play the lead roles.

And boys lost their shit.

In the wake of that announcement, boys across the country have made it their life goal to do everything in their power to ensure that "Ghostbusters" would be an epic failure. And they, well, failed, because regardless of what kids are saying on Reddit, 2016's "Ghostbusters" was a hit for the A-List cast and crew. Sure, it's no secret that the opening weekend gross didn't even come close to hitting the $144 million dollar budget for the film, but that's not the only factor that plays into if a movie is successful or not. As far as opening weekends go, this was the biggest opening weekend gross for any of the all female cast. Not only that, but "Ghostbusters" successfully launched Kate McKinnon and Leslie Jones, who were up until last weekend almost exclusively known for their work on Saturday Night Live, into the realm of movie stardom. Feig, who has collaborated with McCarthy on several other comedy hits like "Bridesmaids" and "The Heat", saw his most successful opening weekend to date, with "Ghostbusters's" gross surpassing that of "The Heat" by a little over $4 million. And that's just the domestic opening weekend. At the time of this writing, "Ghostbusters" has almost doubled its gross from last weekend, just on the domestic circuit. Including the money it will no doubt make in the foreign market, I can't imagine it won't easily surpass it's $144 million budget by the time all is said and done. And I can't imagine a sequel wouldn't be green-lit, if it hasn't already been.

But that's not the point I'm trying to make. You see, it was only brought to my attention by a friend a week before "Ghostbusters" came out that it was in fact a "controversial" film. And because I am a naive child who believes that the world is a wonderful place full of love and happiness and acceptance, I couldn't even fathom what people would be upset about. Reboots are, after all, happening all the time, so why would a "Ghostbusters" reboot be the big deal breaker for the Internet?

So there it was. The big no-no that "Ghostbusters" made was casting women instead of men to play the roles of The Ghostbusters in a brand new reboot of a franchise that was released over 30 years ago. When I did some more Internet research I uncovered that an upsetting amount of men were extremely disgruntled by this decision, going as far as to try and cause the film to fail by pulling little Internet crusades against the film. The trailer, for example, is now one of the most disliked trailers on YouTube in history; a shocking, albeit suspicious, statistic when the trailers of famous flops, like the "Fantastic Four" trailer and the trailer of any Adam Sandler film in the last eight years, have significantly less dislikes. This is not because "Ghostbusters" is a worse film than "The Ridiculous Six" (nothing ever will be, trust me) but because Men's Rights Activists (MRAs) have joined together to try and stop an all female reboot from breaking the glass ceiling they're comfortably seated atop of. Comments left on the trailer demonstrate just how toxic this response has been, with users making rape jokes and poking fun at the appearances of the women in the film:

This is only a few of the many heinous examples of misogyny towards the women in the film and the film itself. And the question I have is simple: Why?

Why is that the gender-bent reboot of a franchise that existed over 30 years ago, a franchise that has long since lived and died, such an awful reality for so many men? Especially when it's just as easy to not see the film, to let it exist and never even acknowledge it as canon (which, it isn't even a part of the original "Ghostbusters" universe, so having this one doesn't even effect the first one at all). To show how ridiculous this all is, I too was very upset when Sony rebooted "Spider Man" a couple years ago with Andrew Garfield, because to me, Toby Maguire is and will always be the only Spider Man I will ever accept. But I didn't bully and harass Garfield on Twitter. I didn't start a campaign against "The Amazing Spider Man." Do you know why? Because I'm not a little baby. I just didn't see it in theaters, and I chose to still like the original Maguire "Spider Man" films more. I knew that there was a whole new generation of Spider Man fans who wanted a new Spider Man, and I accepted that and moved on because I am an adult.

The real problem being exposed by "Ghostbusters" controversial existence is that misogyny still exists deeply in this country and in the film industry. I mean, in an industry where most blockbusters are comprised of men; where most comedies are comprised of men; where most of the attention is always on men; in an industry where the majority of writers, directors, producers, editors, etc. are men... one director decides to make an all female reboot of a classic "male" driven film and that was just too much for the country. Just one film was too much for an industry and a country saturated with sexism.

And it's a damn shame, because "Ghostbusters" was a genuinely fun, funny, and delightfully meta comedy. It did the original justice, played homage to it as it should, but also created its own new foundation for a franchise that will only grow stronger. And that's exactly what a reboot should be: an homage, but still different and unique. Understand, there is a huge difference between a "remake" and a "reboot."

At the end of the day, I'm deeply disappointed in the response to this film and what it means for women in this country, and especially for women in the entertainment industry. But in the face of such intolerance, hatred, and sexism, I'm proud that strong women like Melissa McCarthy, Kristen Wiig, Kate McKinnon, and Leslie Jones, who defied these voices anyway, and made a kick-ass film. Because Oh my God, they crushed it, they were all so funny. And if you're wondering why it's so important to keep making films like this, one only needs to look at photos of the premiere, where little girls dressed as Ghostbusters smiled bright as their lady heroes walked by, to see what kind of impact female representation has on the younger generation. How important it is to keep churning out films that feature strong, funny, female actresses in typical male roles. How important it is to keep doing the opposite of whatever the MRA movement wants women to do.

So I propose an "Indiana Jones" reboot next. I always thought Indiana was more of a girl's name anyway.

Caitlin Marie Grimes
University of South Florida
7478
Beyond The States