Being An Organ Donor Is The Best Thing I Ever Did

I Gave My Kidney To My Best Friend's Step-Dad, And It's The Best Thing I Ever Did

I knew that I couldn't watch my best friend lose someone. I love her way too much. 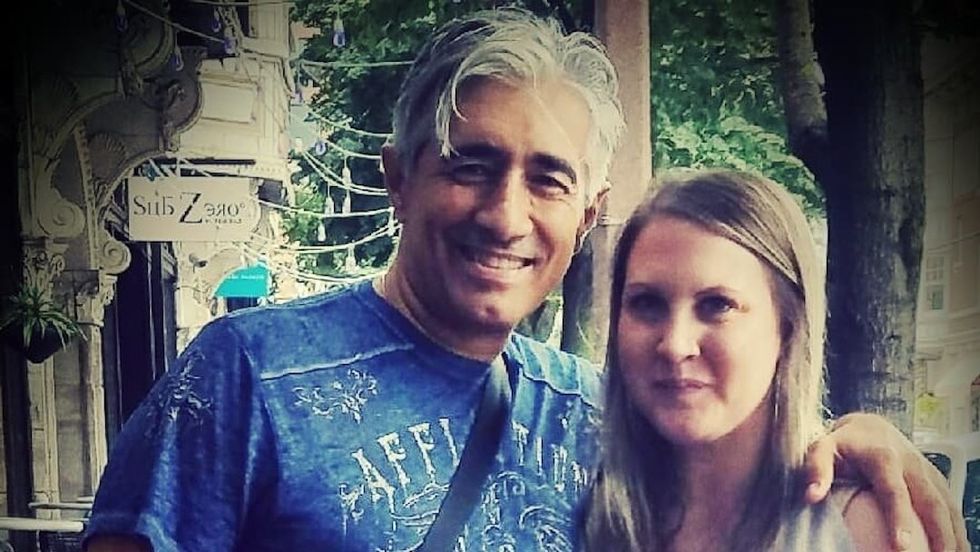 In December of last year my best friend, Meagan, called me, crying about how sick her stepdad was getting. His kidney disease was progressing and he really needed a transplant. Her older sister got tested to be a donor, but her own kidneys were not functioning high enough to donate. Meagan was sad and overwhelmed and I could tell she felt guilty because she had her own kidney issues that prevented her from qualifying as a donor.

I knew her mother and her sisters but had only met Sam once at that point. Listening to her vent on the phone, I said, "What if I do it?" Initially, she didn't take me seriously and I honestly didn't even take myself seriously, but the more I thought about how sad she'd be to lose him and how much Sam meant to her mother, I knew I was committed to trying.

So I decided to ask her mother how to get tested.

I began the process in January 2018. It was hard to get to all the tests and appointments in between working full time, going to school, and squeezing in internship hours. I had multiple labs done, an EKG, constant blood draws and blood pressure tests that would not only match us but would also ensure my body could withstand the loss of a kidney. My kidneys needed to be functioning at around 80% and my tests came back at 180%.

I got the news that I was a complete match in late spring.

I was absolutely terrified. I chose not to tell anyone about the surgery at first, fearful that I'd have the procedure and then it wouldn't work for him. My biggest fear was that I'd risk my life and my kidney would fail him. I didn't know if I could handle that emotionally.

The psychological assessment was the worst part.

I sat in a small room with a social worker, while she interrogated me, to ensure I wasn't being pressured into anything. She asked me over and over again if I could handle the surgery failing. She asked if I'm prone to anxiety or depression and who would be there to pick up the pieces if Sam got worse or if my own health declined.

After that appointment I had to create a living will and sign documents, dictating who had a say over my body if I could no longer speak for myself. That was a very hard moment. I had not even told my family about the surgery, and here I was making them my beneficiaries and legal guardians of my organs.

I finally told my family two months before the scheduled surgery.

I was terrified but also anxious to see if it could really help him. Sam was so careful not to pressure me and his gratefulness has fueled me in so many ways.

I was so nervous to tell my family. I all but created a power-point presentation, dictating my reasoning. I was prepared to go to court and battle it out with them but was met with nothing but love and support. I was so nervous they would not understand, but they never questioned me. They just asked where they needed to be, and when.

Finally, on June 5th, 2018, doctors removed my left kidney through my back, taking a piece of my rib with it.

I won't lie, waking up from that surgery was the most excruciating pain of my life. They categorize it as being 8 to 10 times the pain of childbirth.

Healing from all the muscle pain was such an emotional process. I don't think anything truly could have prepared me for that. It took about 12 weeks to heal completely, but for Sam, it happened so quick.

The doctor reported that the instant the kidney went in, it began working for him. Sam went from having two kidneys that only functioned at 8%, to having one work at nearly 100%. Within days he looked the healthiest I had ever seen him. It was the greatest feeling in the world.

Here it is 6 months later and you can't look at either of us and tell we went through such a major procedure.

I didn't really know what I was doing, but I knew that I couldn't watch my best friend lose someone. I love her way too much.

Now, we are all family. Sam is so healthy and back to work, running his restaurant. The experience is one I consider "painfully amazing." A true and utter miracle. I gave my kidney to my best friend's stepdad and it's the best thing I ever did.

From Your Site Articles
Related Articles Around the Web
health wellness
Report this Content
This article has not been reviewed by Odyssey HQ and solely reflects the ideas and opinions of the creator.

A Letter to past Generations