12 'Friends' Episodes That Will Have You Laughing Until You Cry

I have watched the entire "Friends" TV series and I love it so much. 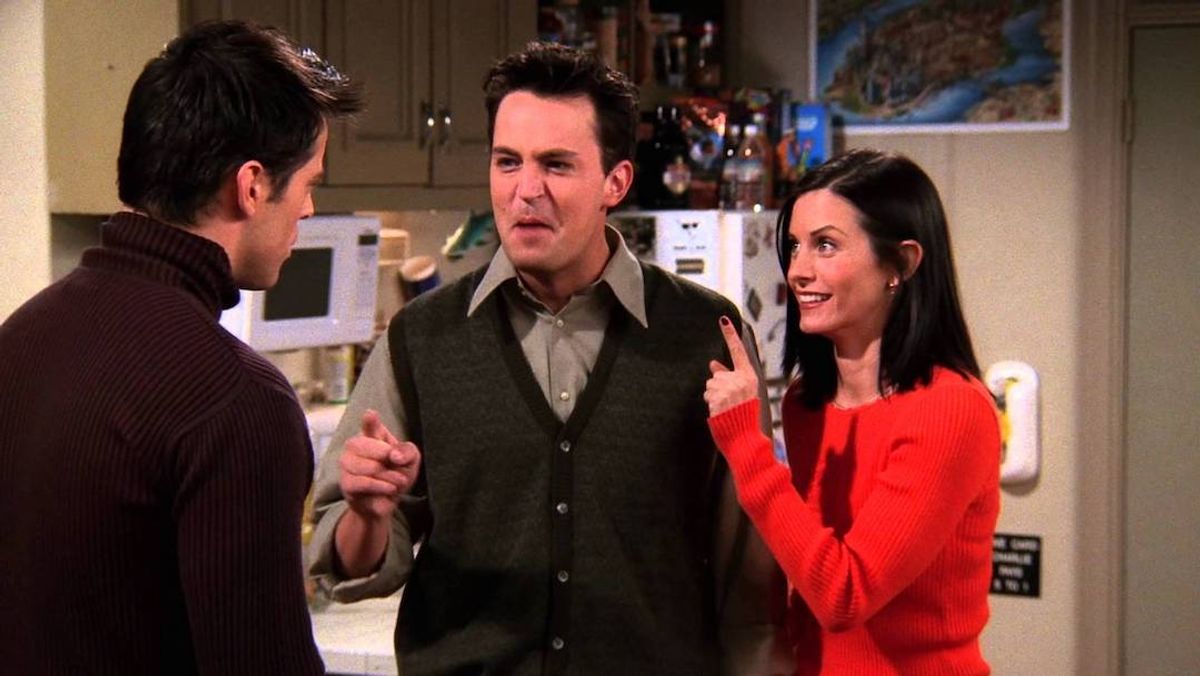 I have watched the entire "Friends" TV series and I love it so much that sometimes when I am with my own friends or eating a meal in the dining hall, I watch random "Friends" episodes. I usually just click on any of the seasons and then pick a random episode without knowing what it is about.

However, if you want to watch episodes that are really funny, here's a list from someone that knows the entire show pretty much by heart. Hint: that someone is me.

1. The One Where Everybody Finds Out

Season 5 Episode 14. Probably the best episode ever! Everyone knows about Monica and Chandler except Ross. "... Do you think that they know that we know that they know?"

2. The One With Ross's Sandwich

Season 5 Episode 9. Someone keeps taking Ross's sandwich at work and he isn't going to stop until he figures out who it is.

Season 10 Episode 3. Ross wants to get a tan so he goes to the spray tan salon... but his tan is a (little) uneven. The front of his body is like 8 shades darker than his back now, and that's only one more thing to feed Ross's amusement.

4. The One Where No One Is Ready

Season 3 Episode 2. Ross is getting extremely impatient as they have to leave NOW and no one is ready. Probably the best part is when Joey goes and wears all of Chandler's clothes at once.

5. The One Where Ross Got High

Season 6 Episode 9. Monica's parents don't like Chandler because Ross told them that one time when he was smoking weed that he was smoking with Chandler. Monica outs the truth and Ross is in troubleeee. Also Rachel accidentally combines two recipes and accidentally makes a dessert using beef. Not yummy.

6. The One With Rachel's Big Kiss

Season 7 Episode 20. We believed that all men thought Rachel was extremely attractive, but so do women. Rachel's friend from her sorority comes to visit and confesses her love to Rachel and kisses her.

7. The One With All The Resolutions

Season 5 Episode 11. In this one, Chandler makes a New Year's resolution to not be sarcastic anymore. It's a lot harder than we would think for him to keep that up, and it's hilarious.

8. The One With The Holiday Armadillo

Season 7 Episode 12. Ross wants Ben to appreciate Hanukkah so he dresses up as the Holiday Armadillo to educate Ben about the holiday.

9. The One With The Blackout

10. The One With The Prom Video

Season 2 Episode 14. Ross has always had a thing for Rachel but poor guy never got a chance with her then. What happened at prom with the friends? You find out in this one.

11. The One With The Flashback

Season 3 Episode 6. Janice asked the friends if any of them have almost hooked up with each other and this episode gives us a flashback of a time that one of the friends almost "did it" with another one in the group.

I know these are my favorite episodes and it was really hard to narrow it down to only 12, but here you go. I hope you enjoy them as much as I do and I assure you're going to be laughing until you cry after you watch them.

Glorie Martinez
1085
Why I Write On Odyssey