The One Where 'Friends' Is Actually About College

The One Where 'Friends' Is Actually About Freshman Year Of College 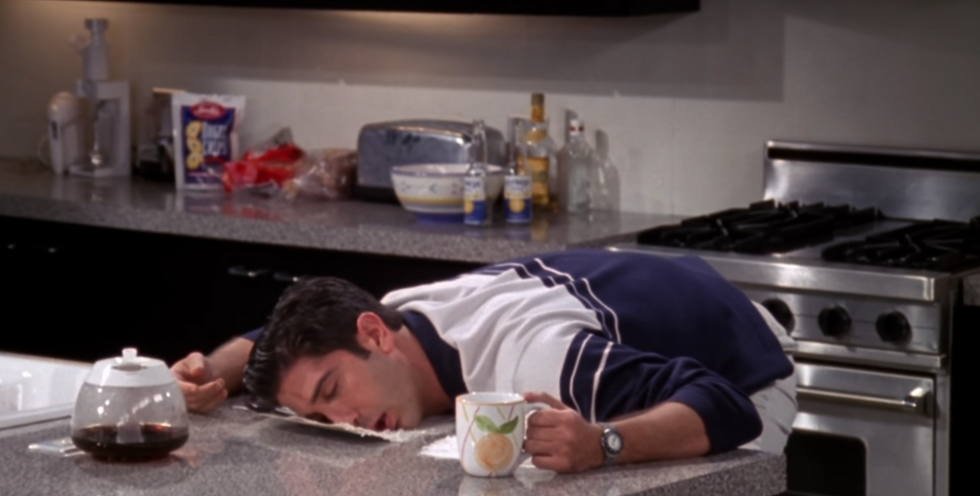 The first time I watched "Friends," I had just turned thirteen. As an eighth-grader, I thought I knew exactly what the characters were talking about. I related to their struggles, laughed at their jokes, and felt I had friendships much like theirs.

This summer, I have decided to re-watch "Friends." It's been a few years since I really sat down to watch an episode, likely due to new classics like "The Office" and "New Girl" fighting for my attention, so I was taken by surprise by how much I actually enjoy each episode.

Whereas "Friends" used to be a fantasy about "grown-ups" living in Manhattan, it is now parallel to my previous year as a college freshman. I may not have Rachel's iconic hair or Ross's pet, Marcel, but I do have uncertainties about the future and a group of friends I have grown to love like family.

It used to amaze me how the six friends were always together on the show, practically barging in on each other in their apartment's and having an unspoken agreement to meet up at the local coffeehouse during any free time they may have. Now, after a year of college, I'm not surprised at all.

Maybe our hangout spots weren't as chic as Central Perk (although the amount of coffee we assumed in the dining hall could be argued to make up for it,) but they did become unspoken traditions. There were few nights when we all did not gravitate to a lounge in our dorm building or knock on a friend's door and ask to come in simply because we were bored and had nothing better to do at 11 P.M.

Writing it down, it sounds rude, but it was just how we rolled. We treated each other like family. The concept of having such close friends was foreign to me just a year ago, but having lived with these people for a year, it seems perfectly normal.

Of course, with such interactions came conflict at times. Some of us didn't click naturally, but that could be true with any group. I mean, in what world would Phoebe and Rachel choose to be friends? They are polar opposites!

Then there were a few of us who got in fights, a few of us who tried dating within the group, and several (literally all) of us who had beef with someone we were too scared to say to their face. But that's just how friendships work! We could be mad at each other one day and then best friends the next. It's not weird; it's life.

Speaking of life, we have almost no clue what we are doing

Basically, everything is new and exciting, while also unfamiliar and terrifying. Living on your own is fun, but it comes with a lot of learning. Just as Rachel spent the entire first season learning how to take care of herself, I spent the majority of my first semester coming to terms with the fact I didn't have a bedtime, but I had so much work to do that I barely slept anyways.

Luckily, this chaotic period of time where I am still confused about whether to call myself a teenager or an adult will not last forever. (For real, what category do nineteen-year-olds fall in?) Just as the "Friends" all grew up, settled down, and figured the whole life thing out, I am beginning to as well.

I may not have flawless '90s hair, a flashy job in Manhattan, a boppin' wardrobe, or a trendy coffee shop I frequent, but I have a solid group of friends and a whole lot of learning to do. If the group can navigate the couch up that narrow stairwell, then I think I'll be okay to navigate the next few years.