To The Friends I Thought Were Real
Odyssey
CurrentlySwoonLifestyleHealth & WellnessStudent LifeContent InspirationEntertainmentPolitics and ActivismSportsAdulting
About usAdvertiseTermsPrivacyDMCAContact us
® 2023 ODYSSEY
Welcome back
Sign in to comment to your favorite stories, participate in your community and interact with your friends
or
LOG IN WITH FACEBOOK
No account? Create one
Start writing a post
Relationships

To The Friends I Thought Were Real

From the girl who used to want to be your maid of honor. 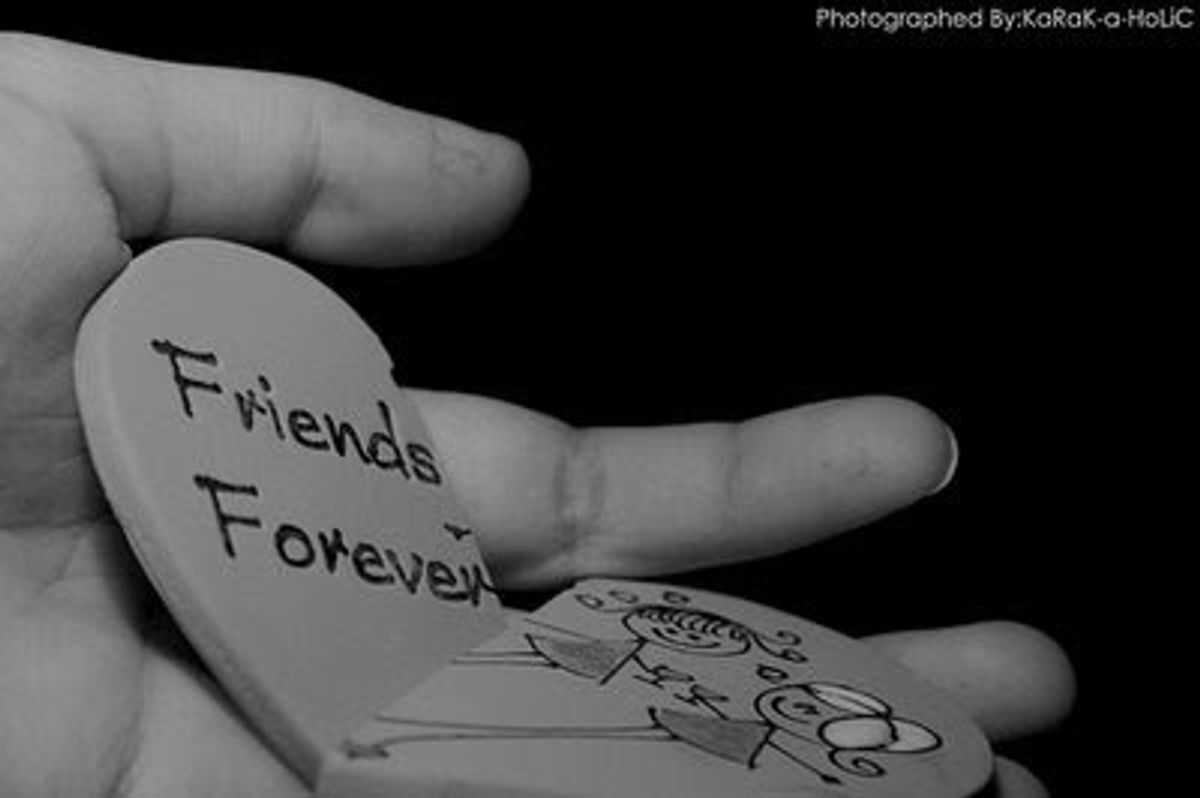 Dear friend I thought was real,

I remember when we first met; I never thought we would be this close. We started off as roommates, then became best friends. We know everything about each other and talk about everything. There’s nothing we won’t talk about, and there’s nothing that we don’t know about each other. There were many nights we stayed up talking and laughing. I was so happy to have a friend like you. We saw each other every day, and if we didn’t see each other, the day felt incomplete. That’s how much we valued each other.

Even if you spent time with your boyfriend, I was there. I was not the awkward third wheel, but rather I was part of the relationship. It felt like we would be friends forever. And ever. We planned to be grandmas rolling down the hall of the nursing home in our wheelchairs. You can kill the spiders for me and I’ll be your alarm in the morning when we are roommates again in the nursing home.

You said you will be there for me and love me forever.

That was a lie.

You blame me, but there are things you don’t know. So here’s the story:

I met a boy. He was a bad boy. He had a past and he has been with many women. In your opinion, he’s wrong for me. I don’t blame you for thinking that, because on first sight I knew he was wrong. It was because he was wrong, that it felt right. Let me tell you some things you didn’t know. I might have good grades, I might not drink, I might be single, I might have been a good girl to you, but that’s all a show. I live up to that life. Ever since I was young, I had strict parents. They set high expectations and made me become a good girl. That’s not who I am. I’m not saying that I am a bad girl or bad “person.” I’m saying that there are things I want to do but never had the chance to do because I was restricted.

Meeting him gave me the chance to become who I am, who I really am. He was older, he has a past, and he has issues. He was the bad boy I always wanted. He got me alcohol because he can. With him, I am able to be myself. He showed me stuff you would not approve of. He showed me the other world that I got excluded from. I finally was able to do things that I wanted to do. I evolved and became who I wanted to be.

So, no doubt I changed compared to when you first met me. It wasn’t a crazy change, in the end, I am still me. I may have new experiences and new likes and possibly a new attitude. Ok, yes I changed, but my love for you hasn’t. I still care about you friend. I still want to be your friend.

Now it’s too late. We still talk, but things are different. The atmosphere is different, and you blame me. I was the one who changed; I was the one who stopped trying to keep the friendship alive. Now whenever we “hang out” we aren’t as close as we use to be. We hardly text anymore. When I try to talk to you, I know deep down you are mad. You want the old me back.

That’s ok. Just know that I still love you.

The guy I met changed my life. He was my first love. I never knew I was capable of loving someone so much, and it was possibly because of how he accepted me as who I am. Who I really am. No other person on this earth has known the real me. I’m good at masking my inner thoughts. Though we cared for each other, he and I broke up. I had a miscarriage and we realized we aren’t meant for each other. It still hurts. I’m in the process of letting go.

I never told you because I know you will not forgive me. I stopped trying to save our friendship because I realized you are happier without me. If you are happier then blame me. I’m ok. I lost my child and my first love, but I am strong. I still have other friends.

What hurts me the most from our situation is how I thought you would love me no matter what. I thought when we said we would be friends forever, you meant it. It hurt me when you blamed me and gave up on. I thought friends were people who would stick by my side no matter what. Who would accept me and forgive me.

It hurt me when I realized I was no longer an important person in your life.

That’s life. People come and go. You gave me sweet memories to look back on and now I am stronger. I know who my real friends are. You might not ever read this, but just know that even though we aren’t the same, I still wish you well.

The girl who you used to want to be your maid of honor.

An Open Letter To My Favorite High School Senior