October 12th is Freethought Day, a day for our voices to be heard. 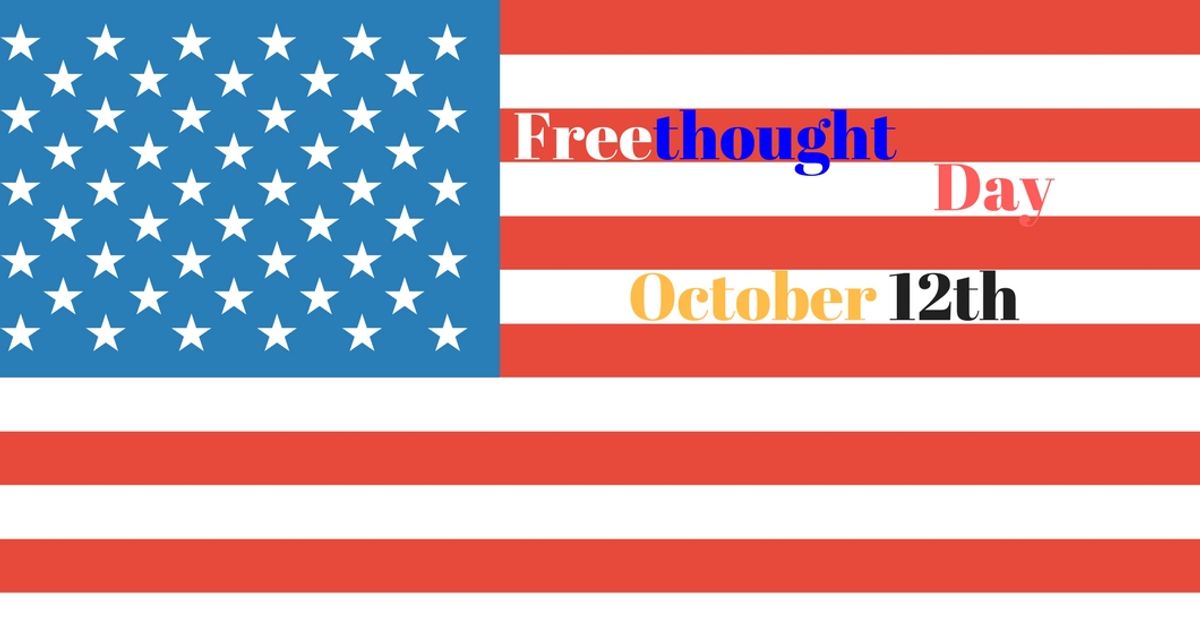 Created by T.L. Hicks through Canva

The Bill of Rights first amendment is the freedom of expressing ideas through speech (talking) and the press (writing, printing, blogging and broadcasting). It is for expressing through symbolic expression such as displaying flags and wearing armbands. But did you know, there is a day for free thinking?

October 12th is a day to remember and encourage one another to be free thinkers, and basing such opinions on facts, science, logic and reasoning. In today’s world, we are quick to jump to conclusions and speak our minds before knowing all the facts. Such ways of thinking and speaking can lead to ‘Fake News.’

On Sunday, October 1st, 2017 was a sad day for concert goers at the Route 91 Harvest Festival. A three-day country music festival ended when a man killed 59 people. Plus, over 500 people were injured. At the time of writing this article, all the facts are not known about the shooting. It was not long after reports of the shooting when the rumor mill started, from ISIS connections to gun control laws to the shooter’s mental state. There were reports of social media users passing around fake photos of unidentified victims as a joke (Qiu, 2017).

On Monday, October 2nd, 2017 everyone was already shaken up by the events of Sunday night’s mass shooting in Las Vegas. TMZ and CBS, along with other media sources, announced on Monday afternoon that Tom Petty passed away, and everyone started making their R.I.P. posts. The thing is, at the time of their reports, Tom Petty was still alive. Per Tony Dimitriades via CNN Money, the musician passed away, “at 8:40 pm PT surrounded by family, his bandmates and friends” (France, 2017). Roughly five hours or so later than reported by media sources.

Question: What does all this have to do with the first amendment and fake news?

Answer: Freethought Day, celebrated on October 12th every year. In some places, there may be a Freethought Week or a Freethought Month, which is October (Atheist and Other Freethinkers)

How did Freethought Day come about? Per Free Thought Day website, it dates back to the Salem Witch Trials. The Massachusetts Bay, Governor William Phips wrote in a letter to the Privy Council of the British monarchs, “the trials had degenerated into, in part by a reliance on "evidence" of a non-objective nature and especially "spectral evidence" in which the accusers claimed to see devils and other phantasms consorting with the accused” (Gutenberg, 2017). What did the Governor mean? William Phips was asking the British monarchs not to allow the use of spectral evidence (feelings and visions), but to use facts, science, logic and reasoning. In the modern-day court system, “the prosecution must prove, beyond a reasonable doubt” (Cornell Law School) that the criminal on trial is guilty, and in doing so they must using facts, science, logic and reasoning.

Free Thought Day is celebrated in Sacramento, CA, which is holding a three-day event. Starting with a Volunteer Dinner on October 12th. A Secular Leadership Day and a CFD Supporters’ Reception on October 14th, and wrapping it all up on October 15th, the event is in its 16th year.

The event is held by Atheists, Humanists, Skeptics, and Agnostics who believe religion and anything supernatural or “paranormal hearsay are preposterous” (Diskin, 2016). But what can the rest of us learn by such a day? Per Stephen Arons book Compelling Belief: The Culture of American Schooling, Quoted Thomas I. Emerson, "Every man—in the development of his own personality—has the right to form his own beliefs and opinions. Hence, suppression of belief, opinion and expression is an affront (insult, disrespect, or offense) to the dignity of man, a negation (denial) of man’s essential nature.” What we can learn from such a day, is that everyone has the right to their beliefs, and be able to speak freely. But, now with the ‘fake news’ being all over the place, it is time to stop and think before we speak. Make sure we have all the facts if we don’t then don’t saying anything. If it is a tragedy and loss of life, we should just give our condolences until we have all the facts to make an educated opinion. We need to research to make sure what we are ‘sharing’ on our Facebook accounts and ‘re-tweeting’ on our Twitter accounts is true, even if it is just basic information. We should respect what others have to say, even if we don’t follow their path.

[Image via Consitution US]

It could be just me, but we are living in a divided United States. The only people who can fix this nation is not our government, but “We the People” (Preamble). We have proven that when tragedy strikes us, no matter our race, culture, creed, religion or political beliefs, we CAN and DO come together. We should not have to wait for a tragedy to do so, it should be a part of our everyday lives.