Beyoncè And Kendrick Lamar: Freedom BET Performance Breakdown
Odyssey
CurrentlySwoonLifestyleHealth & WellnessStudent LifeContent InspirationEntertainmentPolitics and ActivismSportsAdulting
About usAdvertiseTermsPrivacyDMCAContact us
® 2023 ODYSSEY
Welcome back
Sign in to comment to your favorite stories, participate in your community and interact with your friends
or
LOG IN WITH FACEBOOK
No account? Create one
Start writing a post
Entertainment 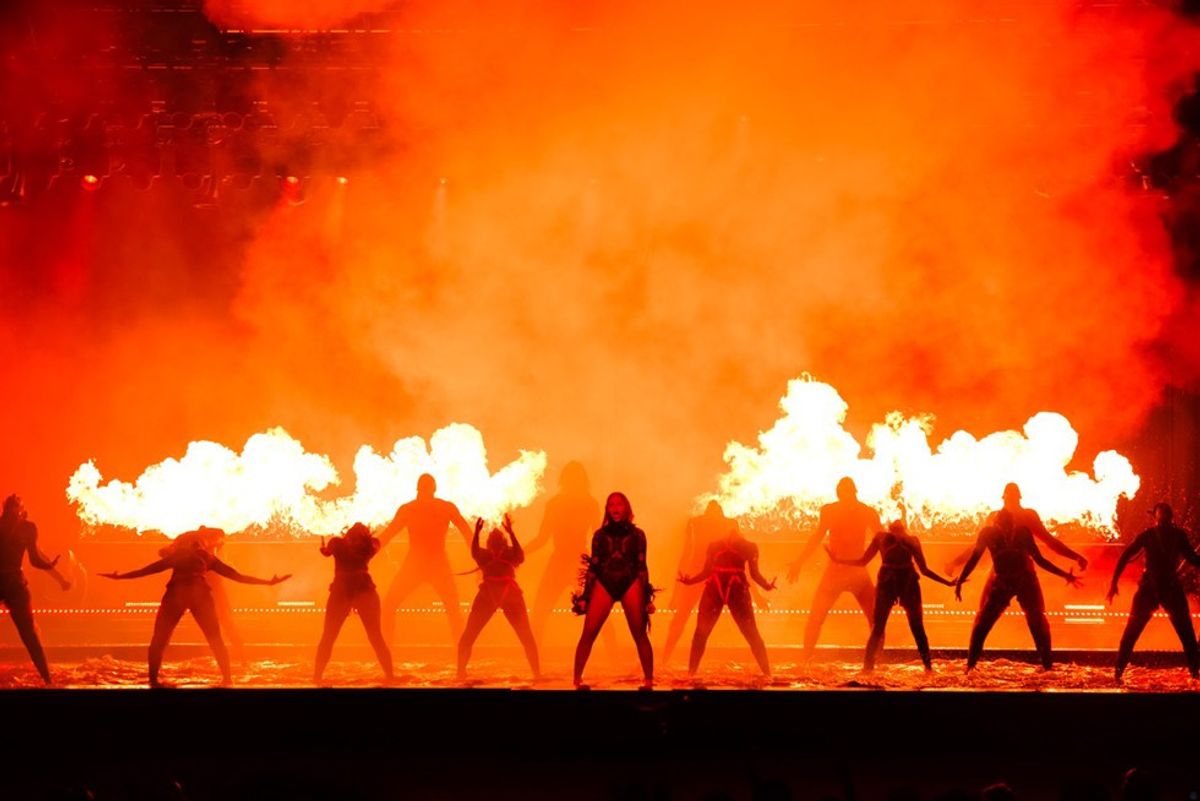 Beyoncè and Kendrick Lamar surprised everyone last Sunday with their surprise performance of "Freedom," the tenth track on Beyoncè’s new album "Lemonade." The performance and the song itself are both powerful and intriguing. They are laced with deep, meaningful symbols that many might have missed.

The performance starts with an expert of Martin Luther King’s I Have a Dream speech playing over the speakers while Beyoncè’s back up dancers march up to the stage. Her back up dancers, as is widely known, are all black women. In this particular performance there are black spirals decorating their skins, contrasting sharply with the white harnesses they are wearing. These white harnesses could be seen as a symbol of oppression. They are still bound by chains like their ancestors; bound by the chains of white supremacy.

The dancers all eventually come to stand in a line, Beyoncè in the middle. White light shines from behind her, giving her the appearance of an otherworldly figure. Then, you see that they are all standing in a pool of water. Beyoncè begins to sing, “Tryna rain, tryna rain on the thunder, tell the storm I’m new.”

Both the words she sings and the pool she and her dancers wade in evokes a stormy, thundering image. This could represent the storm of racial oppression African Americans have experienced since the time of slavery. It could also be seen as an allusion to Hurricane Katrina, a topic Beyoncè touched on in her "Formation" music video. There is also the distinct imagery of marching, with the dancers stomping in the water as she sings. This could be reference to the march to freedom.

In the chorus, Beyoncè asks, “Freedom! Freedom! Where are you?” before proclaiming that she can break chains all by herself. For years, the African American community has been fighting for equality. Despite the fact that America has come a long way since the days of slavery, many African Americans still feel that they are not free. So, Beyoncè asks Freedom, even after all this time, where are you? Then she lets Freedom know that if someone will not set her free, she will free herself. Beyoncè and her followers won’t wait to be emancipated any longer. They will emancipate themselves.

In the second verse, Beyoncè says she will “Wade in the water.” Here, she is referencing the 19th century negro spiritual "Wade in the Water," which relates to the Israelites escaping Egypt in Exodus 14. Many believed that this spiritual was used in the days of the Underground Railway to help slaves find the way to freedom in the north or south of the southern slave states.

Compounding this, according to the book Pathways to Freedom: Maryland & the Underground Railroad, Harriet Tubman escaped enslavers by getting into the water so her scent could not be picked up and tracked by dogs. African Americans are wading in the water to get to freedom, just as their ancestors did all those years ago.

Before the second rendition of the chorus, Beyoncè stretches her arms out wide. It is at this point that it becomes clear who she is emulating. It is the goddess Maat of ancient Egypt. The long tassels that rain down from her arms are a distinct representation of the wings of the goddess Maat. Maat is the goddess of truth, balance, justice and morality. This is Beyoncè’s way of letting her audience know that she has come to demand justice.

After the bridge, Kendrick Lamar rises from under the stage. Continuing with the theme of Egyptian gods, Lamar could be representing the god Osiris. Osiris is usually depicted with green skin, wearing white ropes. Lamar is wearing dark green pants and a hoodie of the same color, with a white shirt underneath. Also, Osiris is the god of the underworld, and Lamar rose from under the stage.

Osiris, along with Maat, is associated with judgement. According to legends, if, upon death, Maat found a person to be just, then they would be welcomed into the kingdom of Osiris. If not, they would perish. Perhaps, Beyoncè and Lamar are acting as judges here, telling the people of America that they have not been just in the treatment of African Americans.

After Lamar takes the stage, he begins to rap. He beings with a hope, “Revolution televised/hoping you’ll see the sign.” He and Beyoncè are trying to stage a revolution on live television, hoping it will lead to America changing her ways.

He then goes on to say, “Meet me at the finish line/40 acres gimme mine.” This is an allusion to the phrase “forty acres and a mule.” Forty acres and a mule were given to African Americans after the Civil War as a part of agrarian reform. Perhaps Lamar is saying here that the oppression of his people need to end, and, at the end of it, they deserve something good because of all they went through.

He also raps a bit about police brutality – which is nothing novel for Lamar. His performance of "Alright" at the 2015 BET Awards also alluded heavily to police brutality. In his verse in "Freedom" he raps, “Eight blocks left, death is around the corner/Seven misleadin’ statements ‘bout my persona.” Here Lamar is painting a picture. Anytime a black man walks down the street there is a possibility that death is around the corner; there is a fear that a police will see his persona and make an incorrect judgement about it.

He raps, “Six headlights aimin’ in my direction.” This refers to the lights on the police car. They’re coming after him. He then says “Five-O askin’ me what’s in possession.” Five-O is a common slang for police. The police have caught up to him, much like they have caught up to many of the young black men in this country.

Later he says, “Open correctional gates in higher desert.” It is common for prisons to be built in the middle of the desert. Lamar is saying that his people are being put into these correctional facilities. They’re fighting to get out of them, and just when they think they have made it, just when they open the correctional gates, his people find that the gates only lead to the middle of the desert. He is trying to show the false hope that African Americans are sometimes given. Just when they think they are free, they find that there is no chance for them to succeed because all that surrounds them is open desert.

At the end of his verse, Lamar asks the audience to open their minds and to cast away oppression, to change their ways and to welcome equality. The performance itself ends with Lamar, Beyoncè and the rest of the dancers stomping in the pit of water. Pools of water can often symbolize a birth or rebirth, a cleansing. Perhaps they are calling for America to be reborn, to be cleansed from racial oppression so they’re people can be free.