The last Friday of October is Frankenstein Friday 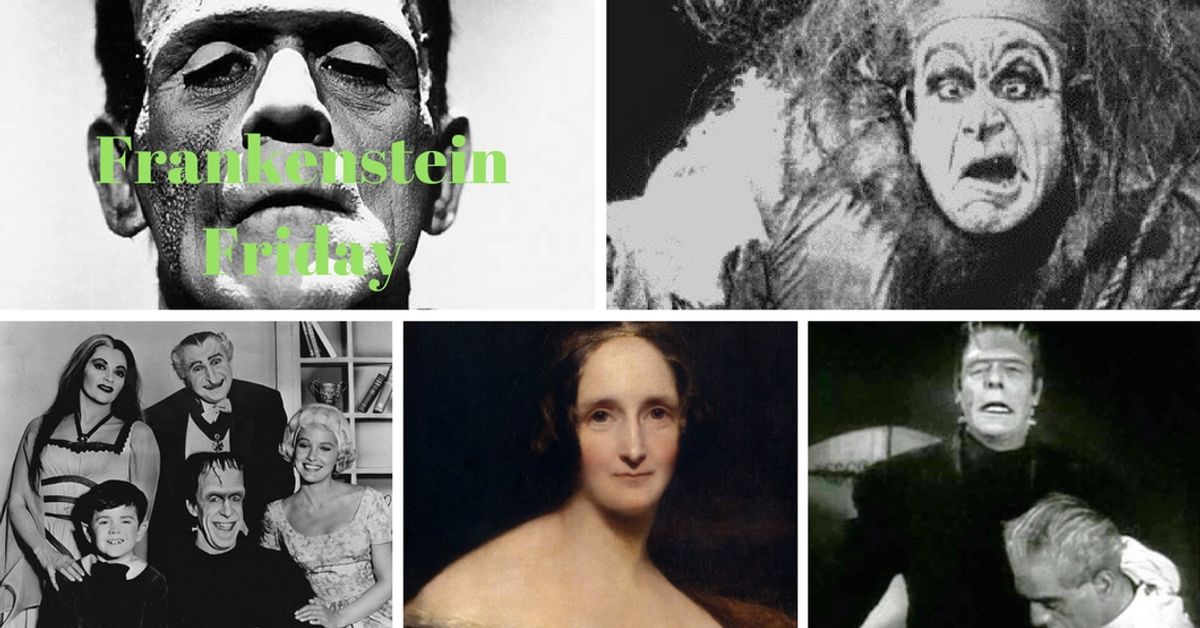 With Samhain and Hallowe'en just around the corner, it is no shock that one monster and his creator have their day in October. Celebrated annually on the last Friday of October is Frankenstein Friday.

Mary Wollstonecraft Shelley (1797-1851) composed a gothic novel (published in 1818) about a man, Victor Frankenstein, who is a brilliant scientist and is interested in chemistry and natural philosophy. Victor, fascinated by the human frame and wonders about the principle of life, he learns how to animate a lifeless body (Shelley, 40-41).

In November, Victor’s dream of life becomes his nightmare. The body Victor brought to life with “…limbs…in proportion,” and “…his features…beautiful.” “His yellow skin scarcely covered the work of muscles and arteries beneath; his hair was of a lustrous black, and flowing; his teeth of pearly whiteness; but these luxuriances only formed a more horrid contrast with his watery eyes, that seemed almost of the same colour as the dun-white sockets in which they were set, his shrivelled complexion and straight black lips” (Shelley, 44). When Victor saw his creation after waking from a nightmare, he realizes what he has done and runs out. Leaving his creation alone and confused, in which the creation leaves the apartment only to learn that society shuns and fears him.

Victor’s creation is known as ‘The Monster.’ ‘The Monster’ has killed people (in defense or revenge), yet has shown compassion. There was no one to teach ‘The Monster’ how to live, how to work and the difference between right and wrong. Something to think about on Frankenstein Friday, what do you think would have happened if Victor did not abandon ‘The Monster,” but nurtured him and taught him?

[Image from Wikipedia Commons. Charles Ogle as 'The Monster']

[Image from Wikipedia Commons. The cast of "The Munsters"]

It was not till 1964 when Ed Haas and Norm Liebmann gave a name to ‘The Monster.’ The name, Herman Munster, played by Fred Gwynne (1926-1993). He did not just get a name, but a family. His wife, Lily Munster. His son, Eddie Munster (How was a werewolf born to a vampire and Frankenstein’s monster, adoption?). A niece, Marilyn Munster. And let’s not forget, good ole Grandpa (Lily’s father). The whole family is known as “The Munsters.” In Season 2, Episode 26, Dr. Victor Frankenstein IV makes an appearance, he is played by John Abbott (1905-1996).

In May of 2017, Universal Pictures reveals a name for a series of films starring the classic monsters, “Dark Universe.” The series kicked off in June of 2017 with the release of “The Mummy,” directed by Alex Kurtzman and starring Tom Cruise. Bill Condon will direct a “Dark Universe” film, “Bride of Frankenstein.” Per IMDb, Javier Bardem will portray ‘The Monster.” Per IMDb, Dark Universe will make a “Frankenstein” film. The cast and crew are all unknown. All the movies are linked to the organization Prodigium, which is led by Doctor Jekyll.

Who is celebrating Frankenstein Friday? Pretend City Children’s Museum in Irvine, California will have fun activities for the children and learn the Monster Mash. Treasure Kids Academy in Orlando, Florida will have children dressing up like Frankenstein’s monster and his monster friends. In Edinburgh, United Kingdom, the adults will have their celebration. The Mash Tun will have specials and celebrating; it also kicks off their Halloween Charity Night, which starts on October 28th - 31st.


How can you celebrate Frankenstein Friday? You can stream “Young Frankenstein” and “Penny Dreadful” on Netflix. You can rent Frankenstein from a video store or YouTube. You can have a bonfire outside or warm up by a fireplace and read Mary Shelley’s, “Frankenstein.” Or, you can throw your own Monster Bash (pre-Halloween party), where everyone comes dressed up as the classic monsters. If you wish to freak people out on Franky Friday, just walk around town as ‘The Monster,’ and have his monster friends join along. Share your pictures on Facebook, Twitter, Instagram or whatever social media with the hash tags, #FrankensteinFriday and #FrankyFriday.