How to make you great aunt choke during dinner conversations

I think. Therefore, I shall question all that has been taught to be unquestionable. The surface of a lifelong argument, simple enough to create insignificant answers, hard enough to keep you thinking about your existence. 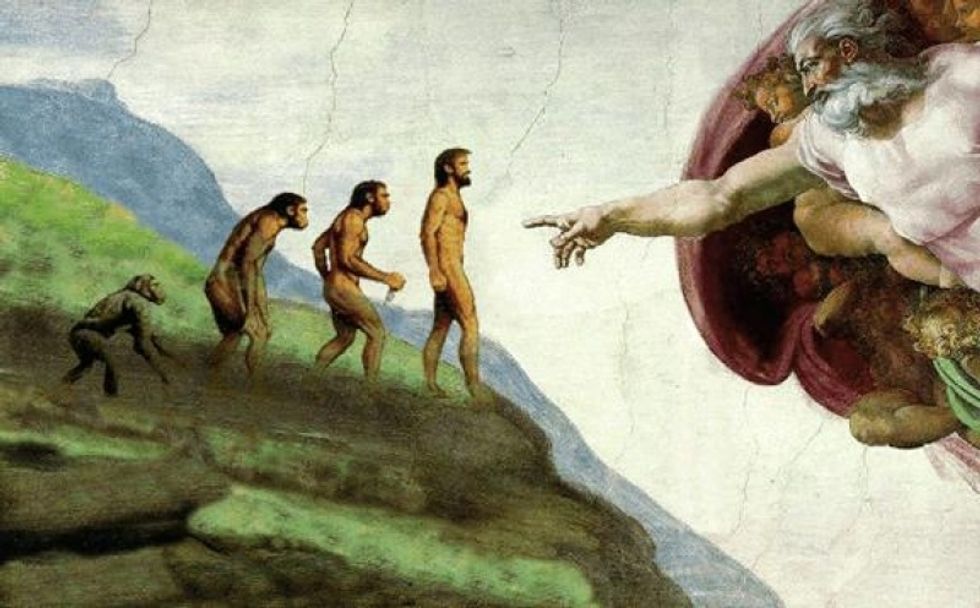 I've been questioned many times about my religious beliefs.

About how it is I can call myself a Catholic and endorse the evolving products of science that clash with the idea of a deity. This is where I find the question useless. I would say science and religion's only common ground is the human itself. I've had professors disregard religion as a mere construct of human order, and others profess science as a result of religious matters.

The issue with both views is not so much that one believes its ultimate truth, but the imposition of the ideas upon developing minds. The result of such matters is confused people, and often the tendency to choose a side. You can choose to follow A or B on the argument or rather stand apart and really attempt to comprehend each in its own light. The problem with having a competition on who made what and the origins of such is the moral conflict in the scientist who holds beliefs on a deity and science. How do I know that? Because I fall into that category.

I often attempt to understand science on a molecular and evolutionary view. At the same time, I hold on to a life of ethics, and the idea of free will. Such ideologies could have co-existed in peace, had they not been disrupted by the voracious necessity to claim the one true truth. We have both sides of the argument attempting to sell the best explanation. Ironically, both have disregarded the possibility of tolerance among each other. You could argue on a nihilist view of the matter, where one could possibly say everything is only but a fictitious construct established by man. However, both themes have come to set a specific answer, perhaps, to the human mind.

On the one hand, any religion, at its core urges for a moral and just individual. Regardless of the title, you choose to call your practice. On the other, it is because of science that one is able to be diagnosed with schizophrenia instead of being called possessed. It's time for people to realize that the answer to their somewhat idiotic question is simple: humans' religious practices are based on the idea of the unexplained aspects of morality, life, and internal peace. Science, on the other hand, are the facts, what has been proven.

Regardless of your views, you cannot turn a blind eye to the fact that your bread will get moldy if you leave it to rot, the same way you cannot disregard the peace it gives someone to pray or meditate. It is time one stops comparing and arguing about one or the other's true existence. I have seen people at hospitals say religion is useless, yet falling on their knees when science can no longer offer a solution. The same way I have seen people who don't believe in science, desperately resort to it to save their loved one. The point is, you cannot stigmatize one or the other because it becomes hypocritical the moment you desperately search for both.

Instead of attempting to test the scientist or the religious individual, ask yourself, how it is that both can co-exist in peace, and not be used as an excuse for social atrocities. It is natural to question the root of our beliefs in whichever branch of thought we incline to. We may not find the answers we hope to find, but rather the process of questioning and attempting to understand will begin to formulate a thinker within.

Grace McLaughlin
Florida Gulf Coast University
Photo by Sincerely Media on Unsplash
One of the most popular genres in literature that everyone has read at least one book from is Young Adult fiction. Now, I personally can say that, in the past, I have been one of those people that only read from the YA section of the bookstore.
While there is absolutely nothing wrong with just reading one genre, it's good sometimes to venture out of your reading comfort zone into the other book genres of the literary world.
In a previous article, I discussed the importance and power of words. The perfect example of this is literature and its impact on the world. Books have always played a crucial part in human lives, from how we are able to expand our knowledge to how we pass our time.
Literature holds so much power that there have even been time periods in our history where governments all over the world have felt threatened by its power and acted to eliminate it. But every time this has happened, people have acted and fought for the right to uncensor the knowledge they are allowed to learn.
Which is why I wanted to share my favorite books that have changed my life. These are books that have caused me to question and to learn. These are books that have influenced my life, and they are NOT from the YA genre.
Keep Reading... Show less
books
Featured